Would the Pandemic Stop Paul Theroux From Traveling? 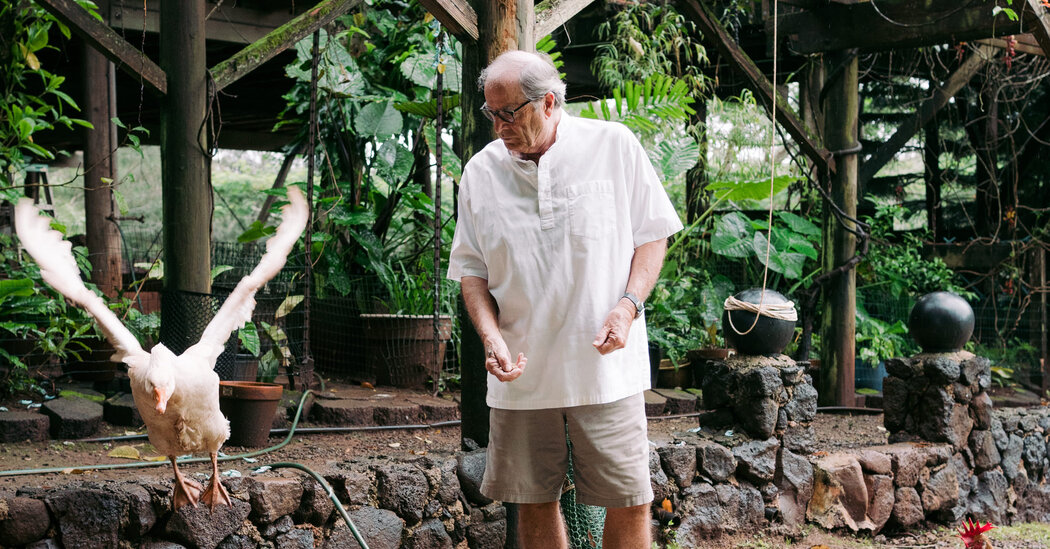 He had set out cross-country in a rented Jeep Compass on the day before Thanksgiving, driving from Cape Cod, where he has a house, to Los Angeles, where he delivered boxes of his papers to his archives at Huntington Library, and then flying on to Hawaii, his other home.

Theroux said he observed a landscape largely emptied out by the coronavirus pandemic, from deserted motels in Sallisaw, Okla., and Tucumcari, N.M., where he stopped to sleep, to a rest area in Tennessee where he had his solitary Thanksgiving meal, and the In-N-Out Burger in Kingman, Ariz., on his last day on the road. Every night, as is his habit, he wrote out in longhand all he had seen.

“It was like a panning shot of America,” he said in a video interview from the North Shore of Oahu, where he has lived off and on for over 30 years.

Theroux turns 80 in April. For a generation of backpackers now gone gray, the tattered paperback accounts of his treks through China, Africa and South America were a prod to adventure, bibles of inspiration under many a mosquito net. He has a new novel out from Houghton Mifflin Harcourt in April, “Under the Wave at Waimea,” and his best-known book (and his own favorite among them), “The Mosquito Coast,” has been adapted into a television series starring his nephew, Justin Theroux, also set to premiere next month.

If this seems like a moment to take stock of an intrepid life and an almost extreme output of writing, Theroux does not see himself as anywhere near done. Before Covid-19 struck, he had plans to go to central Africa. He is deep into another novel and finishing up a new story collection. He himself can’t seem to keep track of the number of books he has written: “Fifty-something maybe?” (It’s actually 56.)

Travel narratives are his signature, a genre he grabbed onto in the early 1970s out of desperation when, as a young novelist with a few books under his belt, he found himself out of ideas. He decided to traverse part of the world by rail, starting from London, where he was living, through the Middle East and as far as Southeast Asia, returning on the Trans-Siberian Railway. The account that emerged from this tiring journey, “The Great Railway Bazaar,” has sold over 1.5 million copies and inspired shelves upon shelves of books built on similar conceits.

In just the past decade, Theroux has written about driving solo through Mexico (he always travels alone) in “On the Plain of Snakes” (2019); an exploration of some of the poorest regions of his own country in “Deep South” (2015); and a trip to Africa, “The Last Train to Zona Verde” (2013), in which he returned to regions he got to know as a Peace Corps volunteer in the 1960s.

This genre — the outsider arrives and offers an assessment of the foreign — has lost ground over the years to travel memoirs like Elizabeth Gilbert’s “Eat, Pray, Love” that describe journeys of the internal terrain as much as the people encountered and places seen. Theroux, sitting at his desk scattered with artifacts of those trips — tiny Buddhas, the skull of a scrimshawed monkey he was given in Bali, wooden Polynesian weapons — defended his approach.

“It’s more necessary than ever to find the empathetic experience of meeting another person, being in another culture, to smell it, to suffer it, to put up with the hardship and the nuisances of travel, all of that matters,” Theroux said. He quoted the Nobel Prize-winning author V.S. Naipaul, who at various moments in Theroux’s writing career was a mentor and a nemesis: “I believe that the present, accurately seized, foretells the future.”

But there is no great thirst for prophets these days, particularly of the sort who offer judgments of other cultures. Theroux seems aware of this, or at least of the notion that his way of writing about the world is fading.

His new novel tells the story of Joe Sharkey, an aging North Shore surfer who resembles characters Theroux has gotten to know on the beaches near his home. Sharkey feels acutely that he is being overtaken by younger surfers with big endorsements. For him, surfing was a way of life, an existence centered on catching waves, a commitment to the ocean.

Theroux sees surfing as a metaphor for his own life. All he ever wanted was to be able to write without interruption, without the distraction of car alarms going off outside his window or bills arriving in the mail, without the need to do anything else for money but sit day after day at his desk. In many ways, Theroux has achieved this. But like the surfer past his prime, he is not immune to feeling forgotten, to the sense that the world has become hostile to the pure joy of the waves. There’s a fear of being overlooked, unread.

“I was once a hot shot, I was once the punk,” Theroux said. “And anyone who has once been a punk, eventually you’re older, and you see the turning of the years as it is. We all feel it, every writer. They might deny it. But they do, they all feel it.”

There was no sign of Theroux’s storied grumpiness. Critiques of his books have often touched on their cruelly ironic tone, a sense of condescension toward people he meets and fictional characters he creates. Take Stephen King’s assessment in The Book Review of the lightly autobiographical “Mother Land” from 2017, which King found to be an “exercise in self-regarding arrogance and self-pity.”

Theroux gets that readers might perceive him as cranky, but he thinks the problem might be with the readers. “You cannot be a grumpy traveler. You will not get anywhere,” he said. “You’ll be killed, you’ll be insulted, you won’t be able to travel. So you need to get along with people. I think that I’m characterized as cantankerous perhaps because if you see things the way they are, and you just describe things the way they are, you can be accused of being unkind.”

One of his oldest friends, the British travel writer and novelist Jonathan Raban, with whom Theroux has swapped manuscripts over the decades, thinks critics have missed an important shift in Theroux’s writing. “Compared to the tone of the earlier work, its sarcasm, its sharp observation and always being from the point of view of an absolute outsider, Paul has developed a kind of humanity in the recent books that I hadn’t seen before,” Raban said.

He pointed to a 2019 essay about a pet goose named Willy whom Theroux raised from birth and cradled in his arms as he died, the animal’s blue eyes gone gray, in a moment described with aching vulnerability. For Raban, this piece, like Theroux’s past few books, signals a move closer to the reader. “From savage sarcasm to tenderness is a pretty long journey,” Raban said.

Age has also played its role. Theroux sees advantages in it, like the older surfer whose decreased stamina forces him to search for new, smarter ways to ride his board — after all, Theroux points out, it was a man in his late 40s, Garrett McNamara, who surfed the largest recorded wave. Theroux can see how traveling as an octogenarian will have its assets. In some cultures, older people are invisible, a benefit in many situations, he said.

In other places he has visited, the elderly are treated with respect. “They either jump out of their chair and give it to you, or they just ignore you,” Theroux said.

What he most wants to do is return. There is value in making your way back to a country you visited when you were younger. It both marks time in your own life and acts as a sort of gauge for how a society is changing.

“It tells you about the direction of the world,” Theroux said. “What’s going to happen to the world? And you find that you can extrapolate that by revisiting a place that you knew well. Going back to England, going back to Malawi, going back to China, to India. It’s a fascinating thing. So if you ask me what travel I’m most looking forward to: I like going back to places.”