When New York Was Ours Alone 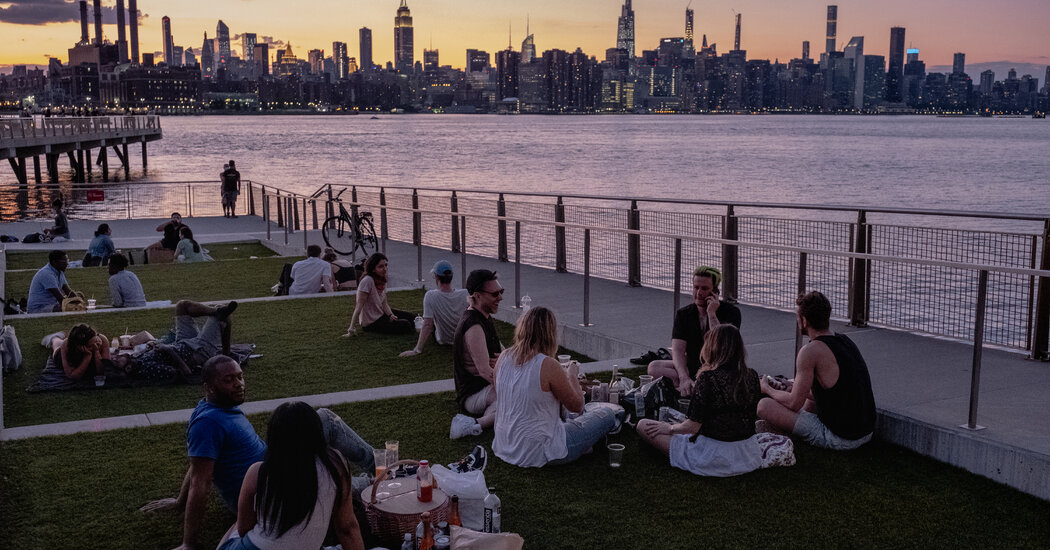 If you stayed in New York through the duration of the pandemic, you may remember the past year unfolding not in months but in chapters. There was the Incessant Sirens chapter. The Banging Pots and Pans Out the Window at 7 p.m. chapter. The Fireworks Every Night chapter. And, of course, the (sadly now ended) Strolling the Boulevard With a To-Go Cocktail chapter.

There’s also a bewildering, magical chapter that began sometime last summer. After the initial terrifying pandemic wave had crested, New York was left eerily quiet, nearly emptied of tourists, and re-emerging residents could experience our city in a way that most of us have never been able to before and probably never will again.

For an all-too-brief window, New York belonged to New Yorkers.

That chapter, too, is coming to an end. Last week, NYC & Co., the city’s tourism promotion agency, announced a $30 million ad campaign to lure tourists back. In 2019, tourism to New York hit a record high with over 66 million visits by domestic and international tourists. For context, that’s double the numbers of tourists in the early 2000s, when the city attracted “only” 30 million visitors a year.

This tourism boom was no accident: It was driven in part by the city’s refurbished image around the world; in part by a dogged sales effort led by NYC & Co., an agency turbocharged under Michael Bloomberg as mayor; and in part by that self-perpetuating phenomenon by which the more visitors flock to a place, the more the place slowly and inevitably reorients itself toward attracting and accommodating visitors.

The economic imperative for tourism’s return to New York is obvious. At its peak the industry employed 280,000 people and injected $80.3 billion into the city’s economy; Broadway alone generates $15 billion a year. But given that a city of eight million residents was absorbing over 60 million visitors a year, New York had increasingly become a city of, and for, tourists.

Last year, while in the grip of a pandemic that seemed, at least initially, specifically designed to cripple a big, crowded, nonstop, tourism-dependent city like New York, locals got a chance to experience a whole different version of our hometown. Or rather, we got a chance to rediscover the city we long ago fell in love with but that many of us may have feared we’d lost to the unceasing waves of interlopers.

First came a return to the outdoor attractions: a cautious trip to Coney Island in early summer, say, with only a few dozen stray people wandering the boardwalk’s vast expanse. The Bronx Zoo reopened last July, with timed tickets and reduced capacity, so, for a time, you could commune in relative privacy with rhinos and silverback gorillas, as though perambulating your own private nature preserve.

As fall approached, many of the city’s crown-jewel cultural attractions unshackled their massive doors. MoMA reopened on Aug. 27; the Met reopened two days later; and the American Museum of Natural History reopened two weeks after that.

Crowds were small and unintimidating. Traffic was often nonexistent. Tourists — the vast throng that typically jams these places by the tens of thousands — were nowhere to be seen.

And it was glorious.

At each venue, admissions were limited to timed tickets and capacity was capped, typically at 25 percent. This meant you could enjoy the disorienting experience of ambling with only a few hundred others through world-class galleries that typically attract 25,000 people a day. Alissa Wilkinson, a critic for Vox, wrote of her own tour of the city’s hallowed — and hollowed out — institutions: “In movies, empty museums often symbolize a world in which catastrophe has occurred.” But, catastrophe aside, what an opportunity! To have the whole of the American Museum of Natural History almost entirely to yourself!

A central irony of living in New York is that your proximity to world-famous cultural institutions is largely nullified by how arduous it is to actually get inside them. I’d often joke that there must be a German word for that particular New York experience whereby the moment you hear about some worthwhile attraction — the “Alexander McQueen: Savage Beauty” exhibit at the Met, “Hamilton” at the Public Theater (let alone on Broadway) — you simultaneously understand that your chances of experiencing it have essentially vanished.

This is a city, after all, where people would wait for eight hours to see Marina Abramovic at MoMA in a line so interminable that someone made a parody videogame about it. In the go-go prepandemic days, a hotel near the museum offered a “MoMA First Look” package that granted visitors exclusive off-hours access to the museum, thereby allowing even tourists to avoid the crush of tourists.

Maybe that’s why last year felt so revelatory in its emptiness. The city was undergoing a soft reopening, and only New Yorkers were invited. The High Line — a free amenity which at peak hours is so crowded that you can shuffle along shoulder to shoulder feeling like you’re exiting a sold-out stadium concert — became the subject of bemused videos about how enchanting it is to experience the park all alone. A colleague of mine, when observing a socially distanced Yom Kippur in September, decided on the spur of the moment to listen to his high-holiday services over Zoom while wandering the near-empty halls of the Met. Since he couldn’t go to shul, he told me, he went to the Temple of Dendur instead.

Or to put it in personal perspective: I have a 7-year-old daughter, born and raised in the city. Before the pandemic, we had visited the Bronx Zoo exactly once — which is one more time than we’d managed to visit the natural history museum. We had tried to go to the museum when she was younger, but we aborted the mission when we emerged from the subway to encounter an admissions line so long that I initially thought it was some sort of anti-museum picket.

Last year the moment the Bronx Zoo reopened, we bought a membership. We’ve visited at least a half-dozen times. My kid toddled off to the Met the other day with a friend and her grandmother; the grandmother’s been going to the Met nearly every week. (She highly recommends the Alice Neel exhibit.)

Since the natural history museum reopened, we’ve been back at least four times, this iconic destination (“The Squid and the Whale”! “Night at the Museum”!) becoming a dependable last-second rainy-day option available without arduous planning. The ability to roam the city and impulsively enjoy its uncrowded wonders used to feel like the provenance of children’s storybooks or rom-com fantasies. So it’s a remarkable feeling to live in a version of New York where you can ask your kid, “What do you want to do today?” and, when she says, “Go to the natural history museum,” you … actually can.

None of this is sustainable, of course. Museums can’t operate at 25 percent capacity indefinitely. Many cultural attractions — Broadway shows, live performances, even outdoor concerts — have had to stay shuttered this entire time. The local economy has become so reliant on tourism that the return of tourism is essential.

Also, even as we explored this unfamiliar empty city, we understood that the city was not itself. Unless you were born and raised in New York, there’s a good chance you’ve visited as a tourist. I visited often, and once I moved here, I liked to tell people that all the things that compel you to come as a visitor — the excitement, the attractions, the crowds, the noise, the sense of being at the center of it all — can make living here a maddening frustration. But that madness is inherent to the city. It’s part of what drew you here and what keeps you here. It’s what makes New York New York.

As this unlikely chapter ends — and tourism is already starting to rebound, with 36 million visitors envisioned for this year and a return to the 60-plus-million-visit days predicted by 2024, if not sooner — we might take a moment to appreciate this fleeting version of the city: one that, so battered by the pandemic, was briefly ours alone to enjoy.

As a first-time visitor told a reporter documenting the trickle of tourists returning to New York in May: “It’s kind of nice without all the people.”

Tell me about it.