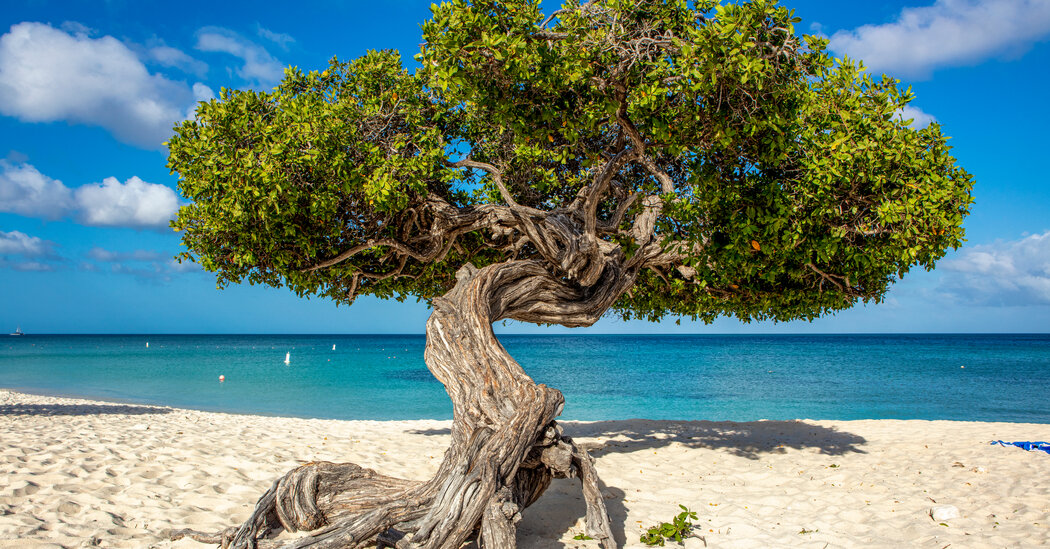 Last April, when Pat George, 70, wanted to take his family on vacation, he chose the Dutch side of the Caribbean island of St. Maarten. “It’s the first time in 35 years that our entire family has vacationed in the Caribbean,” said Mr. George, who runs a company called the Entertainment Agency in Massachusetts.

Many travelers, particularly those from the United States, were drawn to the Caribbean as a pandemic vacation spot for its proximity and relatively good record in curtailing Covid-19. While inbound travel was devastated in 2020, the number of international visitors in 2021 was much higher, at least for a subset of islands: 14 out of 26 Caribbean Tourism Organization member countries reported increases in international visitors in 2021.

Now, the islands are hoping to capitalize on their relatively strong showing, with the aim of converting people who sought a haven during the pandemic into return visitors. St. Croix, one of the three major islands in the U.S.V.I., will invest $244 million in revitalizing its west end, including the city of Frederiksted, which will get a new pier for tender boats, the smaller vessels that serve big ships.

“It’s an emerging tourism destination, unlike St. Thomas, which has several well-known resorts,” said Mr. Bryan. “But we have had a serious underground market of people who have been quietly coming here over the years; now it’s time for the regular traveler to experience St. Croix.” There are also plans to put potable water on the east side of the island, as well as to install a 40-megawatt solar grid for energy self-sufficiency within the next five years.

Developers like John Alexander, who runs a mortgage platform called Affinity Partnerships, have recently invested heavily in the island. He plans on creating more housing and will introduce the island’s first glamping outpost, Little Bay Eco resort, on 54 acres on the west end, with tented units similar to the style of Paws Up Montana, the well-known luxury camping resort.

Other Caribbean nations also boasted better-than-anticipated visitor numbers in 2021, including St. Lucia, which received 52 percent more overnight visitors than in 2020, with the U.S. market contributing 76 percent of them.

On St. Lucia, which added 20,000 new air seats from the United States between June and August 2021, construction of new accommodations is in full swing. Cabot Saint Lucia, a resort set to open in 2023 on Point Hardy, a 375-acre peninsula at the northern tip of the island, is one of the key new additions. It will include a golf club, residential community, 40-suite hotel, luxury condos and a golf course.

Aruba saw its tourism numbers begin to bounce back in July 2021, said Evelyn Wever-Croes, the island’s prime minister. Now the country plans to invest approximately $153 million in 2022 and $264 million in 2023 to ramp up accommodations. “While development has filled up the southern part of the island, our focus will be to balance out economic development on the island,” Ms. Wever-Croes said.

She also noted that the island’s “One Happy Workation” program, which allows visitors to stay on Aruba up to 90 days and work without any special visas, while taking advantage of hotel deals and offers, was successful in 2021; each month, 10 percent of the island’s visitors came as part of the program. It is continuing this year.

Aruba’s Queen Beatrix International Airport’s Gateway 2030 project is a plan to redevelop and expand the airport in various phases over the coming years. Construction of the first phase began in June 2021 at a cost of $136 million.

Across the region, the numbers of cruise visitors fell precipitously during the pandemic and trying to get them to return is a major priority. Some Caribbean nations resorted to more creative measures to attract cruisers.

Douglas Trueblood, the chief sales and marketing officer for Bermuda, said the island created a “home porting” agreement with select cruise lines like Viking and Orion that allowed guests to embark on a “cruise to nowhere.” “The guests come back to Bermuda and don’t have any interaction with other islands,” he said.

But tourism to the Caribbean is a long way away from normal, with visitors from several key regions — notably Europe, Australia and Asia — still largely absent.

Stewart Howard, the chief executive officer of Ambergris Cay, a private island resort in the Turks and Caicos, said Canadians have been notably missing from the Caribbean since March 2020 because they faced a mandatory quarantine upon their return to Canada and were not terribly keen on traveling through the United States for connecting flights to the Caribbean. “Almost all resort visitors were from America over the past two years,” he said. (Fully vaccinated Canadian travelers no longer have to quarantine when they return home, though they do need to test negative to enter the country.)

Mr. Howard noted that Ambergris Cay’s amenities will expand in the coming year to include a clubhouse, an additional restaurant and new suites to meet what he predicts will be strong future demand. “Now, what we’re seeing is aggressive bookings, but for stays in six to nine months,” he said.

Not all islands in the Caribbean saw visitor increase from 2020 to 2021. Some, like the Cayman Islands, Dominica and Barbados saw a dip in their overnight visitor arrivals for reasons, including how easy — or difficult — they are to reach. Before the pandemic, Dominica was reachable only by small regional aircraft or by ferry. When one of the key inter-regional airlines, L.I.A.T., suspended all its flights in March 2020, the island was hit hard and has not recovered. In December, American Airlines launched the first nonstop flight to the island from Miami, raising hopes that visitor numbers would pick up.

Other destinations, like Trinidad and the Cayman Islands, closed their borders to visitors at the start of the pandemic and only opened for tourist travel in late 2021.

Proximity also played a role — the Bahamas is the closest island group to the United States and people wanted to be closer to the mainland for safety, according to a spokesman for the Caribbean Tourism Organization.

Visitors who were loyal to a certain Caribbean islands region also decided to stay home rather than visit a different destination. “It was very impactful when St. Barts closed for tourists last year in February,” said Stacy Fischer-Rosenthal, the president of Fischer Travel Enterprises, a travel agency. “That was a very popular destination for our clientele, but they didn’t pivot to another destination because St. Barts is unique.”

Other Caribbean islands, like the Dominican Republic, which saw nearly five million visitors in 2021, more than any other country in the Caribbean, are investing heavily in hotels to brace for what they expect to be even greater demand once the pandemic subsides. Luis Abinader, the country’s president, recently revealed that the Pedernales Tourism Development Project in Cabo Rojo — considered the first tourist destination in the Caribbean to be developed from scratch under a public-private partnership — will be carried out in four phases over 10 years, and with an estimated investment of more than $2 billion. The first phase will start with six hotel chains.

Smaller islands too, like Tobago, which has a population of a little over 60,000, plan on investing in infrastructure to attract tourists. The ANR Robinson International Airport Expansion Project there will include the construction of a new terminal and several other upgrades, including an expansion of the tarmac and a new car parking garage for $1.2 billion. The island also welcomed international flights in January 2022, when British Airways and Virgin Atlantic resumed flights from a key market: Britain.

With all the development, the islands hope they can coax visitors like Cate Misczuk, 29, who resides in Utrecht, the Netherlands, to return. She visited the Caribbean for the first time in November 2021, flying to the island of Barbados because her parents own a timeshare property there.

“I had no idea what to expect, especially Covid-wise,” she said. “But Barbados totally blew me away.”