What to Do This Summer: Denver 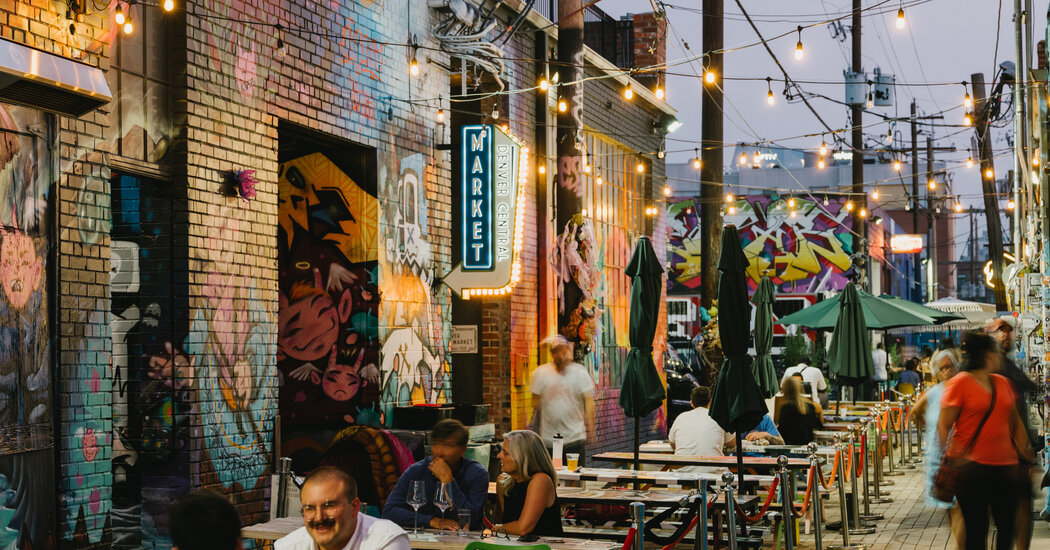 While many Denver locals head for the hills in summer — as in the nearby Rocky Mountains — others know that sticking close to home can be just as satisfying in this active, outdoors-oriented city. As events, live music and Rockies baseball games regain their status as popular draws, and patios, alleyways and newly closed-off streets welcome diners and beer enthusiasts, Denver feels fairly back to normal amid the lingering pandemic.

Currently, Denver is at the “clear” level on Colorado’s six-tier Covid-19 dial. Masks are required only for those unvaccinated in certain settings you’re unlikely to visit (think: prisons), though people who are not vaccinated are encouraged to wear masks in all public indoor settings.

In particular, two neighborhoods and one arts district — LoDo, Five Points and RiNo, respectively — merit exploring right now, thanks to new hotels and restaurants, and cultural attractions that can be enjoyed largely outside. All of them are served by Denver’s light rail system, and the city started a new bike and scooter share program in May.

The rehabilitation of Denver’s historic Lower Downtown, or LoDo, took off in the mid-1990s when Major League Baseball arrived and Coors Field, home to the Colorado Rockies, was erected. Former warehouses gained second life as restaurants, bars, lofts and offices, joining the city’s first brewpub, the Wynkoop Brewing Company (1634 18th Street), which was started in 1988 by John Hickenlooper, now a Colorado senator, and partners. (Interpretive signs on key buildings provide insight into the area’s history.)

The neighborhood received another jolt of energy in 2014 when Union Station was extensively upgraded, adding a hotel, restaurants and shops to the longtime transportation hub. Now more recent developments like McGregor Square, which began opening in March, and the Dairy Block offer even more to do.

A sports vibe dominates McGregor Square, beginning with the new 182-room Rally Hotel (1600 20th Street; rooms from $225), which lies 528 feet from Coors Field — just a bit longer than one of the blasts Pete Alonso hit to win this year’s All-Star Game Home Run Derby at the stadium. Baseball-inspired design cues range from subtle to overt, like glove-stitched leather headboards and Rockies memorabilia in the lobby (the team owner, Dick Monfort, partnered in the development).

The square also houses Tom’s Watch sports bar (with custom brews from AC Golden, a craft division of Coors), restaurants (including a second location of Carmine’s, a longtime favorite for family-style Italian) and a two-story branch of the Tattered Cover bookstore, a Denver institution beloved by bibliophiles. Above the stadium-shaped outdoor plaza, a large LED screen broadcasts Rockies games and other sporting events, as well as weekly free outdoor movies through Sept. 1. And, of course, the real thing is just across the street; the Rockies have several more homestands before the end of the season.

McGregor’s Milepost Zero food hall, however, currently lacks the appeal of the one across the street at the Dairy Block (1800 Wazee Street), where a historic building was transformed into a hotel, and where there are boutiques, restaurants and a lively food hall called Milk Market, run by the prolific Denver chef Frank Bonanno. A pedestrian alley bisects the blockwide complex, evoking a quasi-European feel with tables for outdoor dining, brick-fronted buildings, strings of lights overhead and murals.

Create a progressive dinner here, starting, perhaps, with flavorful achiote-braised pork tacos ($5 each) from BOH, the counter-service arm of the adjacent Bruto, which serves a seven-course, globally inspired tasting menu ($95) to 14 lucky diners at a time. Walk around the corner to the two-story, industrial-chic Foraged, where the local culinary star (and knife maker) Duy Pham elevates sushi with touches like a sliver of preserved Meyer lemon or a tiny dollop of truffle pea purée ($3 to $8 per piece). Top off with a scoop of tingly chili-dusted mango sorbet ($3.50) from Cornicello in Milk Market.

Skip the mayhem at LoDo’s cavernous bars (Jello-O shots, anyone?) in favor of the Dairy Block’s subterranean lounge, Run for the Roses. The rules posted at the check-in window (parties of six or fewer, guests must stay where they’re seated) didn’t seem to deter the crowd of cocktail enthusiasts on a recent Saturday night. Printed on a deck of cards, the drink menu includes classics like the Albertine (Cointreau, kirsch and Chartreuse, $13), and the soundtrack of 1970s funk and soul still allowed for conversation.

Usually described as a neighborhood, RiNo (for River North) is technically an arts district made up of portions of five neighborhoods in north Denver, said Tracy Weil, the district’s co-founder and executive director. Within a one-time industrial zone of low-slung buildings, RiNo’s 400 acres include not only artist studios and galleries, but more recently, a mushrooming number of high-end condos, hotels, co-working spaces, restaurants and breweries — many in refurbished buildings — that have given the area its hipster cred.

The district is spread out, and blocks are long, so it helps to have a destination in mind when walking (or hop on one of the popular Lime scooters favored by 20 and 30 somethings). RiNo’s website gives an excellent overview of where things are.

For a look inside many studios, check out the monthly First Fridays (6 to 9 p.m.). But RiNo’s best-known art form — an eclectic array of more than 100 outdoor murals on buildings, on shipping containers and in alleyways — can be viewed anytime. Denver’s intense sunlight, a result of the city’s mile-high location, seems to make these colorful artworks even more vibrant. A new interactive map, correlated with QR codes on the murals, gives details on the creators. The two-hour Denver Graffiti Tour (weekends at 10 a.m., $30) interprets some of the murals on a stroll through RiNo, while Zilla Charter hosts occasional tours led by the artists themselves.

In place of an annual festival that introduces new art, murals are now added monthly. Among the most recent: an installation created partly by local youth at the new Burton snowboards retail store (Walnut and 27th streets) and a series on garage doors (Blake and 29th streets), created by seven Colorado artists for Black History Month. Two graffiti crews are currently collaborating on a mural in the alley behind Denver Central Market (2669 Larimer), a bustling food hall and grocery, through the end of August.

Other art events include exhibitions at No Vacancy (2722 Chestnut), which, through the end of September, hosts 16 artists for four-month residencies in a warehouse slated for redevelopment this fall, and family crafting nights (Tuesdays through Aug. 24; free with advance registration) at RiNo’s new ArtPark (1900 35th Street), which officially opens Sept. 25. And at the Friday Night Bazaar outside the Ramble Hotel (5 to 9 p.m. weekly, through Aug. 27), a changing lineup of local makers sells wares, along with food trucks and a pop-up bar.

About those breweries: Since many don’t serve food (but do allow patrons to bring it in from nearby restaurants and food trucks), and guests must be at least 21 to enter. If it’s a weekend, visit during the afternoon rather than at night for a vibe that’s more lively beer garden than frat party. Try Our Mutual Friend (2810 Larimer) for a glass of thirst-quenching Riot of Color ($8), a Berliner-Weisse beer made with mango and lime, or have a cocktail made with house vodka, gin or whiskey in Block Distilling Company’s (2990 Larimer) cow-painted shipping container.

Named for the intersection of Washington, Welton, 26th and 27th streets, the neighborhood northeast of downtown Denver was once known as “the Harlem of the West” for luminaries like Billie Holiday and Count Basie who played in local clubs in the 1930s to the 1950s (one of these venues, the Rossonian Lounge, is being redeveloped into a hotel). Five Points was home to many of Denver’s Black residents for the first half of the 20th century and it remains a rich source of African-American culture and enterprise, though the racial makeup has changed.

The neighborhood is vast (and includes part of the RiNo Art District), but for a hub of outdoor dining and music — albeit still in transition — visit Welton Street, which has been designated the Five Points Historic Cultural District between 24th and 30th streets.

As new businesses take hold, restaurants, retailers and a yoga studio still alternate with empty storefronts. During brunch on the new Mimosas’ cheery back patio (2752 Welton Street), bright with colorful chairs and umbrellas, dishes included sweet and savory cheddar-topped scrambled eggs and housemade pork sausage served with potatoes and a fluffy waffle ($17), and, yes, five kinds of mimosas ($8 to $10). A few doors down, Welton Street Cafe (2736 Welton) has been dishing up Caribbean-inflected soul food for more than 20 years (honey hot chicken wings are a favorite) while Rosenberg’s Bagels and Delicatessen (725 E. 26th Avenue) buzzes on weekend mornings as patrons pick up their dozen. The secret ingredient? Water filtered to replicate that from New York City taps. Sherry’s Soda Shoppe (2716 Welton) serves a Brown Cow ($5.50) and other classic ice cream treats. One of the newest spots, MBP (for mood, beats, potions; 2844 Welton), offers entrees like blackened red snapper and New York strip steak, plus dessert martinis, on its back patio, as well as live music occasionally.

Among the neighborhood’s cultural institutions, Cleo Parker Robinson Dance celebrated 50 years in 2020; the company also offers classes for all ages ($8 to $15, preregistration required), including outdoor Zumba, and maintains a theater in a renovated church. Another cultural gem, the Black American West Museum and Heritage Center, is currently closed for restoration. You can get a glimpse into Five Points’s trajectory via a self-guided walking tour that highlights the neighbor’s history through short accounts and photos posted on some of Welton’s buildings, like the site of a former sporting goods and record store opened in 1939 by Leroy Smith, a radio D.J., music promoter and community activist. A new mural project this summer on the backside of Five Points Plaza (2756 Welton Street) includes portraits of jazz artists, baseball players and well-known residents.

Sit for a spell outside the Spangalang Brewery (2736 Welton) and sip a fruit-forward Welton Streetwine Cooler ($7) that’s like summer in a glass. Live jazz concerts on the patio, shared with the neighboring street-taco joint Agave Shore, take place on Wednesdays from 6:30 to 8:30 p.m. Visit Goed Zuur (2801 Welton) in a corner-front brick building for a charcuterie plate or the delectable stracciatella (mozzarella curd), served with honeycomb, sugar snap peas, lemon-verbena kombucha dressing and a baguette. Finish off with a corn cookie topped with crispy pork belly and rosemary caramel, an appealing blend of salty and sweet. One of some two dozen sour beers on draft makes the perfect accompaniment.