Want a Nice Dinner Out? Your Hotel Room Awaits 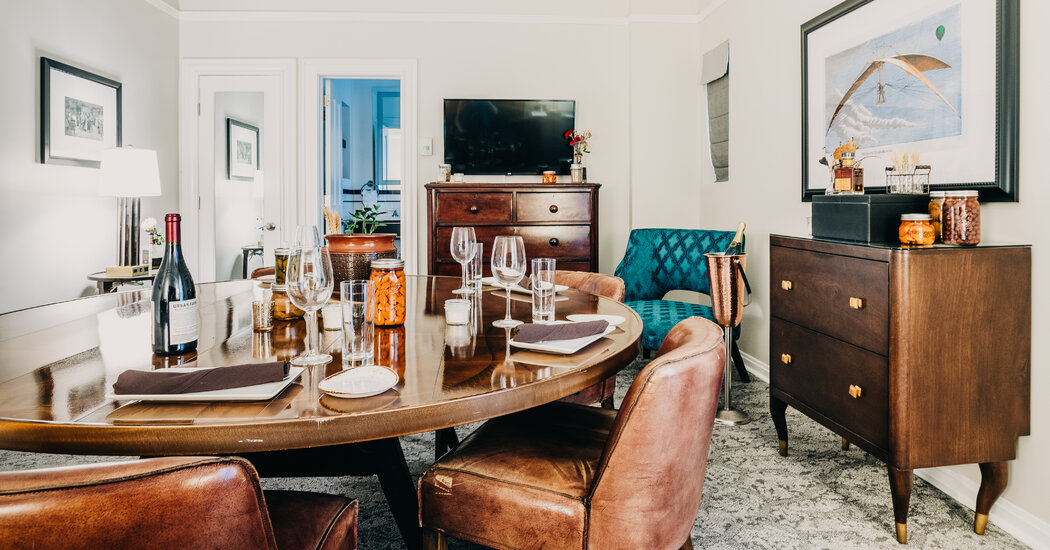 With New Year’s Eve approaching, similar partnerships have cropped up across the country. Here, some of what’s on offer:

After restrictions in Boston limited outdoor dining to private property, the UNI restaurant moved all its service to nine semiprivate rooms created by taking over the suites on the first two floors of the Eliot Hotel. The beds were removed and one table was set up in the bedroom and another in the front room, with French doors separating the two. Up to six guests per group dine a la carte from the sushi and sashimi menu created by the James Beard Award-winning chef Tony Messina, while the restaurant’s music is piped in to create a familiar ambience.

There is no additional fee for use of the room, but when a party wants the entire suite, there is a minimum $300 food and beverage charge per person. A special tasting menu is being created for New Year’s Eve.

Le Cavalier brasserie opened in the Green Room at the Hotel duPont in Wilmington, Del., during the pandemic. To help with social distancing, some of the hotel rooms are being used exclusively for private dining. Ordering for the family-style meals is done in advance, with a $380 dinner for two featuring two appetizers, two entrees, two sides and one dessert. Each additional person is $150 up to the maximum of 10. Guests can opt to stay overnight, a choice made by about half the diners.

A king bedroom for two with the dining special costs $500. A special New Year’s Eve menu that includes a bottle of champagne begins at $450 for two guests for the evening, or $600 including a night in a classic king bedroom.

In Denver, the Urban Farmer steakhouse has paired with the adjacent Oxford Hotel to offer what they are calling a “steakcation” in converted hotel rooms that have had the beds removed and replaced with dining tables for up to six people. For overnight guests, private use of one of the three dining chambers comes as part of a package that starts with rooms priced from $129, plus a $200 food and drink minimum.

For those not planning to stay the night, the dining rooms are rented for $100 for four hours, in addition to the minimum food charge. The full Urban Farmer menu is available, and on New Year’s Eve, specials will include options such as a charred octopus appetizer and a prime rib entree.