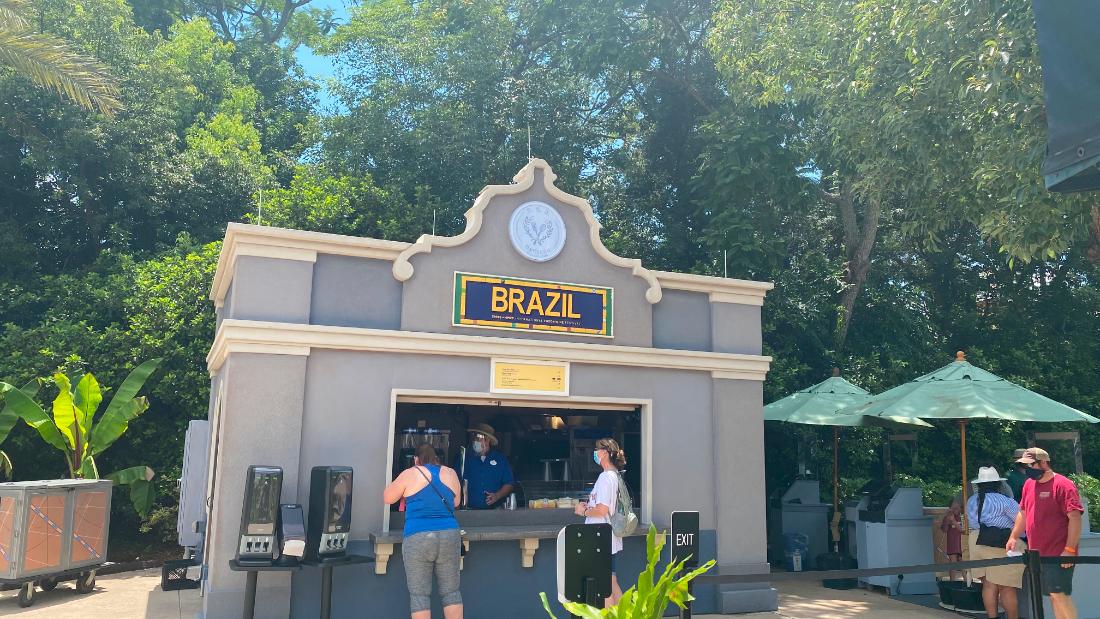 Disney maintained last week that its newly enhanced safety protocols — such as hand sanitizer, temperature screenings and social distancing — were sufficient protection to keep employees and guests safe in the resort’s hotels and theme parks.

And face masks were mandatory to enter.

Disney World guests must wear masks while walking — no exceptions to be made for eating and drinking.

The mask rule is still in effect, but it comes with a stricter footnote now.

Previously, Disney visitors were required to wear their masks at all times, except when actively eating and drinking.

The eating and drinking loophole meant guests could multitask — such as walking around the park sipping a soda or munching on a pretzel while they ambled to the next ride or moved along a socially distanced queue for a ride.

The update to the policy reads: “You may remove your face covering while actively eating or drinking, but you should be stationary and maintain appropriate physical distancing.”

The latest rule around masks has some people on social media questioning whether the park should be open at all. As one Twitter user put it: “JUST SHUT IT DOWN ALREADY FFS.”

“I can definitely see the risk in people using their beverages or snacks as an excuse not to wear a mask for a long period of time, but overall, I didn’t see many people doing that in the parks,” said Julie Tremaine, a travel writer who visited the Magic Kingdom and Epcot on their opening days.

“I did see a little bit of that in Disney Springs, though, where you can also get drinks to go and walk around,” she said.

The situation at Epcot

Guests arrive to attend the official reopening day of Epcot on July 15.

Of all the parks at Walt Disney World Resort, Epcot could be the most affected.

“I was especially concerned in Epcot, where eating and drinking around the World Showcase is one of the main draws to the park,” Tremaine said. “But people in general weren’t in walkways or too close to me while they were doing that.”

Tremain pointed out that on opening day, attendance at Epcot was sparse.

“I can imagine it would be much more problematic on busier days. Many of the sit-down restaurants are closed right now, and Epcot is relying on the kiosks from the Food & Wine Festival to feed people.”

Have a seat — if you can find one

Tremaine said her main concern with the plan is that the parks don’t have nearly enough seating areas at it is.

“It’s challenging to find a place to sit and have a snack at the best of times. I can’t imagine how hard it will be to navigate the parks in 100 degree weather this summer if you’re not allowed to drink water whenever you need to,” she said.

“I saw two Relaxation Stations in Magic Kingdom, but in a whole day in Epcot and a whole day in Animal Kingdom, I didn’t see any. But I also wasn’t looking for them specifically, Tremaine said.

“Ultimately, to me, it felt like an almost-normal Disney vacation,” she said after visiting on opening day.

But if the new mask protocol is a harbinger of further changes at Disney, it begs the question: At some point, will it stop feeling like a Disney vacation?

Julie Tremaine contributed to this story.