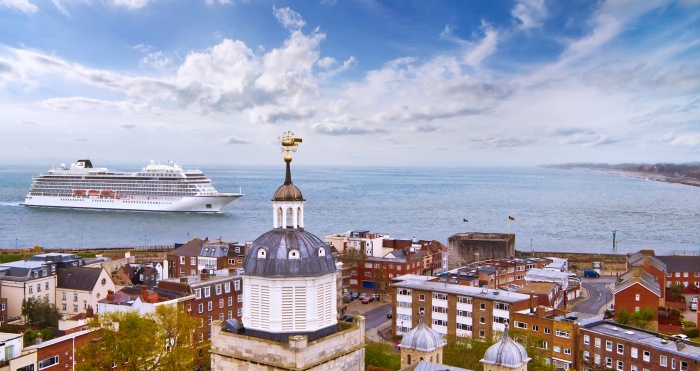 Viking has named its newest ocean ship, Viking Venus, with a celebration at sea in the English Channel as she sets sail for her inaugural voyage.

As part of the intimate event, the ship’s ceremonial godmother, revered British journalist and broadcaster Anne Diamond, offered a blessing of good fortune and safe sailing for the ship – a naval tradition that dates back hundreds of years.

In addition to commemorating Viking Venus, the event was also an important milestone as Viking returns to service following 14 months of paused operations.

This Saturday guests will embark Viking Venus in Portsmouth for the first of five roundtrip sailings of the England’s Scenic Shores itinerary in May and June.

“Today is one of the proudest days in Viking’s nearly 24-year history.

“When we became the first cruise line to suspend operations in March last year, we certainly did not know it would be 14 months before guests would be welcomed back on board.

“Now, we are among the first to set sail again – and with our industry-leading health and safety protocols in place, we believe there is no safer way to travel the world than on a Viking voyage,” said Torstein Hagen, chairman of Viking.

“On behalf of the entire Viking family, we are delighted to celebrate the naming of our newest ship in England.”