Upended by the Pandemic, Haute Chefs Move Into Hotels 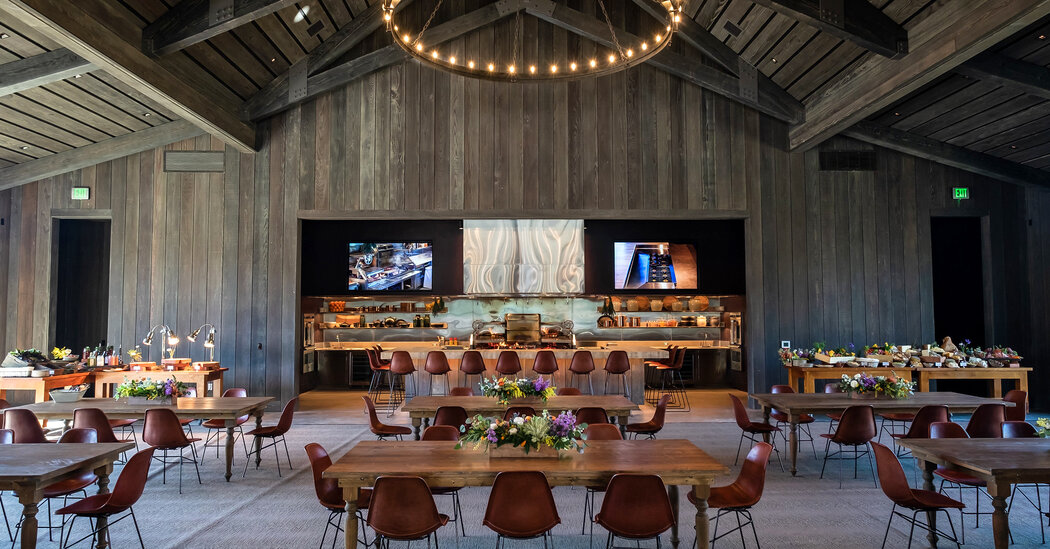 Yogis and nature enthusiasts have long flocked to Ojai, a verdant mountain enclave 90 minutes north of Los Angeles — gastronomes, not so much. That changed during the pandemic, when the Ojai Valley Inn turned its sprawling, indoor-outdoor farmhouse — formally a wedding venue before the coronavirus upended plans — into a stage for a revolving cast of high-end chefs.

Among the marquee names: Christopher Kostow, the executive chef of California’s three-Michelin-starred paragon of fine dining, the Restaurant at Meadowood. Located more than 400 miles to the north in Napa Valley, it burned down in a September wildfire.

“That, on top of Covid, gave us this feeling like, ‘God only knows what’s going to happen next,’” Mr. Kostow said.

To pay his staff, Mr. Kostow would have to set up shop elsewhere. Before the fire, he’d had the foresight to look into a Plan B outside Napa, aware that constantly shifting restrictions could keep businesses in wine country shuttered while other parts of the state were open.

It turned out that Howard Backen, the same architect responsible for the plush environs of Meadowood, had also recently built the Ojai Valley Inn’s Farmhouse, equipped with an open kitchen and state-of-the-art Viking appliances. One call led to another, and Mr. Kostow and his team decided to temporarily shift their operations to Ojai, where they engineered a tasting menu of can’t-cook-this-at-home delights like “champagne-bubbled” oysters and caviar dressed with eucalyptus and broccoli.

“I hadn’t been to Ojai before,” said Mr. Kostow. “It’s like what I imagine California might have been like in the 1930s: rolling hills, rustic, really bucolic.”

The partnership between the Restaurant at Meadowood and the Ojai Valley Inn exemplifies an accelerating trend: in the wake of the pandemic, hotels have become havens for high-end chefs. Whether displaced by disaster, like Mr. Kostow, seeking to make up for lost revenue, wanting to explore new markets or simply craving an opportunity to try out new things, well-regarded chefs are flocking to hotels not necessarily known for their cuisine. Last year chewed up and spit out the fine-dining playbook: now, there’s an opportunity for reinvention.

“Serving outside on a lawn or in a space that’s not your own is not ideal, but it does make you scratch your head, like, ‘Oh, this is cool. What other cool things could we be doing?’” said Mr. Kostow, who also owns a more casual eatery, The Charter Oak, in Napa Valley. “I think the result, post-pandemic, regarding fine dining, will be more license, more fluidity. All the old rules are blown up, at this point.”

“The Restaurant at Meadowood Residency” began on March 3. Over the course of five weeks, it got the culinary equivalent of a standing ovation: all 44 dinners Mr. Kostow presided over at the Ojai Farmhouse sold out, including a finale weekend of meals in May that featured wine pairings from the renowned Krug Champagne house and Harlan Estate, a famed Napa Valley producer of Bordeaux-style blends. Tickets for that dinner cost $999 per person.

“They sold out within the first hour,” said Ben Kephart, the Ojai Valley Inn’s director of operations. “It’s crazy. That’s about as much as you can charge for a dinner anywhere. It shows you how much of a demand there is, and it speaks to people wanting to get out and support a venture that they feel is deserving.”

One of Mr. Kostow’s March dinners in Ojai offered 13 courses, several pours of wine, and, maybe most importantly, the opportunity to dress up and people watch (from well over six feet away). It felt like the opposite of sitting on the couch, numbly chewing Postmates by the glow of Netflix. Apparently, people want that.

“We could have had a month of these dinners, straight,” said Mr. Kephart. “That’s how many people tried to book them.”

Besides Mr. Kostow, the Farmhouse has played host to chefs such as Nancy Silverton, the grande dame of Italian food in Los Angeles. Next month brings David Castro, the chef of Fauna in Baja California, which was recently honored by World’s 50 Best, one of the hospitality industry’s major ratings organizations, as well as Neal Fraser, the owner of the revered eatery Redbird in Los Angeles.

Across the country and south of the border this summer and fall, similar guest chef-resort collaborations are in the works:

Dominique Crenn, whose San Francisco restaurant, Atelier Crenn, holds three Michelin stars, will move her avant-garde French feast 1,500 miles down the Pacific Coast this month, to the Montage resort in Los Cabos. For six days, beginning June 15, Ms. Crenn will serve a menu of signature favorites from her restaurant reimagined with local Baja ingredients and flavors. It’s Ms. Crenn’s way of marking her restaurant’s 10th anniversary, and as part of the celebration, she’s organizing volunteering activities in the Los Cabos community through a local organization, and encouraging dinner attendees to join her.

The Bronx-born Mashama Bailey, who won a James Beard Award for best chef of the Southeast in 2019, and her culinary partner Johno Morisano will be traveling from their home base, Savannah, Ga., to Austin this summer and fall to launch two restaurants at the soon-to-open Thompson hotel, which promises guests “mid-century modern meets late-century luxury.” While the restaurants, The Diner Bar and The Grey Market, will be permanent, Ms. Bailey herself will be steering the kitchen on selected dates, to be announced.

Given the popularity of Los Cabos among Americans, who make up the bulk of the region’s international tourists, and its proximity to the United States, it’s no surprise that several top-tier chefs are flocking there. From June 28 to July 2, Jean-Georges Vongerichten — who has restaurants in Shanghai, Paris, Tokyo and several other cities, in addition to his two-Michelin-star hallmark in New York — will hunker down at the One&Only Palmilla, on the Sea of Cortez. At one of the property’s restaurants, Suviche, he’ll riff on traditional sushi and ceviche, at another, he’ll see to the searing of steaks as the waves crash and recede: surf and turf, à la Jean-Georges.

There will be no shortage of star chefs at the Waldorf Astoria in Los Cabos this year: June brings Chicago native Stephanie Izard, a multiple James Beard Award winner and the first woman to win Bravo’s “Top Chef.” In July, James Beard Award semifinalist Ronnie Killen will bring his Texas-style barbecue to the beach. October sees two more James Beard Award winning Chicagoans, Sarah Grueneberg and Mindy Segal, and in November, “Top Chef’s” Brian Malarkey will come on down from California. The Waldorf is calling it their Culinary Weekend Series and plans to continue these stints with notable chefs into 2022.

At the Michelin-starred Breslin and the now-closed Spotted Pig, April Bloomfield presided over some of the best pub fare in New York. When the pandemic hit, she searched for an outlet to continue her craft and help her staff. She found one in the Mayflower Inn & Spa, an Auberge resort in the bucolic Connecticut countryside. Her residency began in September and will continue for the foreseeable future.

“I’m excited for the next few months,” Ms. Bloomfield said, “and looking forward to growing the chef’s garden at the Mayflower this year.” She is, quite literally, putting down roots. Current menu highlights include cauliflower tikka masala and pan-roasted lamb chops with burnt satsuma and pistachio.

“It’s meant a lot,” Ms. Bloomfield said of her residency. “I’ve been able to hire some of my staff from New York and therefore keep them employed. It’s been great to have them experience the country and the produce it has to offer. We feel very grateful for the experience and to be of service.”