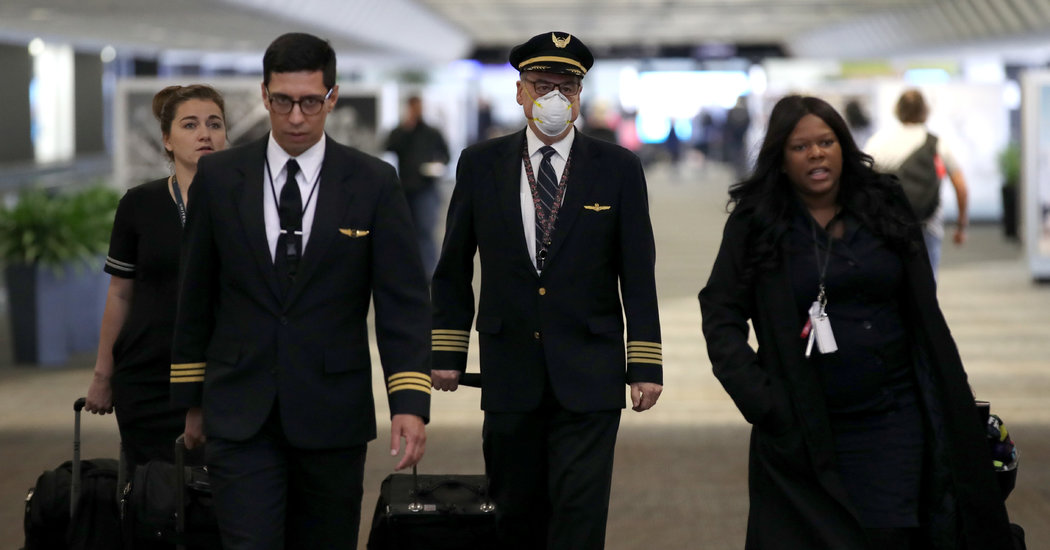 United Airlines said on Wednesday that it could furlough as many as 36,000 employees, or nearly 40 percent of its global work force, this fall if travel remained weak and more workers did not accept concessions like reduced hours or buyout and early retirement packages.

The furloughs, detailed in a memo sent to staff members, would be part of what were expected to be deep, industrywide cuts starting Oct. 1, when a $25 billion federal stimulus program for passenger airlines ends. That aid, intended to help cover payroll expenses, came with restrictions against substantial staffing cuts through Sept. 30.

“The reality is that United simply cannot continue at our current payroll level past Oct. 1 in an environment where travel demand is so depressed,” the airline told employees. “And involuntary furloughs come as a last resort, after months of companywide cost-cutting and capital raising.”

The furloughs would include about 15,000 flight attendants, 11,000 customer service and gate agents, 5,500 maintenance employees, and 2,250 pilots. United could cut fewer employees if ticket sales pick up significantly or if many thousands of workers accept fewer hours or apply for buyouts and early retirement packages before a mid-July deadline. Workers will know if they are being furloughed by the end of August, and most will be eligible to return to work when travel picks up. United is also cutting about a third of management and administrative employees.

“The United Airlines projected furlough numbers are a gut punch, but they are also the most honest assessment we’ve seen on the state of the industry,” said Sara Nelson, president of the Association of Flight Attendants union, which represents nearly 50,000 workers at 19 airlines, including United.

In a statement, Ms. Nelson called on Congress to extend federal aid “to avoid hundreds of thousands of layoffs from an industry that normally drives economic activity.”

For months, major airlines have been warning workers that they may have to make substantial cuts after the funding dries up, and most have encouraged employees to voluntarily accept pay cuts, buyouts or early retirement. Last week, American Airlines said that it expected to have about 20,000 more employees than it needed this fall, though the airline said that it may not end up furloughing all of those workers.

Even before Congress threw the industry a lifeline in March, United had warned workers that the coronavirus pandemic could force its hand. At a company town hall event that month, Scott Kirby, then the airline’s president and now its chief executive, said that United had two goals: survive the crisis and avoid furloughs. But he said he could not promise workers that their jobs would be secure.

Air travel has rebounded after falling about 96 percent in April, but the recovery has been choppy and is expected to remain uneven. The number of people going through airport security is still down about 75 percent compared with last year. Some experts fear that the numbers could start falling again as infections climb across much of the United States, including in California, Florida and Texas.

United on Tuesday said that it was paring the August schedule it announced only last week because bookings had begun sliding again amid the surge in virus cases and after New York, Connecticut and New Jersey said they would require travelers from states with rising infection rates to quarantine themselves for two weeks. United now expects to operate about 25 percent as many flights this month as it did last July and about 35 percent in August compared with the same month last year. The airline also said it expected the rest of the year to look much like August.

Like other major airlines, United has been making deep cuts wherever it can, postponing spending, grounding planes and freezing merit raises and nonessential hiring. Still, it is losing about $40 million in cash each day. Delta Air Lines is suffering similar losses, while American Airlines is losing about $35 million each day.

To manage what most in the industry expect will be a yearslong recovery, the major airlines have amassed huge war chests. United said last month that it expected to end June with about $9.4 billion in cash, compared with about $11 billion for American and more than $15 billion for Delta.

The airlines expect to continue building up those reserves. In addition to the $25 billion set aside to pay airline employees, Congress authorized an equal amount in loans for the industry. In the past week, American, Delta and United have reached agreements with the Treasury Department on loan terms under that program. American is the only one of those airlines to confirm that it will indeed borrow money, $4.75 billion, from the federal government under the program. Other airlines are expected to do so soon.