Travel Restrictions on Americans Erode a Sense of Passport Privilege 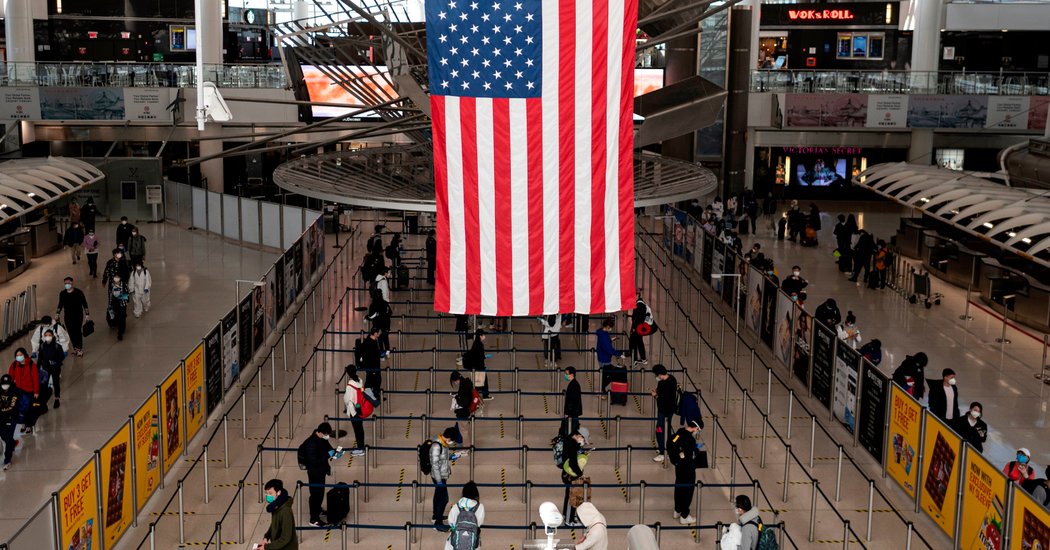 LONDON — Five American travelers who set out for a getaway on Sardinia were turned away last week after their private jet landed on the Mediterranean island. In Canada, two Americans were fined for flouting tougher entry restrictions imposed by their northern neighbor.

And in Mexico, governors are pleading with the central government to introduce tighter restrictions on travelers from the United States to help prevent the spread of the virus.

While coronavirus travel restrictions may vary from country to country, much of the world is united in one aspect of their current response: Travelers from the United States are not welcome.

A U.S. passport, long seen as a golden ticket to visa-free travel in much of the world, has long provided its holders with the ability to trot around the globe with ease. Now, that sense of passport privilege Americans are used to is fading.

“This is shocking, to see one of the most advanced countries in the world be put in the slow lane of the global reopening,” said Robin Niblett, director of Chatham House, the London research institution for international affairs.

Mr. Niblett said the fading power of the American passport was not surprising “given that America’s health care system is decentralized, unpredictable and unequal” and given how the virus continues to spread unabated in large portions of the country.

In a world where pandemic travel restrictions are excluding people from countries with uncontrolled coronavirus outbreaks, and where the United States continues to set daily records of new cases, the long-lauded American passport, once a symbol of power and exceptionalism, is becoming stigmatized.

Last week, when the European Union formalized a plan to restart travel from certain countries, visitors from the United States were notably left off the list, a stinging blow to American prestige. American citizens who live in countries on the approved list will be allowed to enter the European Union.

Travelers from the United States, like those blocked from the Italian island of Sardinia last week, are finding themselves unwanted.

The five Americans who had flown to Sardinia had come from Colorado, traveling with several people from other nations in a private jet to the Italian island. After five in the group were barred entry, everyone eventually left.

Dimitry Kochenov, a co-creator of The Quality of Nationality Index, which explores the benefits accorded to citizens of different countries, said the pandemic restrictions put into stark relief the restrictions that people of certain nationalities faced at international borders.

“Citizenship is the main factor behind preserving global inequalities today,” he said. “So of course the U.S. passport has always symbolized the ultimate level of this privilege.”

Mr. Kochenov, a professor of European constitutional law at the University of Groningen in the Netherlands, said the Sardinia incident showed that even the large sums of money needed to fly a personal plane to Europe could not “allow them to overcome the deficiency of the U.S. passport today.”

While a U.S. passport typically allows for visa-free movement in much of the world, Mr. Kochenov noted that European Union passports outrank it in quality because they grant holders the freedom to resettle anywhere in the European Union with full rights.

Until the recent restrictions, the U.S. passport had long provided its holders with an outsize sense of freedom that was the envy of others. The restrictions that Americans now face are “something that much of the rest of the world knows very well,” Mr. Kochenov said.

Some Americans say they have been surprised by the shift in perception toward American travelers during the pandemic, expressing concerns that it could be damaging, at least symbolically.

Vincent Rajkumar, a professor of medicine in Minnesota who became a U.S. citizen 15 years ago, said he has always been in awe of how the country’s passport had opened doors that were once shut to him.

During a trip to Australia in January, he was alarmed that passengers were being questioned extensively about whether they had been to China.

ShaDonna Jackson, a photographer from Maryland who has been vocal on social media about seeking dual citizenship, said she was spurred to act in part by the new restrictions on U.S. travelers.

“The perception of the U.S. right now in terms of how safe people are with the coronavirus spreading — I see how it can be scary to other countries,” she said.

Mr. Niblett of Chatham House noted the turn of events was unsurprising after the United States issued a broad travel ban for European visitors in March, which gave implicit permission for other governments to do the same against Americans.

President Trump’s abrupt decision, which was made without consultation with European leaders and without any warning, established the climate for the current travel restrictions on the United States.

“When it’s done in that incredibly indiscriminate way, then it’s not surprising you get this counterreaction from American allies,” Mr. Niblett said, adding that Mr. Trump had “set the stage very much for this. And to be honest, it’s tragic.”

The travel restrictions reflect the eroding relationship between Europe and the United States.

Since Mr. Trump became president, the trans-Atlantic relationship is “becoming more shallow” despite the decades of cooperation after World War II, Mr. Niblett said. Diplomacy has “become more transactional” and focused on the short term.

“And Europe now feels they have a right to be equally transactional in return,” Mr. Niblett said.

But the sentiment is not coming only from Europe. American travelers to Canada who have attempted to skirt border restrictions that ban all but essential journeys have found themselves equally unwelcome. They face fines or being detained for failing to comply.

Nova Scotia’s leader expressed frustration about travelers from America trying to circumvent restrictions by coming into the Canadian province.

At the Mexican border, there has also been a stark reversal. Typically on the receiving end of border restrictions, Mexico, alarmed by the spiking infection rate in the United States, has moved to stem the flow of Americans into the country.

Mexican states set up “sanitary filters”along the border during the July 4 weekend to check visitors’ temperatures and turn away anyone whose trip was not deemed essential. Officials in Mexican border states have pushed for more aggressive steps to reduce crossings.

Mr. Kochenov pointed out that simply focusing on the erosion of freedoms for American travelers missed the bigger picture. Many countries have introduced internal travel restrictions that limit movement among regions, states or other local jurisdictions.

And most of the current restrictions are expected to be temporary. Americans may not like having their travels limited for now, but it is likely to be for the short term. Others will continue to face a tougher reality.

“The majority of the population of the world will never be able to fly to Europe no matter what,” Mr. Kochenov said, because of visa restrictions or lack of money.

“The pandemic simply demonstrates to Americans what the rest of the world has already known about the main function of nationality in the world.”