Thunderous Plunges and Mossy Trickles: A Spring Guide to Waterfalls 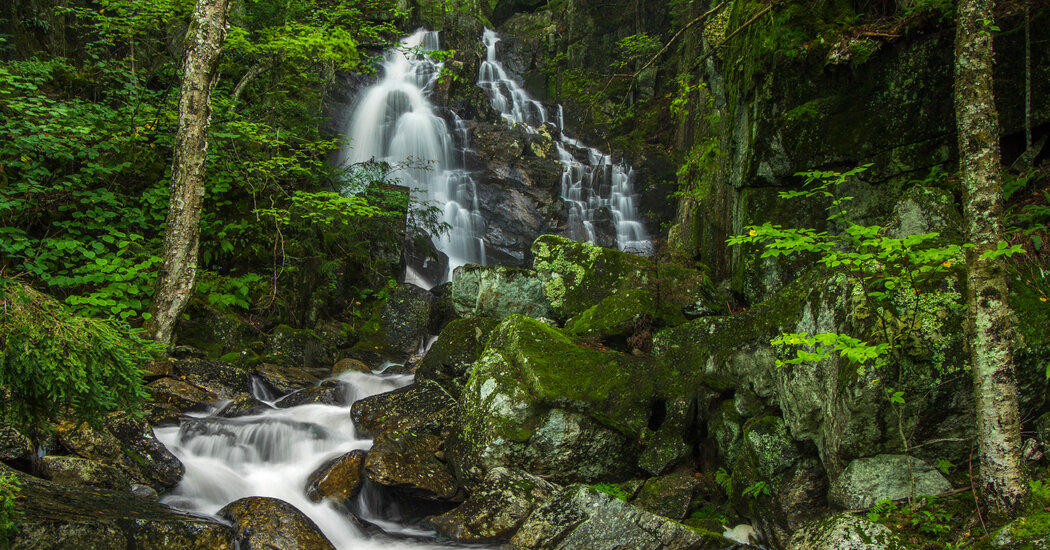 As fall is to leaf-peeping, spring is to waterfall-watching, a seasonal pursuit now underway in the northern and higher regions of the United States.

Waterfalls can range from thunderous plunges to delicate mossy trickles. They can be backcountry pop-ups or the centerpieces of parks, like Great Falls Park in McLean, Va., and Silver Falls State Park, near Salem, Ore.

There’s no agreed upon definition of a waterfall, according to Joel Scheingross, an assistant professor of geology at the University of Nevada, Reno, who studies those that detach from the bed of a river, creating an air pocket between the face and the water jet. Waterfalls, he explained, can be the result of glacial carving (as at Niagara Falls), or through faults in tectonic plates. Places where hard and soft rock mix often produce waterfalls pouring over a harder rock cap that carve away soft rock below.

“Any area where the water flow is dominated by snowmelt will get bigger waterfalls now, not just in the northern U.S., but at high elevations too,” Mr. Scheingross said. “If not snowmelt, you just need big storms.”

Especially now, perhaps, as pandemic-weary travelers continue to seek the safety and solace of the outdoors, waterfalls are, as Johnny Cheng, who writes about waterfalls on his website World of Waterfalls, puts it “metaphors for how life carries on and nature goes about doing its thing.”

The following is a selective springtime guide to waterfalls around the United States.

Roughly six million acres of the Adirondack Mountains offer waterfall-watching from the well-known Rainbow Falls at Ausable Chasm, a tourist site since 1870, to the more secluded Gleasmans Falls near Lowville.

OK Slip Falls near Indian Lake lies between them on the spectrum, impressively high at around 250 feet — one of the tallest in the Adirondacks — reached via a roughly three-mile trail through rolling woodlands that ends at a pair of overlooks (a short, very steep trail leads to the river below).

“What’s nice about OK Slip Falls is you travel a distance to get there, building anticipation,” said Stacy Pagoda, owner of Another Paradise Cove, a canoe and kayak rental shop in Long Lake, who offers regional sightseeing advice to visitors. “This year, we had a big snowmelt with quite a bit of rain so the water everywhere is moving pretty good right now.”

Hamilton County, home to OK Slip Falls, has a waterfall challenge identifying 19 waterfalls in the area reached via hikes that range from five minutes to several hours, each assigned a point value ranging from one (easy) to four (difficult, which is OK Slip’s rating). Hikers who score 12 or more points may receive a souvenir patch.

More than 10 waterfalls seasonally gush with high-country snowmelt and spring rain in and around Crawford Notch State Park in New Hampshire’s White Mountains. The highest in the state, Arethusa Falls, drops over a nearly 200-foot cliff face.

Two of the park’s falls, the ribbonlike Silver Cascade and Flume Cascade, can be viewed from roadside stops. Others require a hike on trails that may be muddy or snowy this time of year.

“You can do a lot of hiking if you want to,” said Clare Arentzen, a senior outdoor guide with the Appalachian Mountain Club in New Hampshire, noting that the moderate three-mile, round-trip trail to Arethusa Falls can be looped to the Bemis Brook Trail to reach the tiered Bemis Brook Falls for “more bang for your buck.”

Throughout the White Mountain region, Chris Whiton, a nature photographer who regularly shoots waterfalls, estimates there are more than 100 named falls in shapes from flumes to drops to steps. He uses 19th-century guides published by railroads and hotels to find often unnamed waterfalls that have fallen off the map.

“Waterfalls are fun because they have such personality and each is a little different,” he said.

Many of the cascades and falls in Maine are ephemeral and dependent on snowy winters, according to Greg Westrich, the author of “Hiking Waterfalls Maine,” which identifies about 100 falls over 67 hikes. Because this year was relatively dry, he urges waterfall watchers to act soon.

“In Acadia National Park, there are half a dozen falls that will be dry by mid-June or just a trickle unless there’s a heavy rainstorm,” he said.

At nearly 100 feet, Moxie Falls, in the central Kennebec Valley, where the Dead and Kennebec rivers meet in a region known as The Forks, is among Maine’s highest falls, with the added attraction of easy accessibility. A .6-mile well-maintained trail reaches the water, a popular swimming hole in summer.

One of Maine’s best known waterfall hikes, Gulf Hagas, near Brownville in central Maine, has often been called the “Grand Canyon of Maine” for its series of slate gorges, rock walls and falling and rippling water along four miles of the West Branch of the Pleasant River in the Appalachian Trail corridor. From the same trailhead, ditch the crowds by hiking just over a mile to Hay Brook Falls, “prettier than Gulf Hagas and easy to get to,” Mr. Westrich said.

“High Falls is the biggest of the plunges, the last big one the river takes before it lazily makes its way to Lake Superior, not quite two miles to the lake,” said Travis Novitsky, the park manager.

“It’s pretty common to get a rainbow when the water is high,” he added, noting the angle of the viewing platform to the falls, an effect also visible by moonlight.

In addition to seeing Minnesota’s highest falls, accessible by a paved trail, explorers can take a challenging 4.5-mile round-trip hike over rugged, rocky hills, crossing a ridge with panoramas of the river and Lake Superior, to reach more remote Middle Falls.

Grand Portage is on the north end of the 145-mile drive from Duluth along Lake Superior, stringing together eight state parks, most with their own waterfalls, including Tettegouche State Park, home to another High Falls, the second tallest in the state.

Dropping an impressive 2,425 feet, Yosemite Falls in Yosemite National Park is the icon of the Eastern Sierra Nevada range, peaking in May and June and dwindling to a trickle or drying out by August. But there are many more in the region where waterfall chasing is a spring pursuit.

“There are a lot of hiking trails in canyons outside of Yosemite where waterfalls are delights to discover,” said Allan Pietrasanta, a backcountry sportsman and a board member of the Eastern Sierra Avalanche Center, who cautioned that the snowpack is about 60 percent of normal this year, which will eventually slow the flows.

Still, many of the high-elevation areas remain closed until snowplows dig out the roads in spring. When that happens, Devils Postpile National Monument near Mammoth Lakes will open, usually by mid-June, offering opportunities to see the namesake basalt columns as well as 101-foot-tall Rainbow Falls, the highest waterfall on the Middle Fork of the San Joaquin River, and named for the rainbows that tend to form in the mist. It is reached via a roughly three-mile, round-trip hike.

Nearby falls include Twin Falls, tumbling out of Lake Mamie, and 270-foot Horsetail Falls on the 16-mile June Lake Loop road.

Many waterfalls are regulated by dams or siphoned for irrigation. But Mesa Falls on the Snake River in the Caribou-Targhee National Forest in eastern Idaho, about 50 miles southwest of Yellowstone National Park, flows freely, the last of the uncontrolled falls in the state.

When snowmelt swells the Snake River, May through June, it rushes in a white water curtain over the 10-story, roughly 200-feet-wide Upper Mesa Falls. A mile downstream via the Mesa Falls Scenic Byway, the water then tumbles through a smaller chasm known as Lower Mesa Falls.

“In spring, the falls are thundering,” said Susan McKenna, who manages the falls site.

Though located at 6,500 feet elevation, Mesa has the advantage of being accessible, especially for families, many of whom are on their way to Yellowstone when they stop by the falls. The round-trip hike to the viewing platforms is around half a mile and a walk on a nature trail will add two more miles.

The byway has been plowed, but the road may be icy and the visitor’s center will not open until around Memorial Day.

“People have been calling already to find out if we’re open,” Ms. McKenna said. “We’re not Old Faithful, but we’re getting there.”

There are at least 150 waterfalls in Mount Rainier National Park, about 85 miles south of Seattle. But the unofficial count is much higher.

“There are times of year that if you counted every place where water is running and dropping, you probably have thousands in the park,” said Kevin Bacher, the park’s volunteer program manager. “There’s a good reason we’re in a region called the Cascades.”

It might take until July for the snow, which averages 53 feet annually in the 5,400-foot Paradise area, to melt. Snowmelt and water from 25 glaciers on the 14,410-foot namesake peak produce a prolonged torrent that starts in April and works its way to higher ground in summer.

“The park is best known for its mountains and grand scenic vistas, so a lot of times people miss the forest trails where you see the waterfalls,” Mr. Bacher said.

For a mix of seasonal and year-round falls, he recommended the lower-elevation Eastside Trail, introducing “a waterfall every quarter mile or so” along the roughly 13-mile, one-way trail. The trail, which has several access points for shorter treks, follows the Chinook Creek and Ohanapecosh River through dense forests past a series of falls including two-tiered plunge Ohanapecosh Falls and “a bunch that aren’t named.”

From a roadside lot, visitors can easily visit Narada Falls, where the icy waters of the Paradise River sail nearly 180 feet over ancient andesite volcanic rock.