They Live in the U.S., but They’re Not Allowed to Come Home 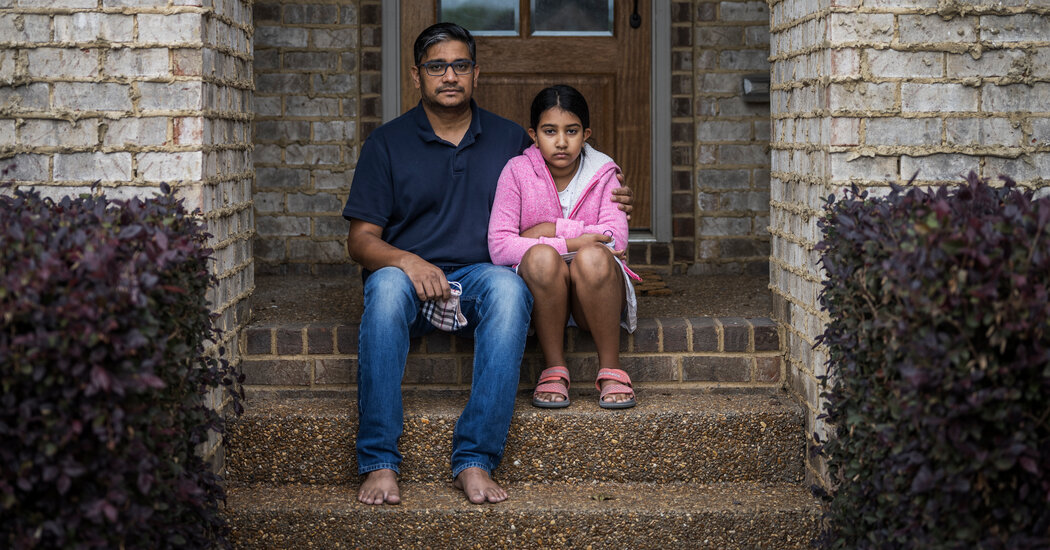 In early April, Payal Raj accompanied her family to India to renew the visas that permit them to live in the United States. She and her husband waited until they had been vaccinated, carefully preparing their paperwork according to the advice of their immigration lawyers. But the visa itself would soon strand her in India indefinitely, separating her from her husband and daughter in Hendersonville, Tenn.

“Our family is in a crisis,” said Ms. Raj, who is one of thousands of immigrants stuck in India, in part because the Biden administration’s restrictions on most travel from the country mean that temporary visa holders are explicitly barred from re-entering the United States. “Every morning is a struggle.”

The restrictions, issued as a devastating surge in coronavirus cases has overwhelmed India in recent weeks, prohibit Ms. Raj and others like her from returning to their homes, families and jobs in the United States. Even those exempt under the ban are in limbo as the outbreak forces the U.S. Embassy and consulates to close, leaving many with no clear path home.

Ms. Raj’s husband, Yogesh Kumar, an operations manager for a multinational corporation, lives in the United States on an H-1B visa, or a temporary permit for highly technical foreign workers. As dependents, Ms. Raj and their daughter hold H-4 visas, which allow temporary workers to bring immediate family and must be renewed about every three years at an embassy or consulate outside the United States.

Mr. Kumar and his daughter, Saanvi Kumar, renewed their visas, but Ms. Raj was asked to submit biometrics and complete an in-person interview, both of which would not be completed until after the travel restrictions went into effect two weeks ago.

As the primary breadwinner, Mr. Kumar said his employer would not allow him to work from India indefinitely given that some aspects of his job required in-person interaction. He returned to Tennessee with Saanvi, leaving Ms. Raj behind in Bangalore.

“If he quits his job, we won’t have any means to sustain ourselves,” Ms. Raj said of her husband, whose income also supports both their parents. “But in the middle of all of this, I’m sitting here, away from my family, for I don’t know — months? Years?”

The White House did not respond to questions about the restrictions on travel from India, but a State Department representative described them as “appropriate public health measures” that are “critical” to defeating the coronavirus.

“The pandemic is a global issue, and it will not be over for anyone until it’s over for everyone,” the representative said in a statement.

But critics say that the exemptions to the travel ban are unevenly applied and still risk spreading the virus. American citizens and permanent residents, for instance, can travel freely, while people who are fully vaccinated, test negative or quarantine before and after flying cannot. The administration has not indicated when or under what circumstances it would lift the restrictions.

“They just put the same blanket ban for India that they were using in the Trump administration,” said Greg Siskind, an immigration lawyer who is suing the Biden administration over the State Department’s inability to issue visas in countries experiencing lockdowns. “This was the same style ban that President Biden said last March was ineffective and was a bad idea.”

The United States has restricted entry from a number of countries, but the most recent ban has had a disproportionate effect on Indians in the United States given that Indian citizens claim more than two-thirds of H-1B visas issued each year. Including those on other kinds of nonimmigrant visas, immigration lawyers estimate that thousands of Indians living in the United States have been affected.

Some traveled to India when coronavirus case counts were low to renew their visas or see family. Others went to care for sick or dying relatives. Now some are unable to secure even emergency appointments to renew their visas at the embassy in New Delhi or any of the four U.S. consulates in India.

In late April, Gaurav Chauhan traveled to Agra to care for his father, who was hospitalized with the coronavirus. He is now separated from his wife and two children, who live in Atlanta.

As a parent of American citizens who are minors, Mr. Chauhan is exempt from the ban, but he has been unable to make an emergency appointment on the State Department’s website to renew his visa. His employer, a software company, has temporarily allowed Mr. Chauhan, who works in human resources, to do his job overseas. But others in similar situations say they have been asked to leave their jobs.

“If you are certain that in two months or three months things are going to be normal, we are going to get a visa issued, you have at least a timeline of when you are going to see your family,” Mr. Chauhan said. “But the uncertainty — that’s the thing that is killing us.”

Since the beginning of the pandemic, American embassy and consulate closings have bottlenecked visa processing. In early April, 76 percent of consulates were still fully or partly closed, according to an analysis of State Department data by the Cato Institute, a libertarian think tank.

Such shutdowns should not stop visa processing, Mr. Siskind said, pointing to other immigration agencies that had successfully adapted to remote work and exceptions to in-person document submission.

“One of the issues with the State Department for the last 14 months is their lack of imagination in terms of how to change their procedures in a pandemic,” Mr. Siskind said. “They have, for example, not switched to video interviewing, which is something that they have the statutory authority to do.”

The State Department acknowledged that “services are limited” at U.S. outposts in India but said that it would “make every attempt to continue to honor approved emergency visa appointments.” The department could not provide a specific date for when other visa services would resume.

Abhiram, a professor in Broward County, Fla., whose wife and 3-year-old daughter remain outside Hyderabad after visiting family in January, said he did not fault the government for enforcing travel restrictions to prevent the spread of the coronavirus. But the situation has made him consider whether to stay in the United States.

“Every day my daughter asks me, ‘Daddy, where are you?’” said Abhiram, who asked to be identified only by his middle name. “I do feel sometimes like going back to my home country, rather than dealing with this.”

But for Ms. Raj and her family, home is Hendersonville.

“Our whole day-to-day life was interacting with our neighbors, going and visiting friends, getting together for backyard parties. It’s been wonderful,” she said. “I don’t want to uproot our lives.”