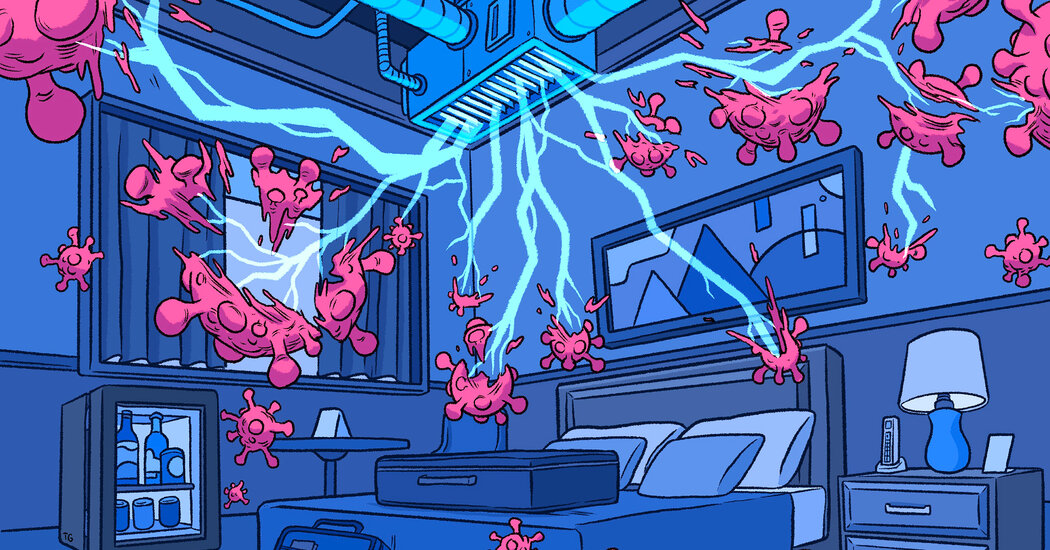 “In a transient environment, like a hotel, motel or dormitory, you don’t know who was there before you and what their health was,” said Wes Davis, the director of technical services with the Air Conditioning Contractors of America, a trade association, adding that good housekeeping is a top priority in such places. “As for the other items like ultraviolet exposure or ionization, every little bit helps, but I’m not quite sure any of them is the perfect solution. It’s more like a concert.”

From property-wide to portable

Throughout the summer, the Madison Beach Hotel, part of Hilton’s Curio Collection of hotels, in Madison, Conn., used its outdoor spaces for dining and even holding meetings in tents. But with the approach of cold weather, HVAC contractors installed an air purification system that uses UV light and ionized hydrogen peroxide in most public areas of the hotel, including the indoor restaurant and meeting rooms. Spa treatment rooms each have their own portable air purification systems.

“We wanted to create an environment that was as safe as possible,” said John Mathers, the hotel’s general manager, adding that each guest room has its own closed HVAC system that doesn’t mingle with others and thus doesn’t require extra purifying. “The air being recirculated in your room is your air.”

But many hotels are bringing units into the guest rooms for extra assurance. In Rhode Island, rooms at the Weekapaug Inn and Ocean House hotel, both run by Ocean House Management, have Molekule air purifiers that destroy pollutants and viruses at a rate above 99 percent, according to the independent testing group Aerosol Research and Engineering Laboratories.

Larger units were recently added to restaurants and public spaces, and the portable units have become a top seller, starting at around $500, in Ocean House’s gift shop.

Decisions about installing air purification systems tend to happen at the property or ownership level, rather than the brand level. But Hilton has AtmosAir’s bipolar ionization air purification systems in its Five Feet to Fitness rooms, more than 100 guest rooms across 35 hotels that double as mini gyms with weights, indoor cycles and meditation chairs.

Many hotels have long offered allergy-free or wellness rooms to travelers that feature heightened purification systems. Pure Wellness has its Pure Room technology that claims to eliminate viruses, bacteria and fungi, including air filters effective enough to trap the coronavirus, in over 10,000 rooms worldwide.