The Magic of Birdwatching in Ontario’s Algonquin Provincial Park 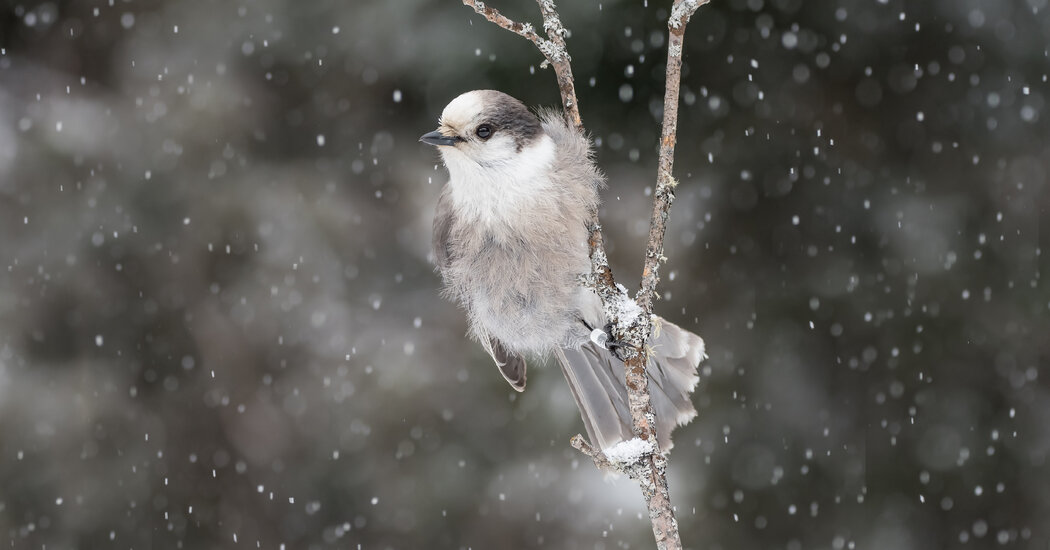 Something had drawn a crowd of bundled-up onlookers to a snowy spot just off the main road that runs through Ontario’s Algonquin Provincial Park.

Clad in ski hats, wool scarves and mittens — and bulky necklaces of cameras with hefty telephoto lenses — the line of about a dozen people seemed to be waiting. I squeezed our family’s minivan into the last open parking spot to join them. We all might well have been the anxious audience for Punxsutawney Phil, waiting with bated breath in anticipation of whether the famous Pennsylvania groundhog would see its shadow. Except we were 200 miles north of the U.S. border in the boreal forest of Ontario. And the crowd was staring upward, intently, into the boughs of balsam firs at the edge of the parking lot.

A few soft whistles wafted from behind those trees, a few smiles rippled through the crowd, and then a pair of Canada jays — fluffy medium-sized birds that themselves seemed bundled up in charcoal gray jackets — floated down to a snowbank just a few feet away. The onlookers gushed with joy. The jays were showered with offerings of bird seed and bread, as if they were deities.

My family of four immediately jumped into the act. After rooting around in the back of the minivan, my two teenagers were soon tossing bits of bread and trail mix to a squad of black-capped chickadees that had joined in the feast — and I marveled at the change that had come over my sons. Just a few hours earlier, after crossing the border from New York into Canada and losing cellphone service in the north woods, they had been surly teens, fighting over whose leg had trespassed into whose territory in a minivan back-seat turf war.

“It’s just so cool. This bird is actually coming to see me,” said Henrik, the 13-year-old, as he tore up bread for the jays.

Even the older, more cynical teen, Anders, was converted: “Can I have more trail mix? This chickadee didn’t get any yet.”

Algonquin in winter is a place where such transformations happen: Here, birds break the fourth wall between us and the wild. And, just as my wife and I had hoped, a weekend away with birds can pierce the sullen exteriors of adolescents hardened by life in school.

We made the trip in January 2020, right before the pandemic shut down North America. But now the U.S.–Canada border has reopened, and Algonquin Provincial Park again offers a snowy winter wonderland that feels remote — but is actually very accessible, with a well-maintained thoroughfare (Ontario Highway 60) running from the park’s east gate to west gate. We made the drive to Algonquin along highways and good two-lane roads in a little over three hours from the border, crossing north of Fort Drum in New York. From Toronto it’s about a three-hour drive east over good roads.

And the drive was worth it, to see curiosity rekindled in a teenager.

“It’s just so cool to feel it land on your hand,” said Henrik, as a Canada jay picked bread crumbs from his palm. It had been years since one of my sons thought a bird was cool. Somewhere after elementary school, dad’s birding habit became decidedly nerdy. But now that innocent smile was back.

“Oh, please don’t feed them white bread,” said a voice behind us. I turned to see a woman with an Algonquin Provincial Park patch on her ski hat walking toward us, offering handfuls of peanuts in the shell, sunflower seeds and dried fruit.

It was Emily Fikkert, the organizer of a day trip of bird photographers from Toronto who shares photos on Instagram. She started coming up to Algonquin several years ago, initially hooked on shooting photos of moose. Then, she said, she met a man feeding Canada jays with “a handful of cranberries, bread and cheese,” and a new wildlife obsession was born.

Ms. Fikkert gave me extra handfuls of seeds and nuts for later. She said that she often offers a free upgrade on bird food to people she meets in the park. “I feel that if many are going to feed the birds, it should be of nutritional value to the birds.”

Ms. Fikkert says she would never feed any other wildlife, but she makes an exception for the birds in Algonquin, which are already “socialized.”

“A tiny creature showing trust,” she said. “I love it because as a birder, it allows me to feel the weight, feel their tiny feet and see all the incredibly beautiful details up close.”

Soon more carloads pulled up and parked along the road’s shoulder. Ms. Fikkert set out a birch log sprinkled with sunflower seeds in a sunny spot where everyone could get a good look. A feeding frenzy of jays, chickadees and red-breasted nuthatches ensued, and the new arrivals of onlookers hustled over with arm-length camera lenses slung over their shoulders.

We decided to ditch the crowd, walking up a snowy trail away from the parking lot. Within a few hundred yards, two curious Canada jays approached us — perching on tree branches hanging over the trail and cocking their heads inquisitively. My wife, Amy, dug into her jacket pockets for handfuls of the seeds Ms. Fikkert had given to us, and then extended both arms — the jays swept down, one landing in each hand.

“OK, I feel like the bird whisperer now,” Amy laughed.

“It’s cool because you learn that birds have personalities,” said Henrik, as another jay dawdled on his wrist, sorting through the trail mix in his palm. “One will come up and chill in your hand for awhile. Some are really picky and pick over the different pieces of food in your hand to get what they want.”

How did Canada jays get so friendly?

Scientists have been studying what happens to the Canada jays that have become bold enough to approach people for food, as part of a decades-long study on the jay population in Algonquin Provincial Park. Research by scientists at the University of Guelph showed that the Canada jay pairs in the park that regularly visited park tourists for food handouts were more successful at reproduction, tending to have bigger, healthier broods of offspring than the birds that eschewed people.

But any benefit of food supplementation isn’t enough to counter the long-term declining trend of Canada jays throughout the park, said Ryan Norris — the University of Guelph professor who currently leads the jay population study. Since 1977, the number of Canada jays surveyed throughout Algonquin has declined by more than 70 percent. Climate change is thought to be a cause, namely unseasonably warm temperatures that spoil the birds’ food supplies. (After taking seed and bread from our hands, the jays often retreated back into the woods, where they cache food for later consumption.)

As the Toronto Instagram group trundled up the trail to join us and our birds, we decided to take a break and head over to the visitor center. In the main lobby there was an interpretive display with a photo on the wall of a smiling young woman holding a Canada jay in her hand. In the cafeteria we warmed up with hot chocolate and coffee, chicken soup and flimsy cheeseburgers — food that tastes good after spending hours in the cold. Amy and I strolled over to the window to look at the bird feeders and saw a flock of striking black-and-yellow evening grosbeaks (like oversize goldfinches). The boys found the WiFi access and resumed texting with friends back home.

After lunch, I wandered over to chat with the interpreter at the park’s information desk. The birds along the road at Algonquin are “habituated,” she said, to people feeding them. Another couple overheard our conversation and started telling the interpreter about the Canada jays eating out of their hands at the Spruce Bog Boardwalk parking lot.

Soon we headed back into birdland. In a stand of black spruce trees we were swarmed by chickadees; their wing flutters tickled my ears as they buzzed by my head. An outstretched hand with sunflower seeds drew five or six chickadees at a time.

A ways off from the road, the birds were shy. A few hopped along the ground to take morsels near our feet. One Canada jay took a peanut and, with a couple of wing beats, was soon on a branch just inches from my head; I could see my own reflection in the bird’s black marble eyes.

For a while on the drive back south to New York the boys were rehashing their observations and hypotheses on the different personalities among birds. Then we re-entered the realm of cellular service, and they were teens on TikTok again.

But a week later, I looked on Anders’s Instagram feed and saw that he had shared a few photos of his favorite Canada jays — something that would have been decidedly uncool before our visit to Algonquin.