Thanksgiving in a Town Built on Lederhosen and Limitless Meals 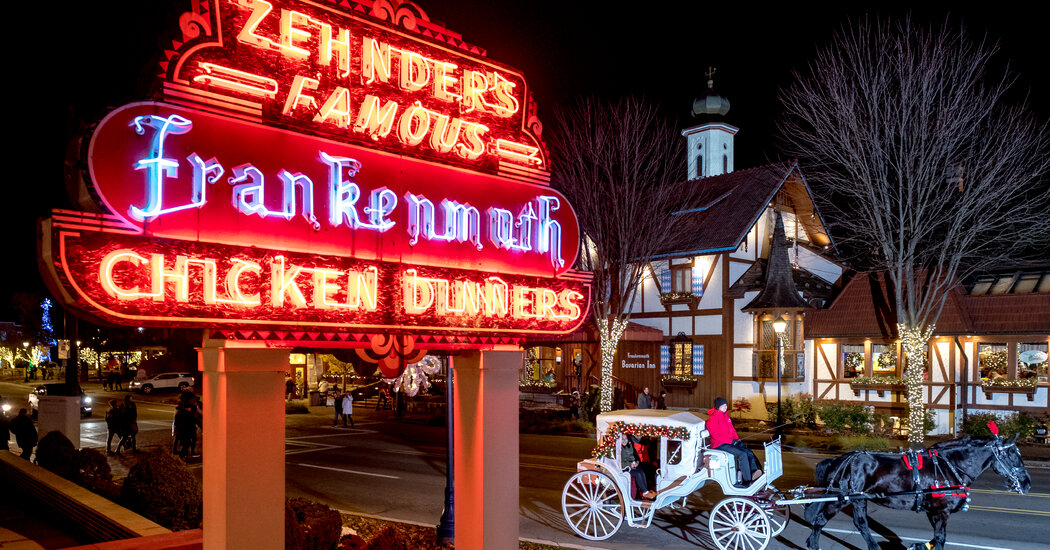 For more than a century, this city in Central Michigan has made its reputation on family-style chicken dinners, served much the same way they were in 1937, when this newspaper proclaimed Frankenmuth “a mecca for gourmets.”

Chickens are boiled whole, left to chill, then cut into 10 parts that are breaded and lightly fried till the meat is hot and juicy. But roast turkey joins the chicken dinner for the holidays, and this Thursday is expected to be the busiest day of the year for the two “Frankenmuth dinner” restaurants that face each other across South Main Street: Bavarian Inn and Zehnder’s of Frankenmuth. Nearly 30,000 diners are expected during the four-day holiday weekend.

“It’s the food,” said Dorothy Zehnder, a founder of the Bavarian Inn, who will turn 100 on Dec. 1. “They know they get good food, and Thanksgiving and Christmas are really family affairs, family days.”

They also get nostalgia by the acre, served up with the gusto of Lawrence Welk at Champagne-bubble time. Like those who travel to Solvang, Calif., or Leavenworth, Wash., visitors to Frankenmuth experience a simulacrum of another place — or in this case, many places, from old Bavaria to colonial America to the North Pole — filled with polka music, wine tastings, water slides and reminders that the rock band Greta Van Fleet started here.

Frankenmuth’s German heritage is woven through the city, in the Bavarian Inn’s 50-foot Glockenspiel tower, in the hotel rooms named for founding families and in the Fraktur lettering everywhere. The front of the post office sports larger-than-life cutouts of Hummel figurines mailing porcelain letters straight, one imagines, to a visitor’s heart.

This year, hopes are high. Michigan’s restaurants reopened to full capacity just this summer, and this month the border opened to Canadian visitors, who before the pandemic made up a sizable portion of the out-of-town guests. The spacious dining rooms, which can seat 1,200 or more, were dark last Thanksgiving. Takeout was the only option, with only a small fraction of the staff running the show; the number of employees at the Bavarian Inn is still below prepandemic levels, while Zehnder’s has just about returned to normal.

“Takeout, for us, is like telling a car dealer, ‘You can’t sell cars but you can do oil changes,’” said Al Zehnder, the chief executive of Zehnder’s of Frankenmuth.

Mention Frankenmuth to a Michigander and she’ll be quick to note whether she comes from a family of Zehnder’s loyalists or Bavarian Inn fans. The two restaurants have clear stylistic differences, starting with the facades. Zehnder’s looks like Mount Vernon, if George Washington advertised with neon. The Bavarian Inn has a “hills are alive” feel.

Servers at the Bavarian Inn wear dirndls or lederhosen. Those at Zehnder’s dress in the restaurant’s colonial theme, with women in mobcaps and white aprons, and men in banded-collared shirts with knickers.

The meal at Zehnder’s starts with garlic toasts and orbs of spreadable cheese and pâté, while at the Bavarian Inn, the opening attraction might be an accordion serenade by Linda Lee, an honoree of the Polka Hall of Fame. “They have more American food, and we have more German food,” said Mrs. Zehnder, of the Bavarian Inn.

But the all-you-can-eat menus are largely the same. Both restaurants offer chicken noodle soup and stollen slices the size of sandwich bread, conservatively studded with candied fruits. And both end their bottomless meals with soft-serve ice cream. At Zehnder’s, the dessert is topped with a translucent plastic animal the restaurant calls a Zoo Pick. At the Bavarian Inn, it’s a pick of a boy or girl dressed in Alpine clothing.

Mr. Zehnder once thought of saving a few bucks by getting rid of the Zoo Picks. Customers howled. “We had to get them back,” he said, adding, “The expectation of the guests is really singular.”

And there’s more. Beneath each restaurant is an underground warren of shops selling toys, collectibles, cookware and Frankenmuth favorites like fresh butterhorns, sweet rolls that will survive a long car ride home. The idea is to keep guests entertained while they wait for a table.

“We live in an ‘Ozzie and Harriet’ kind of a town,” said Wayne Bronner, the chief executive of Bronner’s Christmas Wonderland. “I explain that to people, and the younger people, they say, ‘Who are Ozzie and Harriet?’”

How this predominantly German American city in the Saginaw Valley, near the base of the Michigan “thumb,” became a destination for satiation is a saga worthy of a James Michener novel, complete with religious fervor, tinsel, beer and a family dynasty that is synonymous with the chicken dinner.

With the city’s focus on German heritage, though, it’s easy to miss the other group at the beginning of the story.

This stretch of farmland was once oak, hickory and white-pine forest, the hunting grounds of the Chippewa. The Treaty of Saginaw, an 1819 agreement with the United States government, stripped the Saginaw, Swan Creek and Black River Bands of six million acres in Michigan, though subsequent treaties put some land in a trust, the sales of which were supposed to benefit Native Americans.

Frankenmuth was founded by 15 Lutherans, led by August Craemer, who immigrated with the stated purpose of converting Native Americans to Christianity. In 1845, the group bought 680 acres of former Native American land from the government for $1,700, or about $62,000 today.

The first Zehnders, including Johann Stephan Zehnder, arrived in Frankenmuth the following year with a second group of German Lutherans. Those first few years, Craemer ran a missionary school in Frankenmuth, and taught religious doctrine in German to a few dozen Chippewa children.

Today, fewer than 20 of Frankenmuth’s roughly 5,000 residents identify as Native American, according the 2020 census. A marker in the city’s Memorial Park notes Frankenmuth’s connection to the Chippewa; the Saginaw Chippewa Indian Tribe of Michigan has a reservation 70 miles to the west, in Mount Pleasant.

“The Saginaw Chippewa Indian Tribe celebrates all others who take the time to remember where they came from and maintain those connections to old traditions and celebrations,” Frank Cloutier, the public relations director for the tribe, wrote in an email. “As we near the Thanksgiving holiday we are mindful of the fall harvest celebration of the late 1600s when the pilgrims from Europe were invited to break bread with the aboriginal natives. As they shared their culture then, we still do today.”

Frankenmuth’s culture of hospitality, or Gemütlichkeit, dates to the late 19th century, when a brewery and hotels nourished travelers journeying between Saginaw and Flint. In 1928, William Zehnder Sr., Johann’s grandson, bought a hotel on Main Street opposite Fischer’s Hotel, where most travelers at the time stopped for a chicken dinner.

An admirer of George Washington, William Zehnder remodeled his hotel to look like Mount Vernon, and it opened as the family’s first restaurant on Mother’s Day in 1929. “What a terrible time to start a business,” Al Zehnder said, “during Prohibition and just on the doorstep of the Depression.”

Visitors continued to stop in Frankenmuth, though, because the beer continued to flow. “‘A kettle of tea’ was the code word,” said Heidi Chapman, director of the Frankenmuth Historical Association. The government levied heavy fines against the Zehnders and the Fischers, and federal agents destroyed both bars.

After World War II, Wally Bronner, a sign painter who had won renown for his work decorating businesses around the region in Christmas splendor, added the tinselly twinkle to Frankenmuth’s tourist industry by opening his first Christmas store.

“Red shiny ornaments are our No. 1 seller,” said Wayne Bronner, his son. Bronner’s Christmas Wonderland employees 75 people, a tenth of its usual staff, just to paint customers’ names on ornaments. The 320,000-square-foot store — about 100,000 of it shopping space — is the size of five football fields and sells everything from velvet Santa suits to job-specific baubles. (“Lawyers never lose their appeal!” “Plumbers go with the flow.”)

The Zehnder family bought the restaurant Fischer’s Hotel in 1950. Mrs. Zehnder and her husband, William Zehnder Jr. (a.k.a. Tiny — he was a small baby), built an addition, in 1959, designed by an architect who agreed to work on the project only if he could do it in a German style.

“The day we opened up, business boomed,” Mrs. Zehnder said. “It really flourished, and then, of course, we went German. We had to.”

Tiny Zehnder persuaded town elders to weave the Old World motif throughout the city. There’s faux fachwerk (half-timbering) and the blue-and-white diamond pattern of Octoberfest all along Main Street.

The Zehnder family ran both restaurants until the 1980s, when the second generation split the enterprise into two entities to pursue differing business interests. Dorothy Zehnder’s family runs the Bavarian Inn and a shopping center; Al Zehnder, his sisters Martha and Susan and their families operate Zehnder’s restaurant and a golf course. Each has a bakery and a hotel with a water park.

In 2020, the James Beard Foundation honored Zehnder’s as one of its America’s Classics, beloved regional restaurants that are often run by families.

“Our whole focus has really been to create a four-season family vacation destination,” Mr. Zehnder said. “The focus on family really hasn’t changed since the founding.”

One family, the Murins of Irwin, Pa., has been planning its Thanksgiving trip to Frankenmuth since the summer. Emily Murin and her husband, Jonathan, love the Christmas season (“It is the one thing that bonds us together,” she said) and wanted to take their daughters, Gianna, 5, and Gabriella, 4, on a holiday trip in their new camper trailer.

They chose Frankenmuth over Dollywood, in Tennessee, because the drive to Michigan would be on flatter terrain. They plan to arrive on Wednesday, eat Thanksgiving dinner on Thursday, shop at Bronner’s on Friday and maybe fit in a trip to Splash Village on Saturday before heading home, where four decorated Christmas trees await their return.

“I posted on the local groups to say, ‘OK, well, which one is it going to be: Zehnder’s or Bavarian Inn? Who is the winner?’ And it was actually a very, very dead heat,” she said. “So it came down to reservation time.”

When the Murins sit down to Thanksgiving dinner at the Bavarian Inn, they’ll find a style of dining that hasn’t changed all that much since Mrs. Zehnder began her career as a waitress in 1937.

Even so, not all diners are bound by tradition. “You’d be surprised,” Mrs. Zehnder said, “by how many steaks we serve on Thanksgiving.”