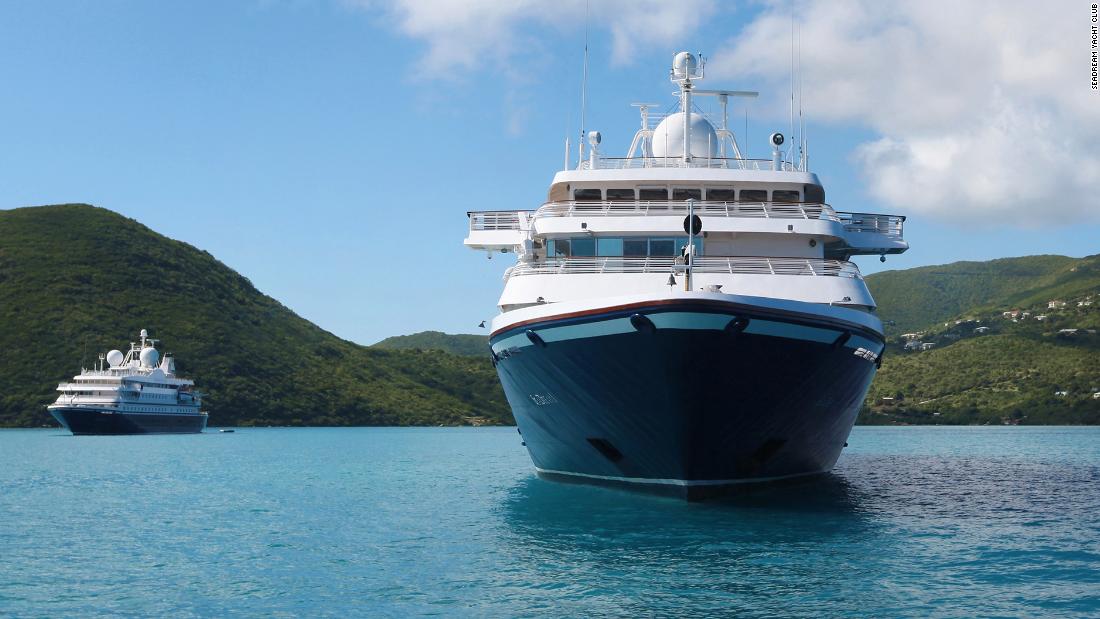 (CNN) — A total of seven passengers have tested positive for Covid-19 aboard the SeaDream 1 cruise ship docked in Barbados, according to a passenger on the ship.

Forty six passengers who have tested negative for coronavirus began to disembark the SeaDream 1 cruise ship to fly home Saturday, according to passenger Ben Hewitt.

Five passengers who tested positive also disembarked for a private flight back to the United States, according to Hewitt.

Hewitt, host of Cruise with Ben & David on YouTube, was among a handful of cruise journalists and bloggers on board the SeaDream Yacht Club cruise — the first to return to the Caribbean since the coronavirus pandemic shut operations down in March.

The voyage was meant to demonstrate that increased safety protocols, including regular testing aboard the ship, could allow cruise voyages to take place during the pandemic.

Instead one passenger fell ill on Wednesday, forcing the SeaDream 1 to return to Barbados, where all 53 passengers and 66 crew were tested.

SeaDream Yacht Club said in a news release Thursday afternoon that “guests” had received “assumptive positive” results to preliminary rapid Covid tests, but did not specify the number who had done so.

“We are working closely with local health and government authorities to resolve this situation in the best possible way,” said SeaDream’s Andreas Brynestad, in the SeaDream release.

CNN has asked SeaDream to confirm the exact number of positive results and to provide additional details. The company and the government of Barbados did not respond to requests for comment.

Passenger Gene Sloan took this photo during the cruise that’s been cut short by a Covid-19 outbreak.

Gene Sloan, a senior reporter for cruise and travel at The Points Guy, reported that the Covid scare started when the captain informed passengers of the preliminary positive test over the ship’s intercom system shortly before lunchtime on Wednesday.

Passengers were instructed to return to their cabins and remain isolated there, he said.

The ship, which was in the Grenadines at the time of the first preliminary positive test, docked in Barbados Wednesday evening.

“It’s not a great development for the cruise industry,” Sloan told CNN via email on Wednesday from his cabin on board. “I think the hope had been that the rigorous testing that SeaDream was doing would keep Covid off its ship.”

Passengers were tested in advance of traveling to the ship and also before boarding the ship, Sloan said.

“And SeaDream also was testing passengers four days into the trip,” he said. “We were scheduled to be tested again today. That’s a more rigorous testing plan than most lines had been discussing for the restarts.”

The protocol is due in part to the strict testing required by Barbados, where the ship will be based for the season, Sloan noted.

“I think what this shows is it’s going to happen. And until there’s a vaccine or herd immunity, when cruising starts up you’re going to see things like this happen. The question is how often and how big?”

The current sailing was carrying 53 passengers and 66 crew, Sloan said.

SeaDream’s winter voyages from Barbados started on November 7 with the sailing that has now been cut short.

These new Caribbean sailings follow a successful summer season for SeaDream in Norway, which the company said “resulted in zero positive cases during the entire Norwegian summer season.”

“After completing a successful summer season in Norway, we implemented even stricter health and safety protocols for our Barbados winter season. All guests were tested twice prior to embarkation and we are in the process of retesting guests,” said SeaDream’s Andreas Brynestad in the statement released on Thursday.

Hewitt, the YouTube host, expressed his disappointment and frustration with the virus in an interview Thursday from his stateroom.

“It’s just so disappointing that this has happened because everybody has their hopes up high, and we can’t see anything more that they could’ve done,” said Hewitt.

“It’s just such a horrible virus, it just gets everywhere even with the constant testing.”

The use of masks on the voyage has been far less stringent.

Sloan told CNN that initially no one was wearing face masks, not even the crew. Crew members told him they weren’t necessary since the ship was a Covid-free “bubble.”

Then a few days into sailing, SeaDream instituted a mask policy but didn’t offer an explanation, he said.

SeaDream’s ships, which the company refers to as “superyachts,” have 56 staterooms, with a capacity for 112 guests and 95 crew.

Carrying fewer than 250 guests outside of US waters allows SeaDream to operate outside of the US Centers for Disease Control and Prevention’s orders around cruising.

The CDC recently issued a “Framework for Conditional Sailing Order for Cruise Ships.”

The order, which applies to cruise ships in US territorial waters that have capacity to carry at least 250 passengers, is considered a tentative step toward the resumption of cruising.

Safety measures may not be enough to contain the virus.

On Friday, a letter signed by Sen. Richard Blumenthal (D-CT) and Rep. Doris Matsui (D-CA) called on the CDC to reinstate its no-sail order for cruise ships and reverse efforts to restart the industry’s US operations.

The letter cites the outbreak aboard SeaDream 1.

Despite precautions, “the virus was still able to infect multiple people on the ship, with the possibility of more confirmed cases emerging as passengers and crew are retested,” the letter reads.

“Unfortunately, this troubling development is not surprising and reaffirms the need to exercise extreme caution before sending passengers and crew back out to sea on cruises.”