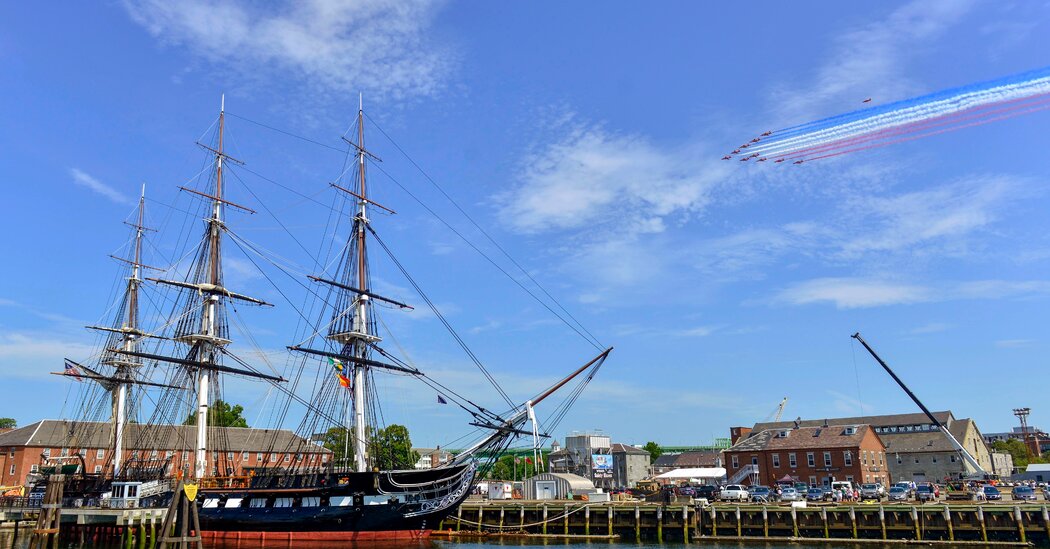 The white-and-buff protected cruiser Olympia, found at the Independence Seaport Museum in Philadelphia, was Commodore George Dewey’s flagship at the Battle of Manila Bay in the Spanish-American War. In that 1898 engagement, the commodore (later Admiral of the Navy) led his column of ships into the bay and destroyed the Spanish fleet in the Pacific. The implications of Dewey’s victory were immense, and are still felt today: the Philippines was annexed and the United States became a permanent power in the western Pacific. The fast, heavily armed Olympia is the only surviving ship from the conflict. On weekends there are guided tours of the engine room, which featured a number of innovations for its time. But Olympia also carried technological anachronisms, like a ram bow, should a captain wish to impale his opponent’s ship. Admission for adults is $18, children and seniors $14 and includes access to the museum.

Travel Trends That Will Define 2022

Looking ahead. As governments across the world loosen coronavirus restrictions, the travel industry hopes this will be the year that travel comes roaring back. Here is what to expect:

Rental cars. Travelers can expect higher prices, and older cars with high mileage, since companies still haven’t been able to expand their fleets. Seeking an alternative? Car-sharing platforms might be a more affordable option.

Cruises. Despite a bumpy start to the year, thanks to Omicron’s surge, demand for cruises remains high. Luxury expedition voyages are particularly appealing right now, because they typically sail on smaller ships and steer away from crowded destinations.

Destinations. Cities are officially back: Travelers are eager to dive into the sights, bites and sounds of a metropolis like Parisor New York. For a more relaxing time, some resorts in the U.S. are pioneering an almost all-inclusive model that takes the guesswork out of planning a vacation.

Experiences. Travel options centered around sexual wellness (think couples retreats and beachfront sessions with intimacy coaches) are growing popular. Trips with an educational bent, meanwhile, are increasingly sought after by families with children.

On the Delaware River in Camden, N.J., one can walk and climb 1.5 miles of the giant battleship New Jersey. What often brings visitors to a battleship are the massive main guns — the New Jersey’s could toss a small compact car 24 miles. Visitors are encouraged to explore, and can view the New Jersey’s gun turrets, magazines, engine and boiler rooms. Deep in the ship, among 1940s analog computer tables and a cacophony of clanging bells, one can pull the actual triggers that ‘fire’ the main turrets, and be rewarded with a rumbling video showing the guns firing. Elsewhere is the “Jason’s Kids Kompartment,” a play area for younger children. Overnight programs for families and youth groups include dinner, firing the saluting gun and movie night in the mess decks. The ship also has an entertaining YouTube channel, hosted by the head curator Ryan Szimanski. Adult admission for self-guided tours is $25, children 5 to 11, $20; under 5, $5. Overnight programs are $75 per person.

In the second year of the Civil War, ironclad ship fought ironclad ship for the first time, with the U.S. Navy’s Monitor against the Confederate ship Virginia in the waters of Hampton Roads, Va. The heavyweight slugfest ended in a draw, and the Monitor sank in a storm that same year, laying undiscovered off North Carolina’s Cape Hatteras until 1973. Successive expeditions have salvaged the large central rotating turret, main guns and engines, and many recovered parts can be viewed at the Mariners’ Museum and Park in Newport News, Va. Admission for both children and adults: $1.

The Confederate States of America’s Hunley was the world’s first successful combat submarine, sinking the USS Housatonic in 1864. The Civil War win was short-lived: The underwater vessel disappeared that night and was only discovered in 1995. When she was raised in 2000, the remains of the eight-man crew were found inside. Now the main part of the submarine can be viewed from the mezzanine level at the Warren Lasch Conservation Center in Charleston, S.C., which also has on display many recovered artifacts. Admission: $18 for adults, $15 for seniors and veterans, and $10 for students and children 6 to 12.