Mardi Gras, Coachella and Other Events Are Back 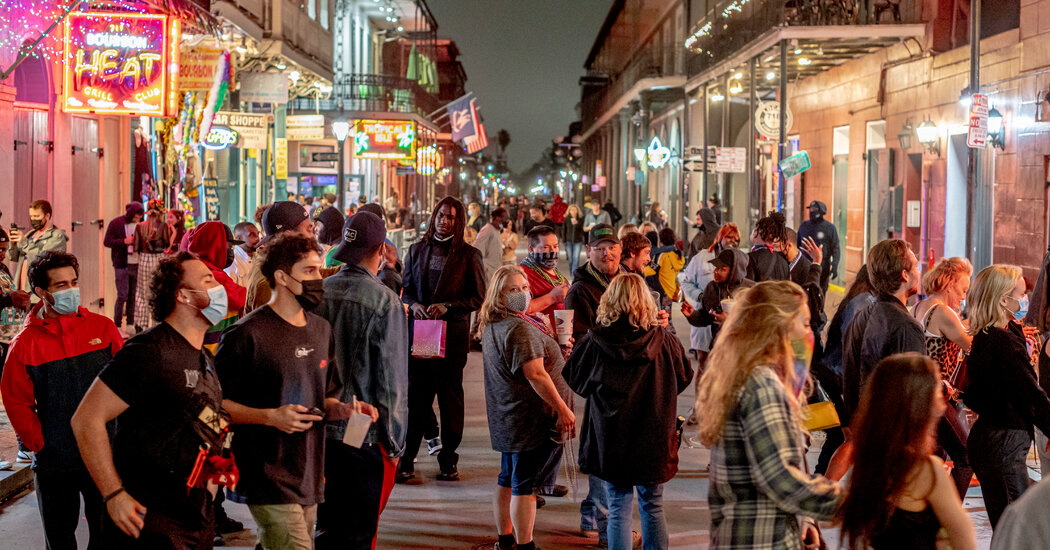 After being walloped in 2020 and 2021, organizers of major late winter and early spring events, from the Super Bowl to the National Cherry Blossom Festival, were hoping 2022 would offer a return to normal. But the rapid-fire spread of the Omicron variant has infected tens of millions of Americans and even more worldwide, and has the organizers of some big events changing plans. Just three weeks before it was scheduled to restart in person in Park City, Utah, the Sundance Film Festival, pivoted to an all-virtual edition, which launched Jan. 20.

The move was a blow to the already bruised hotel industry in Park City, though Dan Bullert, the president of the Park City Area Lodging Association, said that local hotels had been able to recoup some losses by marketing to skiers eager to capitalize on the lack of crowds.

“It’s definitely not a windfall, but the area has seen a rise in skier count with the absence of Sundance,” he said. “Canceling in early January was difficult for the community from a financial perspective, but we both understand and support the decision.”

There will be empty hotel rooms and empty stands in Beijing, as well: NBC Sports announcers will be covering the 2022 Winter Olympics from their studios in Connecticut when the games kick off on Feb. 4, and Olympic organizers announced on Jan. 17 that tickets would not be sold to the general public, but would be given to invited groups of residents of the Chinese mainland.

And in Rio de Janeiro, where millions of revelers were hoping to join the blocos and bandas for Carnival 2022 after the city’s famous street parties were canceled in 2021, hearts are broken once again: The samba-soaked celebration was canceled in early January, and the city’s parades have been postponed until April.

But other major gatherings planned for the coming months are moving forward, though with some alterations. Here’s how some big events will be staged during the Omicron surge.

Despite exploring potential alternative sites in Arlington, Texas, and elsewhere as virus levels in California climbed, National Football League officials have confirmed that the biggest U.S. sporting event of the year is set to kickoff Feb. 13 at SoFi Stadium in Los Angeles. Those watching Super Bowl LVI at home can expect to see masks on spectators — both in the stands and at related events. Los Angeles County requires masks indoors for all people age 2 and up regardless of vaccination status, and outdoors at any event with more than 5,000 attendees. SoFi Stadium seats 70,000, and can be expanded to hold 100,000 for events like the Super Bowl, which is being held without any capacity limits.

The N.F.L. Players Association, the league’s labor union, has canceled many of its social events in the lead-up to the big game, including its annual fund-raising jazz brunch, “Smocks and Jocks — where paintings by current and former players are auctioned for charity — citing Omicron’s spread (the auction is being held virtually). But across Los Angeles, social events for fans are on, including the Super Bowl Experience at the Los Angeles Convention Center downtown Sports Illustrated The Party, a bash in Century City that includes the musical guests Kygo and Jack Harlow; and the All Star Comedy Jam at the Microsoft Theater, presented by Shaquille O’Neal and LOLX, producers specializing in shows by comedians of color.

Adam Burke, the president and chief executive of the Los Angeles Tourism and Convention Board, estimates that Super Bowl LVI will bring in as much as $477 million to Los Angeles County.

“We anticipate that all neighborhoods will see a boom in business thanks to the Super Bowl,” he said.

Bracing for an influx of tourists and struggling with intensive care unit staffing shortages and ballooning case numbers, the New Orleans mayor, LaToya Cantrell, made a difficult decision on Jan. 11 — she brought back the city’s indoor mask mandate.

Beginning Feb 1., everyone age 5 and up will be required to show proof of two doses of a Covid-19 vaccine (or one dose of the Johnson & Johnson version) to access indoor dining, indoor entertainment or large-scale outdoor events.

Mardi Gras, which this year falls on March 1, was a primary motivation, said Dr. Jennifer Avegno, director of the New Orleans Health Department, in a news conference. After forging ahead in 2020 and inadvertently launching one of Louisiana’s first superspreader events, the city canceled parades in 2021. “We have to double down on measures more than ever before,” she said.

This year, the celebration is expected to once again draw millions to the city. Street parties and dozens of parades are planned, many in the days leading up to Mardi Gras itself, with minor adjustments from previous years: Citing staffing limitations on the New Orleans Police Department, the city has scaled down parades and altered some routes. Endymion, one of the largest and most anticipated parades, has changed its route. Its parade takes place on Saturday, Feb. 26 (they call it Samedi Gras) and winds from the Mid-City neighborhood to the Superdome.

Returning this year: “house floats,” the elaborate decorations that took the place of parades last year.

Austin’s annual festival of music, media and movies is back in person for the first time since 2019 — sort of. SXSW was scrapped entirely in 2020 and presented as a virtual event in 2021; in 2022, it will launch on March 11 as a hybrid festival with online and in-person options. Online attendees have access to speakers like the Pfizer chief executive, Dr. Albert Bourla, as well as SXSW’s film, comedy and music festivals; in person, attendees can visit sites, including the XR Experience, where they can sample virtual and augmented reality; and the Wellness Expo, with fitness classes and brands peddling everything from nonalcoholic cocktails to adaptive pet mattresses that can keep hot sleepers cool.

All in-person attendees are required to either provide proof of Covid-19 vaccination or a recent negative test, although a spokesman for the festival said they had yet to define the parameters of “recent.” The test can be antigen, molecular or P.C.R. as long as it would be otherwise approved for travel clearance to the United States; many home tests would not apply. Masks will be required in all conference session rooms, exhibitions and other spaces.

The festival is also asking all in-person attendees to commit to a health pledge, which includes wearing their mask properly (over both the nose and mouth); frequently washing and sanitizing hands; and staying home if they experience any symptoms of the virus.

Every March, the cherry blossoms burst open across Washington, D.C., in a pink flurry, which the city salutes with a four-week festival, scheduled to run from March 20 through April 17 this year. In 2020 and 2021, many events, including the festival’s flagship parade, were canceled. This year, all events are happening as planned and it’s full steam ahead, said Diana Mayhew, the festival president, albeit with a handful of adjustments.

In addition to the Blossom Kite Festival, where tens of thousands of attendees gather on the grounds of the Washington Monument to fly kites, “participants can also opt to take part in smaller kite-flying events at 10 to 14 selected parks around the city. Petalpalooza, the daylong festival of art and music at the Capitol Riverfront, is also being supplemented by several weeks of art installations, live entertainment and special restaurant menus in the same neighborhood. The parade, down Constitution Avenue, is scheduled on April 9.

“There are some people who may want to do a smaller event, with a couple hundred people versus thousands of people,” Ms. Mayhew said. “We had to think about how to be creative and innovative to make it comfortable for everybody.”

The annual music and arts festival is scheduled to return to the California desert for the first time since 2019 on April 15, with 250,000 gathering at the Empire Polo Club in Indio, Calif., for two consecutive weekends to watch the headliners, Billie Eilish, Harry Styles, and Ye, the artist formerly known as Kanye West. But after initially announcing that all revelers would be required to show proof of vaccination against Covid-19, festival organizers reversed course in October, as virus levels were falling. Now, despite case numbers again rising — and festival passes being completely sold out — that amended policy still holds.

The entry policy requires a negative Covid test taken within 72 hours or proof of full vaccination, according to a statement on the festival’s website. The test can be molecular, P.C.R. or antigen but must have been administered by an official testing center.

The virus has done little to dampen American appetites for boozy, sun-drenched beach breaks in the months of March and April, but it has shifted the map a bit. Data from the travel search engine Kayak shows that Orlando, Fla., is this year’s most popular Spring break destination, and among the top 10 destinations, the only international city on the list is Cancún, Mexico.

In 2019, Las Vegas held the top spot, London was among the 10 most popular destinations, and Los Angeles — which has strict mask and vaccination mandates and has since fallen to number eight — was the fourth-most visited city.

Across Florida, where masks are not required, hotels report strong bookings. Plans for pub crawls, pool parties and yacht events are up as well, according to local tourism officials.

“I am optimistic about what we will see in Orlando for the upcoming Spring break travel season,” said Casandra Matej, the president and chief executive of Visit Orlando, the local tourist board, in an email. “We continue to move closer to closing the gap to pre-pandemic visitor levels.”

But consumer behavior is still erratic, said James Moore, the general manager of The Balfour Hotel in Miami Beach, and booking windows remain short. This will be the first spring break season for The Balfour — the hotel opened last summer on Miami’s Ocean Drive, ground zero for city nightlife.

“We are seeing an influx of bookings occurring during 48 hours of check-in. Because travelers are keeping an eye on Covid, we are seeing a lot of last-minute bookings and we anticipate that happening with spring break,” he said.

Follow New York Times Travel on Instagram, Twitter and Facebook. And sign up for our weekly Travel Dispatch newsletter to receive expert tips on traveling smarter and inspiration for your next vacation. Dreaming up a future getaway or just armchair traveling? Check out our 52 Places for a Changed World for 2022.