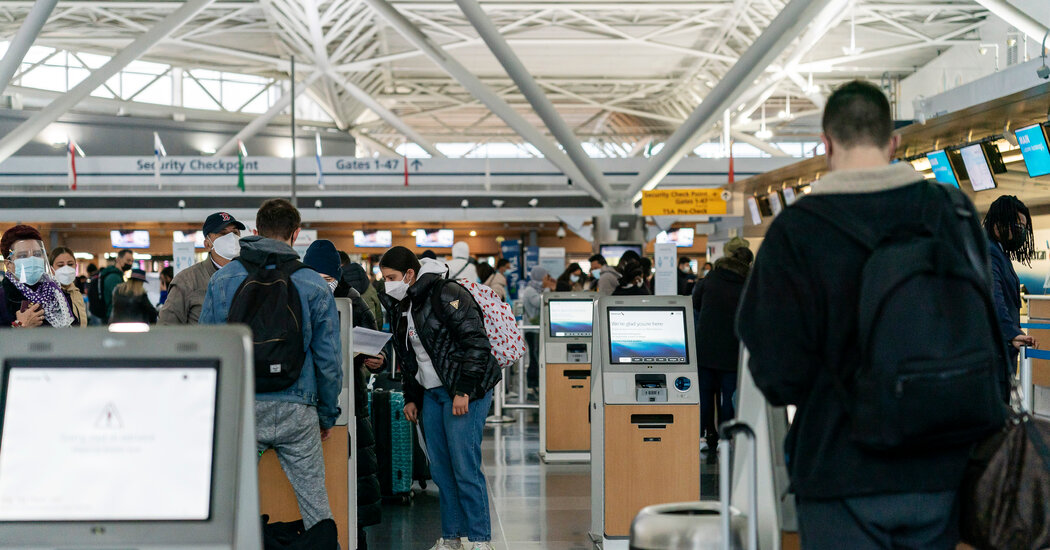 Airlines have been preparing for the holiday season for months, reviewing plans and readying reserves of workers. But that wasn’t enough to mitigate the effects of the fast-spreading Omicron coronavirus and of heavy snow and strong winds in the West.

The impact continued to be felt on Thursday, with more than 1,200 cancellations of flights to, from or within the United States by afternoon, according to the air travel data site FlightAware. The site also showed more than 640 cancellations for Friday.

The continued disruption comes as the country is averaging more than 260,000 new coronavirus cases a day, greater than the peak levels from last winter. Infection rates are especially high in parts of the Northeast and Midwest. Caseloads have continued to increase rapidly as the Omicron variant spreads, though deaths and hospitalizations have remained relatively steady.

The surge has disrupted far more than air travel. New York City has slowed to a crawl as the virus thins the ranks of subway workers and emergency personnel. Cincinnati declared a state of emergency on Wednesday to help the city deal with labor shortages within the city’s Fire Department amid a spike in coronavirus cases that coincided with scheduled holiday vacations. Many cities have canceled or limited New Year’s celebrations. More broadly, the pandemic has caused months of havoc in supply chains.

The air carriers hit hard on Thursday included JetBlue, with 17 percent of its total flights canceled. JetBlue said Wednesday that it was reducing its schedule through Jan. 13. In a statement, the airline said it had “seen a surge” in sick calls because of the Omicron variant, hampering its ability to staff its flights suitably even though it started the holidays with more workers than at any point since the pandemic began.

“We expect the number of Covid cases in the Northeast — where most of our crew members are based — to continue to surge for the next week or two,” the company said. “This means there is a high likelihood of additional cancellations until case counts start to come down.”

Alaska Airlines, whose primary hub is Seattle-Tacoma International Airport, canceled 14 percent of its flights. Relentless snowfall and record low temperatures in the Pacific Northwest grounded planes last week, and it snowed again in Seattle on Thursday.

Looking to relieve its staffing squeeze, the airline industry pushed for the Centers for Disease Control and Prevention to shorten its recommended isolation period for Americans infected with Covid-19. The agency had previously recommended that infected patients isolate for 10 days after a positive test. But on Monday, it reduced that period to five days for those without symptoms and those without fevers whose other symptoms were resolving.

Delta Air Lines was one of the first companies to adapt to the updated guidance. Its new policy, dated Tuesday, provides five days of paid leave for vaccinated workers who test positive for the coronavirus to isolate, according to an internal communication to company leaders obtained by The New York Times.

The policy encourages, but does not require, a Covid test to go back to work — going a step further than the C.D.C. guidance, which does not include a recommendation for additional testing — and Delta is offering two additional days of paid time off for workers who test positive on Day 5. But the airline’s protocols make no mention of whether returning employees should have improving symptoms, as suggested by the C.D.C.

Megabus, a long-distance bus operator, said Thursday that it is offering free rides on routes in the U.S. and Canada to travelers whose flights are canceled between Dec. 27 and Jan. 7.