Istanbul Is Locking Down. But Not if You’re a Tourist. 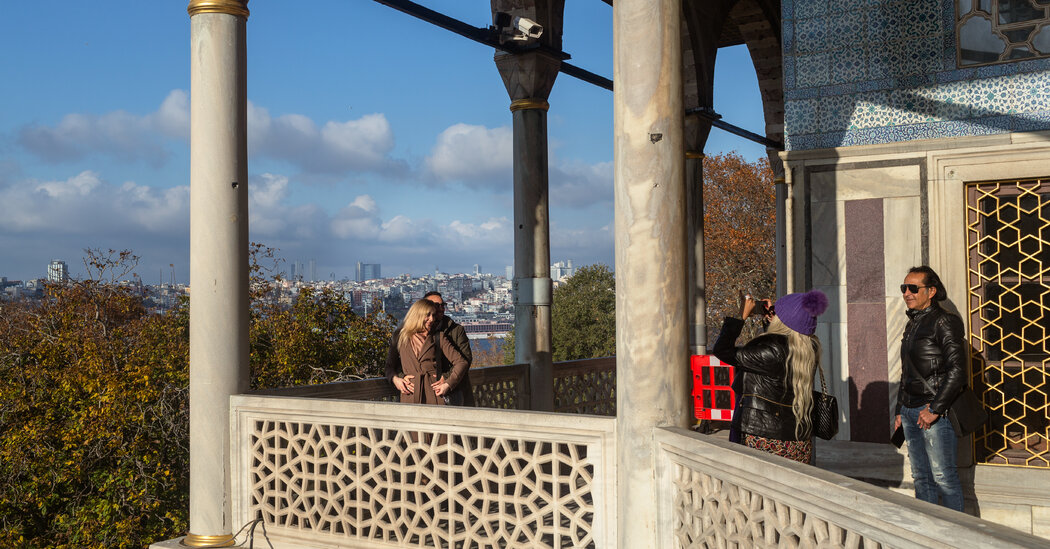 Across Europe, a strict new set of lockdown measures has emptied the streets of cities like Rome, Paris and London, where hordes of tourists usually crowd the streets.

And then there’s Istanbul.

Residents of Turkey’s liveliest and most populous city were ordered to stay at home this past weekend as part of a strict curfew, issued by the government last week to curb a dangerous resurgence of the coronavirus. Under the nationwide restrictions, which will likely continue into the coming weeks, nobody was allowed to venture outside between 9 p.m. on Friday and 5 a.m. on Monday, with fines for those who broke the rules.

But foreign tourists are exempt from the order, meaning that they were free to see the sights, walk the streets and ride the ferries across the Bosporus, even as residents were compelled to stay home.

Most museums, including the Topkapi and Dolmabahce palaces, stayed open for tourists over the weekend, and some restaurants in the old city of Sultanahmet secretly opened doors for visitors willing to eat inside. Hotels also offered indoor and outdoor dining for visitors. On Saturday afternoon, guests at the upscale Shangri-La hotel sat on the terrace basking under the sunshine and eating fresh seafood with glasses of crisp cold white wine.

“You almost expect to get punished for traveling these days with all the shaming and ever-changing restrictions, but here we are with exclusive access to one of the most beautiful and enchanting cities of the world,” said Erin Lockhart, a 32-year-old British musician, as she played her guitar against the backdrop of the glistening Bosporus that stood as still as a pond in the absence of regular boat traffic.

Ms. Lockhart decided to travel to Istanbul last week to meet up with her American boyfriend because it was one of the few cities that they could both fly to directly without having to quarantine. They, like the other tourists encountered on the city’s streets over the weekend, hadn’t known before they arrived that they would be free to wander the city.

Since reopening its borders to international tourists in June, Turkey has not required testing or quarantine upon arrival. Health screening and temperature checks are carried out at airports and anybody found to have Covid-19 symptoms is taken to a medical facility for testing.

The country’s tourism sector is poised to shrink by 70 percent this year, bringing in 15 million visitors and more than $11 billion in revenue, a steep drop from the 45 million visitors and $35 billion in revenue in 2019, according to statistics from the Ministry of Culture and Tourism. Despite an effort to salvage the industry with the creation this summer of a healthy tourism certification program, designed to ensure that travel and hospitality sectors met the government’s health and hygiene requirements, arrivals were down by 86 percent in July, compared to the same period in 2019.

Much of Europe is currently under some form of lockdown. The European Union’s travel commission said it did not track whether tourists were being exempted in other cities. But a look at the regulations across the union found no other country allowing visitors free rein while its own population was under a stay-at-home edict.

Many international tourists visiting Istanbul over the weekend were from Russia and the Middle East, but Europeans and Americans were also among the crowds. For many, the decision to travel to Turkey was triggered by lockdown fatigue.

“Life is too short to stay at home for another year,” said Ana Nicolas, a 53-year-old Spanish tourist, who was visiting from Madrid, which is under a nationwide curfew and state of emergency scheduled to last until early May 2021. “We felt like animals locked in a cage for too long and we wanted to escape and see a new place with different energy and culture.”

Yet the atmosphere and the energy of Istanbul were severely dampened by the weekend curfew, with shuttered restaurants and shops and locals confined to their homes. The commotion of bustling Istanbul life — the traffic, car horns, fishermen, crisscrossing passenger ferries, clanking construction and pungent smells of street food stands — gave way to a surreal hush, so quiet that the sound of sea gulls and crowing roosters pierced the air.

“It’s certainly a unique experience to have a city to yourself,” said Marc Heroux, a 48-year-old French financial analyst, who spent the day exploring museums with a friend visiting from Germany. “It is amazing to see all the exhibitions without any crowds. You feel like a V.I.P. and it feels very safe,” he said.

On Saturday and Sunday plainclothes police officers patrolled the streets and police set up checkpoints across different districts to check the ID cards and passports of people traveling through, one by one. Turkish essential workers were allowed to proceed, as were tourists. Everyone else was subject to a fine of 3,150 Turkish lira, around $400.

Turkey’s decision to enter into a full nationwide lockdown at the weekend was in response to a rapid surge in infections and to a record number of deaths, which more than doubled in less than three weeks. For most visitors, the call to prayer, which echoes through the city five times a day, is likely indistinguishable from the somber funeral prayers that are broadcast all too often as the pandemic has raged in recent weeks.

But few tourists voiced concerns about the risks posed by the pandemic.

“I feel safe because I have antibodies,” said Bagrta Kalachinov, a 36-year-old visitor from Moscow. Looking out at the silhouette of the old city’s minarets from the top of the Galata Tower, Ms. Kalachinov’s husband, Denis, said he felt safer in Turkey than at home in Russia, where few people wear masks and all businesses are open as usual.

“At first it was a bit boring here because bars and restaurants are closed, but now we have found some places close to our hotel that let us come inside, even though it looks closed outside,” Mr. Kalachinov said.

Travel industry workers were trying to capitalize on the opportunities presented by the curfew exemption for tourists.

Outside a cafe, a man dressed in a sultan costume tried to lure patrons with the promise of fresh pastries and socially distant indoor seating. A traditional Turkish ice cream vendor, who is famous for his scooping tricks, put on a show, and a souvenir shop opened its doors for a group of women from West Africa looking to buy Turkish coffee and leather handbags.

“This year has been a complete write-off, especially for Istanbul,” said Cuneyt Uygur, a Turkish tour guide based in the city. “We’ll see if this effort to stay open for tourism will help bring more people in. It depends on how satisfied they are when they return home.”

The majority of tourists currently visiting the city are young and adventurous, Mr. Uygur said, expressing concern that they might get restless with so many of the city’s attractions closed off. On Monday morning, retailers were allowed to open and cafes and restaurants offered takeout and delivery services.

“It’s not your average holiday, but it’s cool to just be able to roam about a city with so few people in it and sit in the sunshine with a beer and a snack,” said Mandy Miller, a 26-year-old student from London, who traveled to Turkey for a week with her boyfriend without telling her family and friends.

“Everybody makes such a fuss about the virus, but most people who have had it are fine,” she said, as she fed a stray dog the leftovers of her chicken kebab wrap. “We’ve got to just be brave and live as normal as we can,” she added, as a group of tourists lined up behind her to take selfies in front the Ortakoy mosque. “It should be this free and relaxed everywhere. London is so depressing,” she added.

While some Turks welcomed the two-tier curfew system, saying it was good for the economy, others felt it was inappropriate for tourists to be gallivanting around the city while locals bear the brunt of a grueling second wave of the virus.

“I’m happy for tourists to visit my country, but when hospitals are full and people are dying, this is not an appropriate time to be adventurous,” said Tulin Polat, 26, who was laid off from her waitressing job because of the new lockdown measures.

“Accepting tourists without testing only makes the situation worse,” she continued. “We are told to stay home, but we tell them to go out and explore. Basically, we are giving them the green light to spread the virus.”