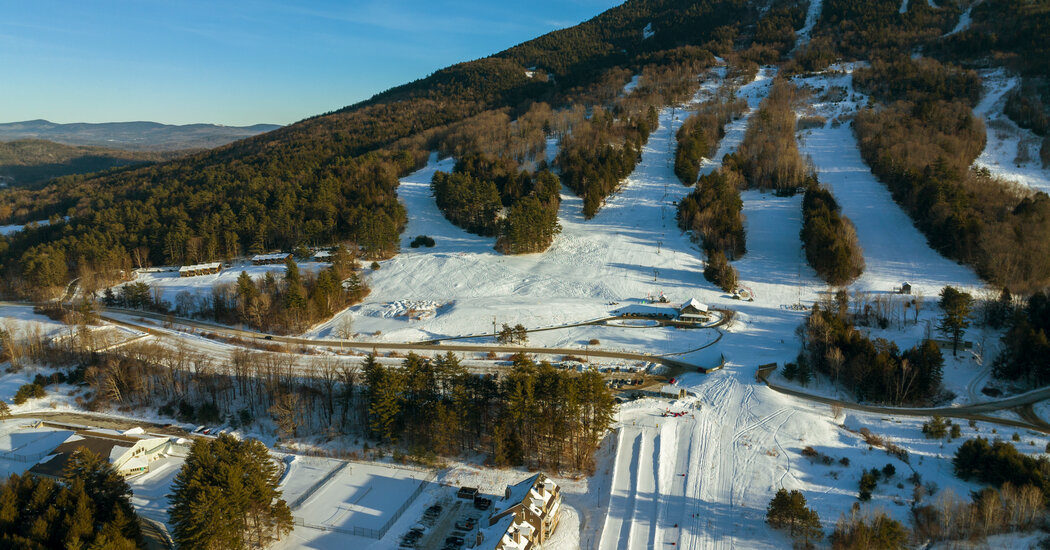 Jim Lyall briskly skied up Mount Ascutney, eagerly pointing out the view. We were skinning up a ski area in southern Vermont, but the chairlifts are long gone. At the top of the mountain we arrived at an abandoned ski patrol cabin and lift station. A cold breeze whipped through the deserted structures. It had a ghostly, post-apocalyptic feel.

Mr. Lyall beckoned me up an old chairlift ramp. He swept his ski pole across the panorama and pointed to the snow-covered summits of Okemo and Killington, ski resorts that lie within a 30-mile radius. The White Mountains of New Hampshire felt close enough to touch.

“There would be many times that I would stand up here and watch storms dump snow on those ski areas and just bypass Ascutney. We couldn’t win,” said Mr. Lyall, an avid backcountry skier.

In its heyday, the Ascutney ski resort boasted 1,800 vertical feet of skiing on over 50 trails, and included a high-speed quad chairlift, three triple chairlifts and a double chairlift. But when it closed in 2010 because of scant snow and mismanagement (twin killers of small ski resorts), it threatened to take with it the nearby community of West Windsor, Vt., population 1,099.

“Property values plummeted, condos on the mountain saw their value decrease by more than half, and taxes went up,” recalled Glenn Seward, who worked at the resort for 18 years, once as the director of mountain operations. The town’s general store, the gathering place of the community, also went broke and closed.

“We were desperate,” said Mr. Seward, who at the time was chair of the West Windsor Selectboard, a Vermont town’s equivalent of a city council.

That desperation led the community to hitch its fortune to the mountain, becoming a model for how a small ski area and its community can thrive in the era of climate change. Working with the state of Vermont as well as the nonprofit Trust for Public Land, the town bought the failed ski area in 2015. But instead of allowing a private company to run the mountain, contracting out its operations, the local residents themselves would chart a sustainable, volunteer-driven path for the ski area.

Seven years later, Mount Ascutney and West Windsor are magnets for families and outdoor enthusiasts. Between 2010 and 2020, the town’s population jumped over 20 percent and median single-family home sale prices more than doubled, to $329,750. A bustling new general store featuring local products has opened in the village of Brownsville, reinvigorating the center of the West Windsor community. The town and mountain draw people year round, from endurance runners and mountain bikers in the warm months to skiers in winter.

At the heart of this revival is Ascutney Outdoors, a nonprofit with over 100 volunteers that now runs recreation on the mountain. Instead of high-speed quads and snow-making, skiers take a rope tow or T-bar that accesses 435-vertical feet of skiing, found on 10 natural-snow trails that are groomed. There is also a lift for snow tubing. A lift ticket costs $20, or $100 for a season pass. The lifts run on Saturday and Sunday when there is enough snow, and it takes about 40 volunteers to staff a busy weekend.

The upper 1,300 vertical feet of the mountain, maintained by Ascutney Trails Association, is reserved for backcountry skiers to skin up and ski down for free — though donations are appreciated. Thursday night ski races take place under lights, and an after-school program brings children to the mountain every afternoon. The mountain is also home to 45 miles of renowned mountain bike trails, numerous hiking trails and Mt. Ascutney State Park. It is one of the top hang-gliding sites in New England.

“When there’s snow, we ski, and when there’s not, we do other things,” said Mr. Seward, who is now executive director of Ascutney Outdoors. “That’s a pretty easy model to sustain.”

“We lost our identity as a ski town”

Mount Ascutney (elevation 3,144 feet), Vermont’s most famous volcano, has lured skiers for decades. Skiing began on Ascutney in the winter of 1935-36 on the 5,400-foot long Mount Ascutney Trail, opened by the Civilian Conservation Corps and the Windsor Outing Club. The first skiers skinned up the mountain under their own power, just like backcountry skiers today. The Mt. Ascutney ski area opened in 1946 with rope tows. In a harbinger of the struggles to come, the ski area endured several poor winters and went bankrupt four years after opening.

New owners periodically came and went and Ascutney remade itself as a destination resort, attracting tourists and second-home owners from New York, Connecticut and Massachusetts. It was described in a 2005 New York Times article as “less fashionable than some of its competitors” with a base lodge that was “small and utilitarian.” Local skiers continued to be its loyal mainstay.

Ascutney Resort was bedeviled by years of erratic snow levels. In the 1980s, a new ownership group, Summit Ventures, poured $55 million into lifts, condos and snow-making. A hotel was built at the foot of the mountain (it is now a Holiday Inn Club Vacations). By 1991, the ski area was forced into liquidation. The ski resort closed for the final time in 2010 and sold off its lifts. It was a crushing blow for the community.

“We lost our identity as a ski town,” said Mr. Seward, who grew up in the community and married his wife, Shelley, on the mountain.

Jim Lyall added: “You saw everyone at the school, the general store, the post office, and at the ski area. We were in jeopardy of losing all four and becoming just a bedroom community.”

Skiing in a warming world

Climate change poses an existential threat to New England ski areas, which now number 89 in six states. A 2019 study showed that in northeastern states besides Vermont, at least half of ski areas will close by the mid 2050s if high greenhouse gas emissions continue. A study published in 2021 in the journal Climate showed that New England is warming significantly faster than the rest of the planet. From 1900 to 2020, winter temperatures in Vermont rose 5.26 degrees Fahrenheit.

“That means more of our winter precipitation is falling as rain instead of snow, less of it is accumulating on the ground, and there is more midwinter melt,” said Elizabeth Burakowski, research assistant professor at the Institute for the Study of Earth, Oceans, and Space at the University of New Hampshire.

New England is littered with the ghosts of abandoned ski areas: According to the New England Lost Ski Areas Project, more than 600 ski areas have closed in the region.

Ski industry leaders warn that the survival of ski areas depends on political action. “It’s absolutely critical that the business leaders in the outdoor and ski industries come together to strongly advocate for bipartisan climate action at the federal and state levels,” said Adrienne Saia Isaac, director of marketing and communications for the National Ski Areas Association.

West Windsor was determined to reimagine a future that did not rely on the vagaries of winter. In 2014, the West Windsor Selectboard asked the Trust for Public Land to help it purchase and conserve 469 acres of the former ski area to be used for backcountry skiing, mountain biking and other human-powered recreation. The ski area would be added to the existing town forest and protected by a 1,581-acre conservation easement safeguarding the land from development. A special town meeting was held in October 2014 asking West Windsor voters to approve the town spending $105,000 toward the $640,000 purchase of the former ski area, part of the $905,000 project price to return the land to recreational use. The purchase was approved by a three-to-one margin.

In 2015, a group of townspeople gathered at Jim Lyall’s house to start Ascutney Outdoors. A new rope tow was installed that same year, followed by the tubing lift in 2017 and a T-bar in 2020. The community raised funds to build the Ascutney Outdoor Center, a 3,000-square-foot base lodge, at the foot of the mountain.

Brownsville Butcher and Pantry is minutes from Ascutney Outdoors, and their fates are tightly bound.

Peter Varkonyi and Lauren Stevens opened the store in November 2018, and on a recent weekday, cheerily greeted a steady stream of customers and regulars. This is not your typical general store. It has a wall of Vermont craft beer and a butcher was carving a side of pork hung from a meat hook in front of refrigerator cases that include Vermont Wagyu beef, fresh goat and all the makings for sushi. In the cafe nearby, customers can choose from homemade bagels and housemade hot pastrami to a vegetarian smoked-beet Reuben and three varieties of burgers.

In 2018, a community group, Friends of the Brownsville General Store, bought the foreclosed building from the bank for $95,000 and invested $250,000 to renovate it. The group then leased the building to Mr. Varkonyi and Ms. Stevens for $1 per year, with an option that the couple could purchase it at any time for cost. Chris Nesbitt, an organizer of the Friends group, urged his neighbors to “think of this like the common good. You are investing in the community.”

Buying local “is the basis to what we do every day,” said Ms. Stevens, proudly itemizing $35,000 in purchases of organic produce from Edgewater Farm in Plainfield, N.H., and $30,000 in lamb, goat and pork from Yates Farm just down the road. In 2021, she tallied, “our tiny business put $500,000 back into local businesses.” In December, the couple bought the store from the Friends.

A lifelong resident of the community and teacher at the local elementary school, Amanda Yates, was sitting with her young son enjoying burger night at the general store. Ms. Yates motioned to the bustling cafe and store. “I credit the store and Ascutney Outdoors with bringing the town back,” she said. “They brought places where you could meet, get good food, where you could see people again around town.

“They really brought back that community hub.”

David Goodman is the author of “Best Backcountry Skiing in the Northeast” (AMC Books) and host of “The Vermont Conversation,” a public affairs radio show and podcast.