How to Pretend You’re in Tokyo 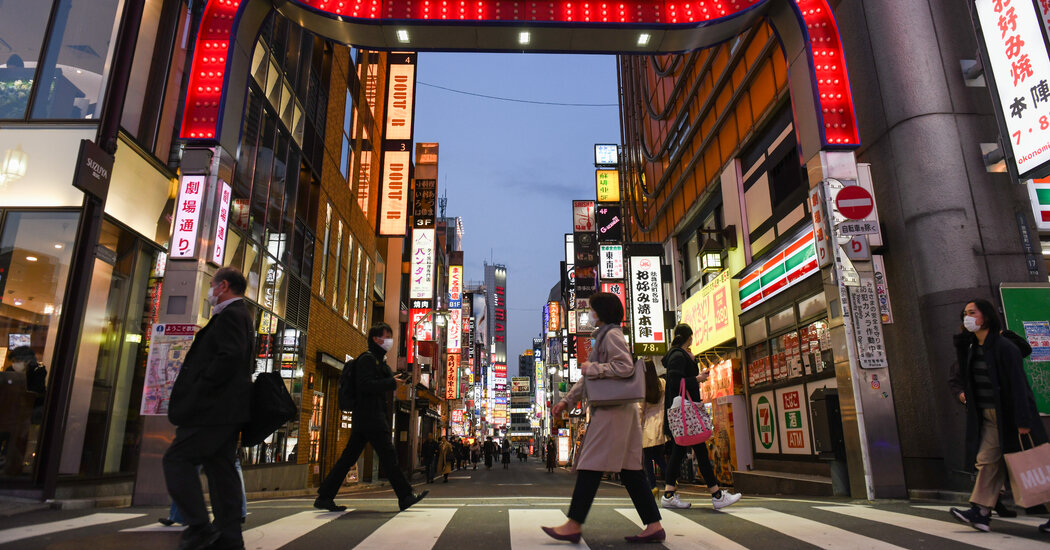 While your travel plans may be on hold, you can pretend you’re somewhere new for the night. Around the World at Home invites you to channel the spirit of a new place each week with recommendations on how to explore the culture, all from the comfort of your home.

A few years ago, I walked through Tokyo’s neon-lit streets for the first time, wide-eyed and jet-lagged. It only took three days to learn some of the city’s secrets. If you can’t find the perfect noodle shop for lunch, for example, look up and you will see another dozen options, filling the upper floors of what you thought were office buildings. Or that famous places — like Shibuya Crossing, the intersection you’ve seen in 100 timelapses — are famous for a reason, but there’s so much more to learn by picking a metro stop at random and going for a long walk.

This was supposed to be a big year for tourism for the city — already one of the world’s most visited — as it was set to host the now postponed Olympics and Paralympic Games. That, of course, did not happen.

With most of the world still confined to their homes, that Tokyo trip will have to wait for the millions of people who canceled flights and hotel bookings. In the meantime, there are ways to capture the spirit of a sometimes impenetrable, always fascinating, city. Perhaps, just for a night, these recommendations might even make you feel like you are there.

I first met Kazuto Okawa, who performs under the name LLLL, outside a convenience store in the quirky neighborhood of Koenji on my first night in Tokyo. He was sitting on a curb in a circle of friends, his face obscured by long, disheveled hair. Over the years since that first encounter, his music — a blend of sugary pop hooks and space-age soundscapes — has become synonymous with the city for me. If those conflicting feelings of disorientation and joy that hit every visitor to Tokyo could be translated to sound, this would be it.

When I asked Mr. Okawa what music best captures his home city, he directed me to the classics. The musician Keigo Oyamada, better known as Cornelius, is sometimes reductively called the “Japanese Beck” for the way he swoops between genres with ease. Every album is a journey, but for the most evocative of the city, Mr. Okawa suggests his 1995 album “69/96.” “It’s forever futuristic,” he said. “A perfect match to Tokyo.”

If Cornelius is too out there for you, Mr. Okawa recommends “Kazemachi Roman” by Tokyo folk rock pioneers Happy End: you may recognize a song from the soundtrack to that great tribute to Tokyo, “Lost in Translation.”

To begin understanding the phenomenon that is Tokyo’s J-pop scene, Mr. Okawa says to start with Sheena Ringo’s “Kabukicho no joou.” “It captures the dark side of the city,” he said. “And it happens to be one of the most popular J-pop songs of all time.” For the flip side of the same pop coin — perhaps it’s a more lively summer night you are trying to recreate — he recommends Taeko Ohnuki’s aptly titled “Sunshower.”

Cook at the dinner table

No trip to Tokyo is complete without a whole lot of eating. While it may be hard to accurately recreate a bona fide Tokyo bowl of ramen or plate of sushi, there is plenty that you can do from home.

Head to New York Times Cooking for a selection of quick and easy dishes, from yakitori (yes, you really can make it at home) to nori chips (perfect with a cold Japanese lager).

For something more involved, and seasonally appropriate, follow the lead of Motoko Rich, The Times’ Tokyo bureau chief. “With the weather getting cooler, it’s time to break out the butane burner for shabu shabu, a classic Japanese dinner that you can make and eat right at the table,” she said.

First, make a kombu dashi, a broth flavored with dried kelp, then take beef, tofu, vegetables and mushrooms and dip them into the bubbling liquid, making sure to swirl in the ingredients long enough that they cook through. “Although we can cook shabu shabu at home, it also reminds me of fancier mid-20th century-era restaurants in Tokyo, where the servers wear kimonos and carry regal platters to the tables.” Ms. Rich recommends this recipe from Just One Cookbook.

If you want to lose yourself in Tokyo by curling up with a good book, we have plenty of recommendations, whether it is a long work of fiction you are after or more snackable short stories. There is more — a lot more — than Haruki Murakami. Ms. Rich recommends “Breasts and Eggs” by Mieko Kawakami. “I love the way Kawakami references real and recognizable, but not exoticized, Tokyo locations,” she said. “You feel in the know, reading it, rather than as if you are being introduced to a precious Other World. It is Tokyo as it is lived in, not a film set.”

See the city on the screen

If an evening of TV and subtitles is what you are after, start with the binge-worthy “Midnight Diner: Tokyo Stories” on Netflix. The show is about the customers who pass through a tiny counter-service restaurant that is only open from midnight to 6. At turns heartwarming, hilarious and melancholic, it is a moving portrait of Tokyo after dark. If the opening title sequence doesn’t make you feel good, check your pulse: it is ASMR for the soul.

When it comes to movies, as Mike Hale, a Times’ television critic, said, “Tokyo is simultaneously the most cosmopolitan and the most intensely local city you can imagine, and that’s a perfect combination for storytelling, as directors from Kurosawa to Kiarostami to Sofia Coppola have shown.”

Where to start then? You can’t skip Akira Kurosawa, the influential filmmaker whose career spanned almost six decades. Mr. Hale recommends “Stray Dog” (1949), shot in Tokyo in the aftermath of World War II. He describes it as “a walking tour of the city in sheer survival mode.” Next, try “Tokyo Drifter” (1966) by Seijun Suzuki. “Suzuki’s stylized yakuza story sets traditional themes of honor and corruption against a jazzy, jagged, surrealist distillation of the rapidly changing city,” he said. Finally, for something more contemporary, watch the Cannes Palm d’Or-winning “Shoplifters” (2018) by Hirokazu Kore-eda. In Mr. Hale’s view, the film, about a family of grifters, “shows both the glittering modern metropolis and the shadow world just beyond the neon.”

Get lost in the virtual world

While Japan’s most internationally famous video gaming figure may be an Italian plumber with a taste for mushrooms, there are also plenty of games more grounded in real-life Tokyo than Super Mario Bros. Brian Ashcraft, an Osaka-based senior writer at the gaming website Kotaku, recommends the expansive “Yakuza” series, which follows Kazuma Kiryu as he makes his name in the underworld. The Yakuza games are action-packed, but with dance battles, karaoke sessions and laugh-out-loud dialogue, they are also unabashedly silly. “This year has resulted in all events and trips to Tokyo being canned,” Mr. Ashcraft said. “The Yakuza games do a fantastic job of bringing parts of the city to life. These obsessive, digital recreations mimic the idea of Tokyo. For me, that’s good enough.”