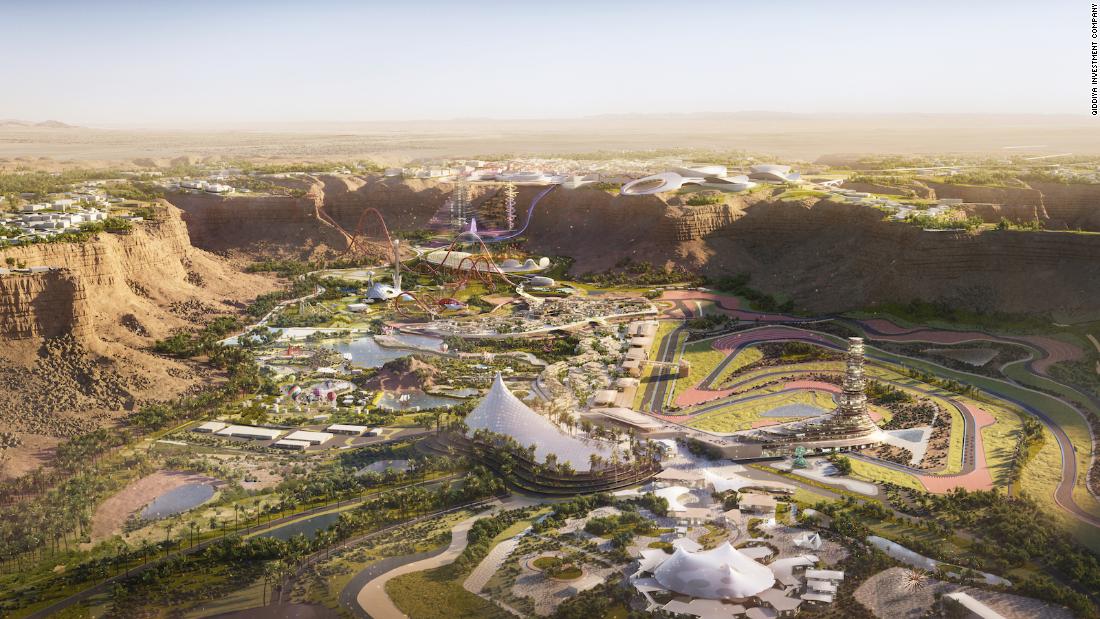 (CNN) — A roller coaster now under development in the Middle East is set to smash existing records for speed, height and track length.

Called “Falcon’s Flight,” the ride will be the main attraction of Six Flags Qiddiya, due to open in Saudi Arabia outside of capital Riyadh in 2023.

According to a press release issued by the Qiddiya Investment Company, which has partnered with US-headquartered Six Flags to build the park, the coaster will travel across four kilometers (about 2.5 miles) of track.

Riders will experience the thrill of diving over a vertical cliff into a 160-meter-deep valley (525 feet) thanks to the use of magnetic motor acceleration (LSM technology), and “achieve unprecedented speeds of 250-plus km/h” — about 155 miles per hour.

It will take up to 20 passengers on a three-minute long ride that and offers panoramic views of Six Flags Qiddiya. If the video rendering produced by Qiddiya is an accurate depiction of what guests will experience, this one’s only for true thrill seekers.

As for the park, Six Flags Qiddiya will feature 28 rides and attractions across six themed lands: The City of Thrills; Discovery Springs; Steam Town; Twilight Gardens; Valley of Fortune; and Grand Exposition.

Appropriately, the Falcon’s Flight will be part of the City of Thrills, along with Sirocco Tower, which will be the world’s tallest drop-tower ride.

Construction on the park, located about 40 minutes from Riyadh, kicked off in 2018.

The Falcon’s Flight is being designed by Intamin. Headquartered in Liechtenstein, it’s been creating theme park attractions for over 50 years and is behind many of the world’s most famous rides. That includes the current holder of the world’s fastest roller coaster title — the Formula Rossa, at Ferrari World Abu Dhabi in the United Arab Emirates. It travels at speeds of up to 240 kilometers (149 miles) per hour.

And finally, the longest roller coaster on the planet right now is the Steel Dragon 2000. Developed by D. H. Morgan Manufacturing, it can be found inside Japan’s Nagashima Spa Land amusement park in Nagashima, Kuwana.