Exploring Classical Music at its Source

My parents did right by me with music. My father led me to piano lessons when I was 6, and my mother was an avid record collector who loved to buy records of all kinds: popular music, classical, jazz, calypso, even rock and roll. So, I grew up with a great richness of music, which has provided me with infinite pleasure, enrichment and comfort. When music comes on, it can instantly change the way you feel.

At some point I woke up to the odd realization that the great composers who created classical music lived in a world where the only way you could hear music was if a musician was playing. Music was not something you could receive at the touch of a button on an electronic device. How vastly different that world must have been! It’s a strain for my imaginative faculties to even attempt to imagine what it would have been like to live in the world that produced that legacy of sublime music.

But if I want to try to get some understanding of life in the 18th and 19th centuries, it seems music would be a good way to gain entry. As part of my lifetime fascination with music, I booked a tour into the heart of classical music. It took me through many of the musical centers of Europe, including Prague, Salzburg and Budapest. Each of those cities has rich musical history. Budapest, Hungary, was the home of Franz Liszt, Bela Bartok and Gustav Mahler, a central point of European culture and politics for centuries. Salzburg was an independent state and not yet part of Austria when Mozart was born there in 1756. And Prague was one of the most glorious musical centers of Europe. It was a home away from home for Mozart, who wrote a symphony expressly for the city, as well as the home of composers Dvorak and Smetana. But the unchallenged highlight of the trip, when it comes to music, was Vienna. 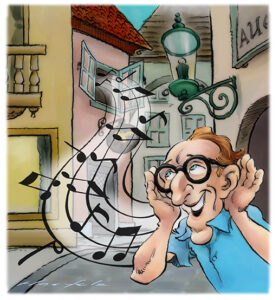 Today, classical music is everywhere. There are fine orchestras in all the major cities, and music is always available electronically. But at its beginning, classical music was a phenomenon of Europe. It spread rapidly through the continent via the rivers that were the highways of the times, especially the Danube, as immortalized by Johann Strauss. There is rich musical history and tradition to be found in all the great cities of Europe, and even in small villages. But that history is most concentrated in Central Europe, and the heart is Vienna. There is no more of a musical city than Vienna.

Music is in the air in Vienna as nowhere else. You can feel that historical legacy everywhere. While the New York subway clangs with a jarring, dissonant sound, Vienna’s subway, the world’s first, hums with gentle harmonic chimes. Musicians of astonishing skill perform on the streets. Everywhere you go the people, who are the soul of the living city, seem to proclaim without words: This is Vienna, “the center of the world.” Vienna has a sense of self-sufficiency that makes the Viennese seem oblivious to the fact that there is a world beyond, or any need for one.

Every art form begins by borrowing from a previous art form, and the classical music of Vienna had its roots in the Italian Baroque. The world owes a great debt to the Habsburg dynasty that ruled most of Europe from 1278 to 1918. They were autocrats, but they were also musicians and lavish patrons of music. They laid the foundations for classical music.

It started 100 years before Haydn, when Leopold I brought Italian musicians to the court. Leopold staged operas in the open air that were attended by thousands. Leopold was himself a composer of sacred music and oratorios, some of which are still played today. Joseph II, the emperor during Mozart’s time and the brother of Marie Antionette, was Leopold’s great-grandson. He was also an able musician who played music every day.

The Habsburg emperors kept their own orchestras, and the noble class imitated them by keeping their own orchestras, making Vienna a great center for musicians to find work. The musical culture of Vienna continued to grow and marinate, influenced by the cultures of the many ethnic groups that were drawn to Vienna.

I visited historical sites and saw performances in many cities along the way, but the experiences that were etched most deeply into my memory were visiting some of the homes of the great composers in Vienna. One of the most intriguing places was the Mozart Figaro House, where he composed “The Marriage of Figaro.” Mozart lived there with his family from 1784 to 1787.

It was where he composed the six string quartets he dedicated to Joseph Haydn, and “Papa” Haydn came and saw three of them performed there. There’s a legend that when Beethoven first came to Vienna at age 17, from Bonn, Germany, he met Mozart in that house, and played piano for him. According to the story, Mozart was impressed by Beethoven’s improvisatory skills and said, “Watch this young man; he will yet make a noise in the world.”

If that story is true, that apartment saw the presence of Mozart, Haydn and Beethoven. But the story of Beethoven can’t be confirmed, and almost immediately after Beethoven arrived in Vienna, his mother died and he was forced to return to Bonn. It would be five years before he could return and restart his career.

Johannes Brahms also visited that apartment when the violin virtuoso Julius Epstein lived there, 80 years after Mozart. So, the place is thick with musical vibrations and history. Now it’s a museum, so you can stand where all those great composers were and absorb it all.

You’ll find 23 carat gold leaf on walls and ceilings, an ornate gilded stove and a crystal chandelier, showing that Mozart was a rich man when he lived there. Historians are not sure why he fell into financial trouble, but he was a gambler and liked to live the lush life.

I visited the tiny apartment where Schubert was born and lived with his schoolteacher father and mother and four siblings. I saw where he was born in the kitchen and kept near the stove. Schubert’s father wanted him to be a schoolteacher, but his musical talent gained him admission to the Vienna Boys Choir. He tried being a teacher, but couldn’t stand it. He needed to compose all the time. He composed 1,000 works, including 600 songs, many of which were popular during his time. But his symphonies were destined only for the drawer of his writing desk during his lifetime.

There’s a portrait in the apartment of Therese Grob, whom he wanted to marry. But he was not wealthy enough, so instead she married a baker. Schubert died at age 31 of typhus.

The most compelling of the composers’ homes was Beethoven’s Heiligenstadt residence, one of 80 apartments where Beethoven lived during his 35 years in Vienna. It was in a vintner’s house when Beethoven lived there in the summer of 1802. You can look out the window where Beethoven stood when he was 32 years old and saw a bell tolling but could not hear it. It was there that he wrote the letter to his brothers that became known as “The Heiligenstadt Testament.”

“What a humiliation,” he wrote, “when one stood beside me and heard a flute in the distance and I heard nothing, or someone heard the shepherd singing and again I heard nothing. Such incidents brought me to the verge of despair, but little more and I would have put an end to my life. Only art it was that withheld me. Ah, it seemed impossible to leave the world until I had produced all that I felt called upon me to produce.”

It’s crushingly tragic, but Beethoven did his best work after that. Standing in that room can bring you very close to his tragedy, as well as his incredible triumph over it.

Only in Vienna can you have experiences such as this.