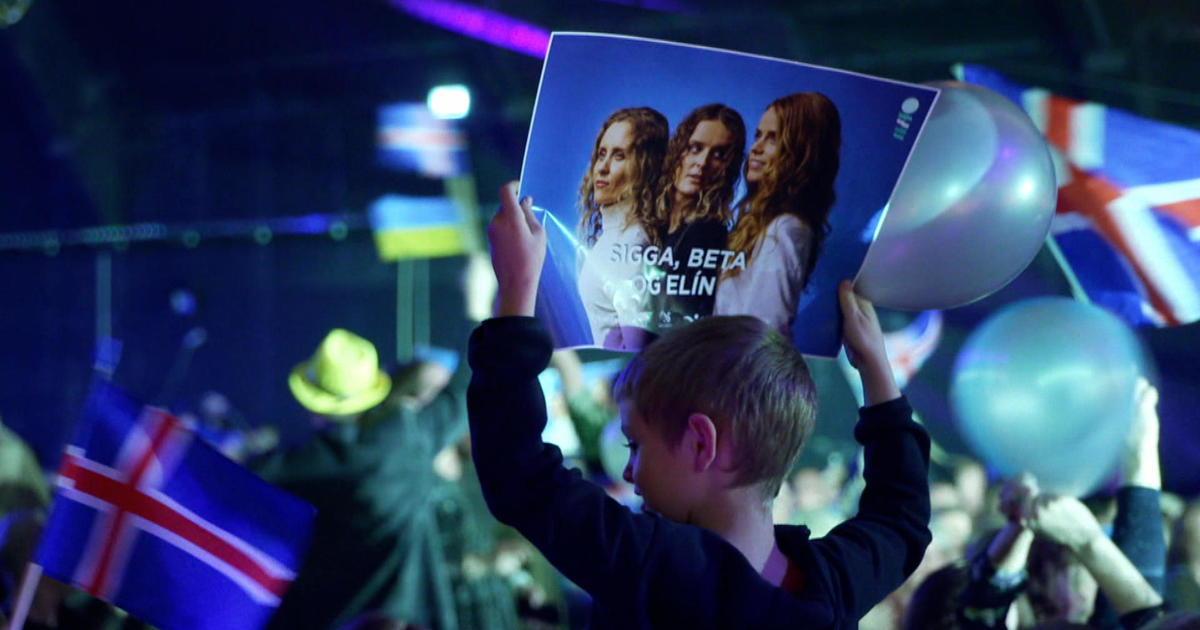 With Europe convulsed by war, a campy, intra-continental song contest might seem especially frivolous. But it’s worth remembering: that was the original point. Eurovision launched in 1956, in part a post World War Two effort to unify Europe. A cross between the Olympics and American Idol, today it’s the world’s largest and wackiest musical event, consuming the continent for weeks each year and culminating in a live TV show. The semifinals and finals draw an audience of more than 180 million for a contest that might pit a Bulgarian crooner against a German disco act—let the glitter and the umlauts fall where they may. Eurovision 2022 concludes in Turin, Italy, later this month. We went to Iceland – a country of 350,000 souls with an outsized passion for Eurovision – to meet their contenders.

For all the snow-capped mountains and rainbows in Reykjavík, the essence of Iceland revealed itself one Saturday in March, inside this fertilizer factory converted into a concert hall.

Daughters of  Reykjavík performance: Take up this stage baby, turn this around…

Rapping their way out of a giant disco ball: the Daughters of Reykjavík, the odds-on favorite to win Iceland’s annual “Söngvakeppnin” or song contest.

It’s a national preliminary – a sort of play-in tournament – to determine who will represent the country at Eurovision in Italy this year.

Jon Wertheim: Tell me the name of the contest.

Jón Jónsson: You got it.

Backstage, the evening’s hosts graciously approved of our pronunciation and explained Eurovision’s appeal.

Björg Magnúsdóttir: We have darkness here, like, nine months a year. So this is kinda the antidepressant (LAUGH) that takes us from darkness into the light. And all the nation– we don’t agree on anything in Iceland in general, except for, like, we love swimming pools and we love Eurovision.

Dancing by itself in the North Atlantic, Iceland uses Eurovision as a bridge to the continent. Land of volcanoes and blue lagoons, once the province of Vikings and now proudly progressive.

Rúnar Gíslason is executive producer of the Icelandic contest and accompanies the winners to Eurovision.

Rúnar Gíslason: We are here very few people in Iceland on an island, isolated. And we just love to meet– the world and connect and unite with people all over the world.

Jon Wertheim: This helps you feel more a part of Europe?

Eurovision is a traveling circus with a big tent, one you truly have to see to believe.

Forty countries send one act—and over the years, they have run the gamut—to perform a three-minute song for a panel of judges and millions of televoters.

No, you cannot vote for your own country. The winning country gets bragging rights and hosts Eurovision the following year.

Italy won last year, for the third time, with the rock act Måneskin.

But a Nordic country lays claim to Eurovision’s most famous winner.

The Swedes – with six wins – are the contest powerhouse…

But no country rocks out to Eurovision harder than Iceland. It joined NATO in 1949, but locals joke the country really arrived on the international scene in 1986 when it was first admitted to Eurovision.

Rúnar Gíslason: The whole nation didn’t think about anything else but the competition.

Rúnar Gíslason: We had watched it for several years and enjoyed it. But now, we were in the competition.

Rúnar Gíslason: We really thought that we would win the competition. We were absolutely sure about that.

Iceland’s president, Guðni Jóhannesson, recalls the letdown. He was 17 then. Now, he is the rare world leader who clears his schedule and opens the doors of his residence to talk Eurovision.

Guðni Jóhannesson: I remember that as if it had– had happened yesterday. It was like, “What?” Zero points for Iceland, and we ended up in 16th place. It was a reality check for us Icelanders.

Jon Wertheim: Help us understand what this contest means to this country.

Guðni Jóhannesson: Well, we’re a small nation. It’s me, my mother, and so on. We still like to believe that we can compete with the big guys and the big girls.

Jon Wertheim: What makes for a good Icelandic entry into this continent-wide contest?

Guðni Jóhannesson: I’m no expert, but the catchiness is the key factor there. It has to be something that grabs you.

At the final round of Söngvakeppnin, five acts belted out original compositions, one catchier than the next.

Rúnar Gíslason: We call it the Icelandic song contest and the Eurovision song contest but everybody knows it’s not only about the song. It’s about the act.

Rúnar Gíslason: It’s about the lightning and the glimmer and the show of it.

The feminist hip-hop collective certainly got that memo.

Jon Wertheim: Tell me the name of your band?

ALL: Daughters of Reykjavík. (LAUGHTER)

Jon Wertheim: How long have you guys all known each other?

Steinunn: We’ve been a band for nine years.

Unquestionably the most chill of Iceland’s hopefuls: sisters, Sigga, Beta, and Elín—their kid brother on drums—performing a country song. Söngvakeppnin Unplugged, as it were.

Music runs in their blood; their mother competed here.

Sigga: But she came second. I was very disappointed. Like, why?

Disappointment is a repeating beat in Iceland’s relationship with Eurovision.

An historian by trade, President Johannesson is a trove of Eurovision trivia.

Guðni Jóhannesson: I can easily recall winning entries. Sandra Kim in ’86, Brotherhood of Man, “Save Your Kisses for Me” in ’76, if I remember correctly.

Jon Wertheim: You know it’d be an act of journalistic malpractice if I didn’t ask you to sing.

That song won for the U.K.

And, while there’s no big check or recording contract at stake, the winner gets an undeniable career boost.

Céline Dion of Quebec went global after a win for Switzerland in the 80s. The rules allow for ringers, explained Dave Goodman on Eurovision, though most acts sing for their native countries.

Dave Goodman: Julio Iglesias did Eurovision in the early 1970s. He sang for Spain.

True, but Iglesias didn’t always care to admit it.

Jon Wertheim: I gather Julio Iglesias wasn’t always so forthcoming about his– his Eurovision past.

Dave Goodman: In the 1980s he’s on record as denying he took part actually. But there was a period when it wasn’t seen as fashionable to say that you’d done this competition. Because it’s changed a lot over the years.

Jon Wertheim: Tell me if I’m wrong, it seems in some corners people might look down – look down their nose at Eurovision.

Dave Goodman: Yeah, there has been certainly over the years the idea that it’s sort of low culture, the Eurovision Song Contest, because it’s popular. Because it’s entertainment.

Dave Goodman: The great thing about Eurovision is that you can come with anything you like.

As Icelanders do, the whole country adopted the look and learned the lyrics.

After performing in the finals, held in Israel that year, Hatari snuck a Palestinian banner under their clothes and raised it on camera.

Jon Wertheim: I gather Iceland was – was fined for that?

Rúnar Gíslason: Yeah. It was 500,000 Icelandic Kronas. That’s not very much. And they should’ve paid it, the guys, but we did.

Jon Wertheim: You paid their fine for them–

Rúnar Gíslason: Yeah, yeah, we didn’t charge them for it.

Dave Goodman: We’re very, very protective of the fact that this isn’t a political program. And not a political competition.

And yet, the union of European Broadcasters that puts on the competition has banned Russia this year. Ukraine, meanwhile, selected its act just days before the invasion.

Jon Wertheim: What can you tell us about the Ukrainian act this year?

Dave Goodman: And their song’s called– “Stefania.” I think it’s a tribute to their mother. We believe that they have dispensation to travel, to come to Turin.

Dave Goodman: To leave Ukraine. We very much hope that we will see them in Turin.

Back in Reykjavík, a group of hardcore fans had Ukraine on their minds as they arrived by chartered party boat for the Icelandic final.

And backstage, it was easy to forget that, ultimately, this is a competition.

Tension emerged later in the evening, as Runar tabulated the results—a mix of the judges’ tallies and fans voting by phone. Iceland’s field was winnowed to two acts: the Daughters and the sisters. Then…

Upset at Söngvakeppnin! Few in the venue were more shocked than the sisters themselves.

Jon Wertheim: I feel like I am talking to athletes after a big game.

Sigga: We feel like that. This is the first time we’ve ever competed in anything. And we suck in sports. And you know, it’s not a typical Eurovision song.

Eytho: This is like an out of body experience right now. You know.

After hugging their parents and – of course – the head of state, Sigga, Beta and Elín set off across Europe on a tour of pre-parties – making new fans on the road to Turin, just as they try to make Eurovision history for their country.

Dave Goodman: A song like Iceland’s can do well. Because it connects. And I think that the secret of Eurovision is creating a connection.

The sisters will perform the song, “Með Hækkandi Sól,” in Icelandic.

Jon Wertheim: Tell me what the lyrics mean.

Sigga: The chorus. “With the darkness of winter the sun rises.”

Jon Wertheim: With all due respect, sounds better in your native tongue–

And so, for all the flaming pianos, Iceland will try and snap its Eurovision losing streak with a harmony about the sun rising after prolonged darkness.

Guðni Jóhannesson: We’re just escaping from this pandemic. There’s a war going on in Europe. Who would’ve believed that? So, Eurovision is fun, it doesn’t matter one thing in the larger scheme of things. But if you’re always gonna think like that– if you’re never gonna have fun then we’re doomed.

Make songs, not war, some things never get lost in translation.