Disney World reopens: Take an inside look at the Magic Kingdom 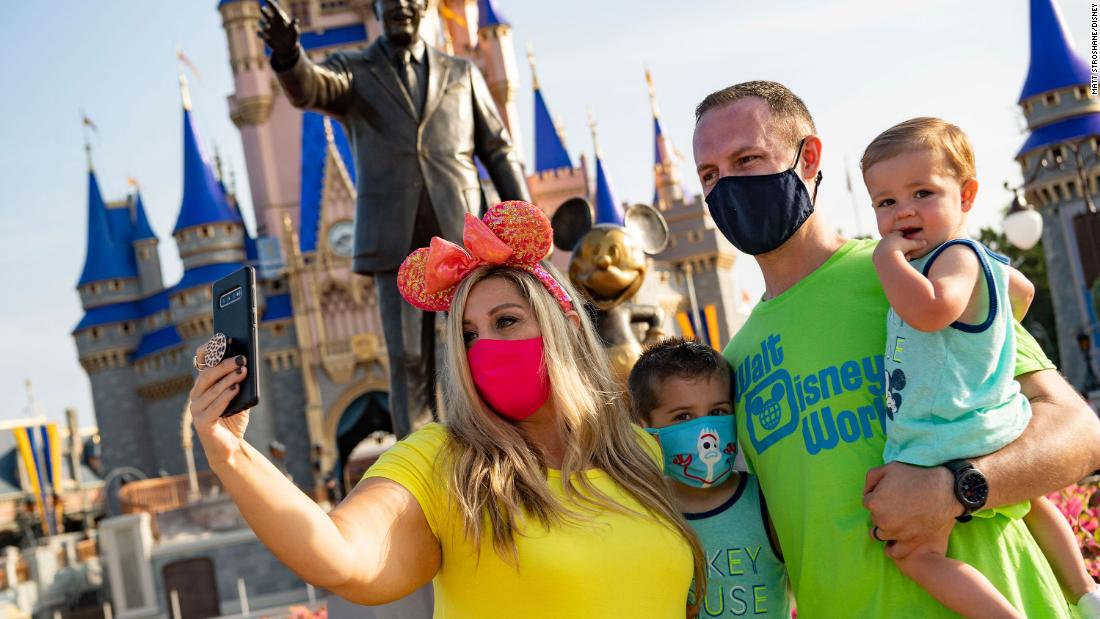 Editor’s Note — Julie Tremaine entered the Magic Kingdom just after 9 a.m. Saturday and stayed until about 6 p.m. for CNN. She’s an award-winning food and travel writer, and her work appears in Travel + Leisure and Forbes among others. Read her at Travel-Sip-Repeat.com.

Orange County, Florida (CNN) — The wait is over.

After closing because of the coronavirus pandemic, Walt Disney World Resort officially reopened two of its four parks — Magic Kingdom and Animal Kingdom — on a scorching Saturday. (Epcot and Hollywood Studios are set to reopen Wednesday).

Over the past week, all eyes have been on Disney World as it prepared for its reopening just one day shy of four months since it closed.

With Florida’s recent surge in Covid-19 infections, some have questioned whether the park should have postponed opening day. But on Saturday morning, thousands of fans walked through the gate to be among the first to reenter the Magic Kingdom.

The park they walked back into, though, is not the same park they left.

Walt Disney World in Orlando, FL is reopening after its closure due to the Covid-19 pandemic, even as the state sees a surge in new cases. Disneyland in California still remains closed until further notice.

The old park thrived on quantity, cramming as many people as possible into ride queues and rewarding those who lined up early in the morning with coveted boarding passes to ride Star Wars: Rise of the Resistance in Disney’s Hollywood Studios.

That park would let you run up to Mickey and hug him, even with no clear idea of who had just done the same thing or when that suit had last been cleaned.

That park didn’t have to worry about whether the invisible spray from someone screaming with delight on a roller coaster would unintentionally infect the person in the next seat.

This new park is different.

The biggest difference: crowd size. Disney doesn’t release attendance numbers, but The New York Times estimated that the park would allow less than half of its capacity in the park to start.

First thing you’ll notice about the new look — it’s not crowded in the Magic Kingdom.

As of July 10, Disney had reached its maximum reservations for Magic Kingdom park tickets for opening day.

Here’s what we saw on Saturday:

All guests will be required to undergo temperature screenings before entering a theme park at Walt Disney World Resort.

For the reopening, each guest has been required to have his or her temperature checked, not at the park gate, but to get on the transportation that brings you to the park. The process is quick and simple.

Bag checks have been minimized as much as possible. Previously, every bag was thoroughly searched. Now, guests are asked to remove any large metal objects from their bags, then carry those bags through metal detectors.

Health safety measures have been a big deal at amusement parks as they open back up.

The main difference between Universal Orlando and Walt Disney World is that at Universal, hand sanitizing is mandatory. There is an employee at the beginning of every ride queue dispensing sanitizer on each person’s hands as they embark.

At Disney, there are sanitizing stations at each ride entrance and many other places. But it’s a personal choice to use them.

Parkgoers can take off their mask in designated Relaxation Stations.

Masks, however, are not up for debate. The only place to get a break from one of those is at Relaxation Stations, which are shaded, socially distanced areas to sit and catch your breath before heading back out to another ride.

“Everything for me has been smooth at Magic Kingdom up until the last 10 minutes. Now I’m seeing people leaving the restroom without washing hands and plenty of men thinking that masks don’t need to cover their noses too. Maybe people can’t have nice things.”

Mickey Mouse will star in the “Mickey and Friends Cavalcade” when Magic Kingdom Park reopens as traditional parades are on temporary hiatus.

Another large difference: performances. Almost all of them have been temporarily suspended, even many of the outdoor shows such as the Dapper Dans, a barbershop quartet that performs up and down Main Street USA.

Character meet-and-greets have been stopped, replaced with drop-in appearances from characters that are unannounced and, without a set schedule, won’t draw the same crowds.

Unexpected small parades were part of the fun on Saturday.

At 12:30 p.m., a socially distanced, scaled-back parade came through the park.

Instead of float after float, with dancers and performers in between, three floats came by in short succession.

The first: Mickey, Minnie, Pluto and Donald. The second: Tinkerbell, sitting on top of an enormous chest of pirate treasure. The third: Clarabelle and Goofy.

Each was surrounded by a team of cast members waving and energetically shouting to people as they passed by. Doing it this way ensures crowds won’t form, and people won’t stand in one spot anticipating the next float to come by.

When it does, it’s a surprise — and from the excitement of the people watching, a very pleasant one.

As the day has progressed in the Magic Kingdom, ride wait times have continued to stay low.

“It’s a five-minute wait time for Space Mountain on a Saturday in the summer,” one park guest told CNN Travel. “I don’t know if I’ll ever see that again.”

The extended line for Seven Dwarfs Mine Train wasn’t needed on opening day.

Even the most in-demand rides, such as the Seven Dwarfs Mine Train, are hovering at about 30 minutes. On busy days, that wait time could be up to 120 minutes.

When ride lines inevitably get longer, they will extend past the traditional ride queues.

In preparation for that, Disney has set up social distancing markers that wrap around the outer fences of rides such as the Mine Train, set up with umbrellas to shade people from the sun.

A word from the chairman

Josh D’Amaro, the chairman of Disney Park, Experiences and Products, made an Instagram post of an “amazing morning” with cast members before the reopening.

Cast members, Disney’s term for their employees, told CNN Travel they are genuinely excited to have the park back up and running. Dozens of them lined the sidewalks of Main Street, waving at and greeting guests as they came in.

“We’re just [as] excited to be here as you are, maybe even more excited,” one said as she was welcoming people in. “I cried on the way to work today. I’ve cried a few times this morning.”

Of course, she said all this through a mask.

Even though there are Mickey, Goofy and Baby Yoda masks available for purchase, those masks are still hard to wear in 89 degree weather and 68% humidity.

Until Friday, neck gaiters were allowed at Disney Springs. On the reopening of the parks, though, masks must affix behind the ears, making gaiters obsolete.

“We come all the time,” said an annual passholder on the Monorail, riding into the park, “but it’s almost taking the fun out of it.”