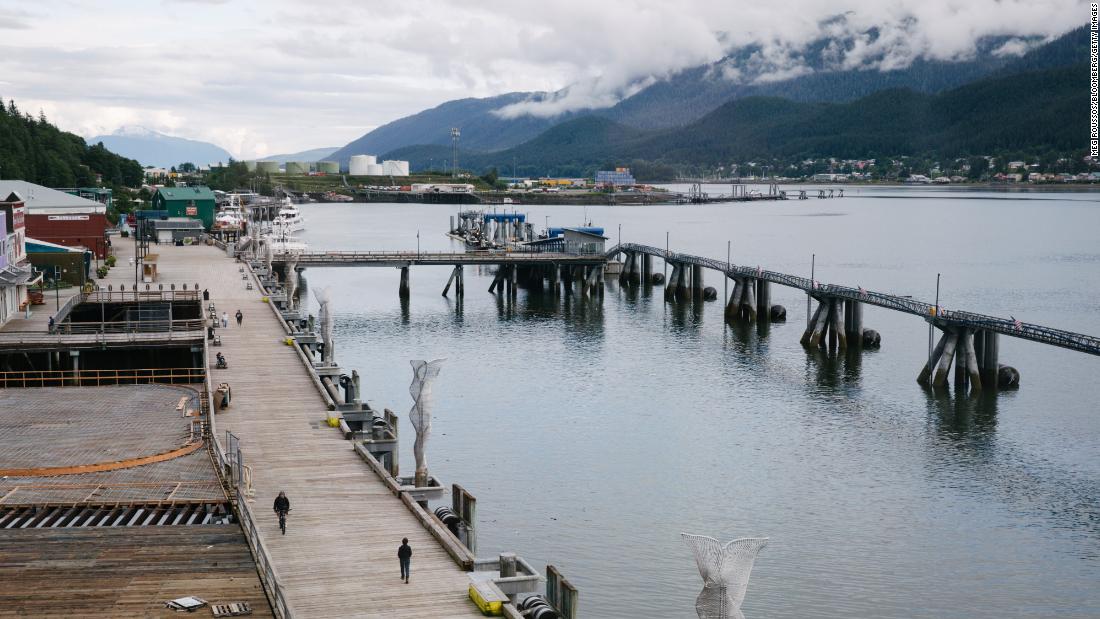 (CNN) — People who have been hoping to cruise the northern waters of North America this summer will have to place their travel dreams in dry dock for now.
Because of the worsening Covid-19 pandemic, Canada has extended its cruise ship ban until February 2022. That affects popular voyages in Canada, including the St. Lawrence River and Maritime Provinces on the Atlantic side to British Columbia along the Pacific Coast.

But the ban extension is also going to hit Alaska and even Seattle, Washington, hard through a combination of geographical proximity and US maritime rules.

What Canada is doing — and why

Big ship cruises to romantic Quebec City on the St. Lawrence River will have to wait for now.

On Thursday, Canadian Minister of Transport Omar Alghabra announced the interim orders that ban pleasure craft in its Arctic waters and cruise vessels in all Canadian waters until February 28, 2022.

The government said “passenger vessels carrying more than 12 people are still prohibited from entering Arctic coastal waters, including Nunatsiavut, Nunavik, and the Labrador Coast. … Pleasure craft used by local Arctic residents will not be affected by these measures.”

But the bigger vacation impact will be for folks who enjoy the big cruise ship experience. Cruise ships that ferry more than 100 passengers will still be prohibited from operating in Canadian waters.

It’s notable that there’s no ban on “smaller cruise ships certified to carry 100 or fewer people.”

“As Canadians continue to do their part to reduce the spread of Covid-19, our government continues to work hard to ensure Canada’s transportation system remains safe,” Alghabra said in the government’s statement. “Temporary prohibitions to cruise vessels and pleasure craft are essential to continue to protect the most vulnerable among our communities.”

If the pandemic situation “sufficiently improves,” Alghabra could rescind orders earlier than February 2022.

How this affects US tourism

Because of geographical proximity, Alaska and Seattle are inexorably tied to their international neighbor. Routes featuring ports such as Seattle, Victoria (Canada), Sitka, Juneau and Glacier Bay have been very popular for decades.

But it’s not just geography that will hurt the US cruise industry. It’s the way maritime law works that gives the ban its sting for America, too.

The Passenger Vessel Services Act allows only vessels flying a US flag to transport passengers directly from one US port to another. All others must make a stop at a foreign port.

For instance, Carnival has most of its ships registered in Panama. And while Holland America’s headquarters are in Seattle, its ships carry the flag of the Netherlands.

So unless it is US-registered, a cruise ship that departs from Seattle for a trip to Alaska and back must first call at a Canadian port. Except for now, it can’t.

Stunning Glacier Bay, Alaska, will be out of reach for many tourists unless Canada is able to rescind an extension of its cruise ship ban.

The news is a blow to Alaska tourism, which is still reeling from 2020.

“No matter who you talk to, it was a stunning morning,” Julie Saupe, president and CEO of Visit Anchorage, told the Anchorage Daily News, the largest newspaper in Alaska.

“The extension of the ‘no-sail’ order in Canadian waters is likely to have large, negative implications for Alaska visitation in the coming summer,” Saupe said in a written statement. She said cruises make up about 40% to 50% of overnight leisure visits to Alaska’s largest city in the summer.

The Canadian announcement has a direct effect on Seattle’s tourist economy.

And CNN affiliate KIRO reported the fallout is being felt in Washington state’s largest city.

“Each homeported vessel brings in over $4 million to the regional economy, $14.5 million in statewide taxes, and generates nearly one-billion dollars in business activity over the whole season,” Port of Seattle spokesman Peter McGraw said in statement.

“We also hear from port cities in Alaska that losing another year of revenue could be cataclysmic. We urge our federal leaders to consider relief for all communities impacted by the declines in travel and tourism.”

Meanwhile, cruise lines do seem to be optimistic for 2022 even if 2021 turns out to be a bust.

For instance, Holland America is offering a seven-day, Seattle-to-Alaska cruise with a stop in Victoria, Canada, in June 2022.
And Princess has a May 2022 route departing Seattle to Alaska — again with the required Canadian stop — starting at $719.