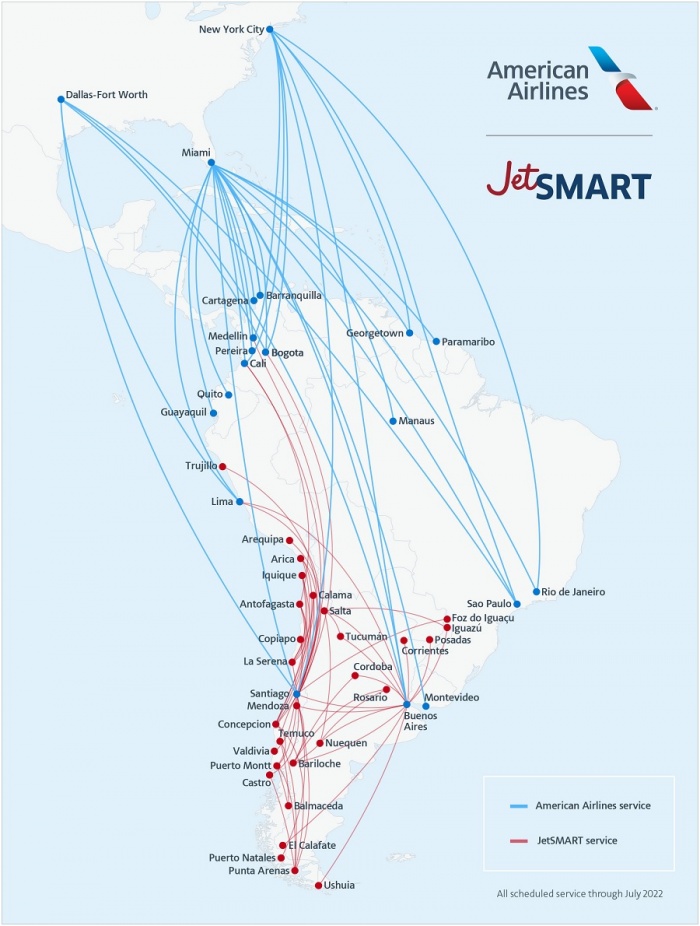 American Airlines and JetSmart have signed a letter of intent to create a joint offering in the Americas.

The proposed partnership would tie together the full-service, global presence of American with the complementary network of the ultra-low-cost carrier in South America.

The pair hope to offer competitive fares and expanded travel options for flyers throughout North and South America.

“This proposed investment in JetSmart would give customers access to the largest network, lowest fares and best travel loyalty program in the Americas,” said Vasu Raja, American chief revenue officer.

“This would enable JetSmart and American to grow aggressively and profitably across Latin America as demand recovers, while preserving the best aspects of each carrier’s business model.”

Operating from Chile and Argentina, JetSmart is a portfolio airline of Indigo Partners, a developer of low-cost airlines.

JetSmart operates a modern fleet of Airbus A320 aircraft and offers short-haul domestic and international service to 33 destinations throughout South America.

American has served Latin America since 1942 and offers service to 17 destinations in South America from its hubs in Dallas-Fort Worth, Miami and New York.

Under the proposed transaction, American would invest in JetSmart to facilitate this growth and give American a minority ownership stake in the short-haul South American carrier.

Additionally, American and Indigo Partners would jointly commit to provide additional capital to fund potential future opportunities in the region.

Estuardo Ortiz, chief executive of JetSmart, added: “By connecting and growing our respective networks, and maintaining our distinct business models, we see a compelling value proposition.

“When completed, this proposed partnership would accelerate our path to becoming the leading South American low-cost carrier while expanding service for American’s customers.”