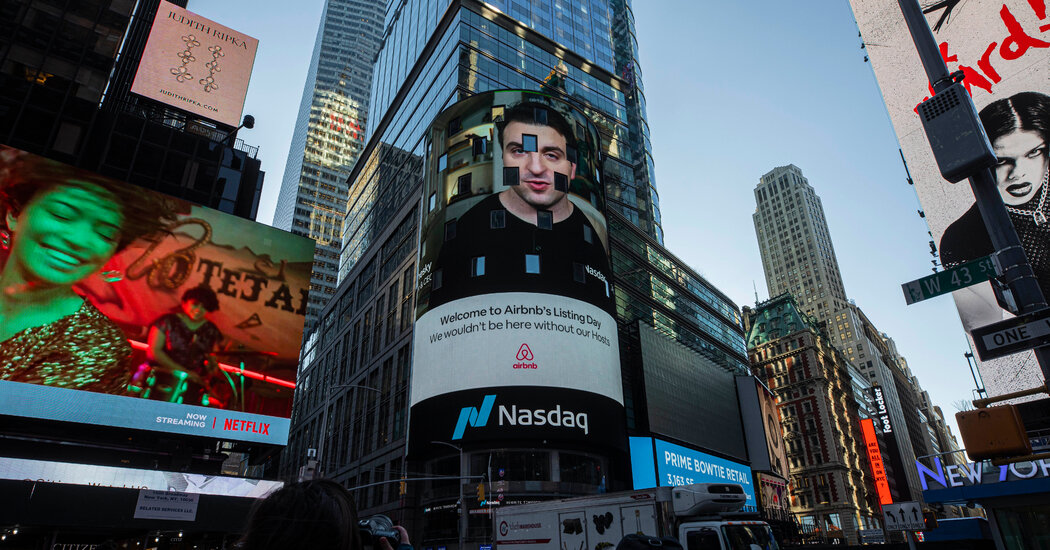 SAN FRANCISCO — Over the last decade, Airbnb has upended the travel industry, riled regulators, frustrated local communities and created a mini-economy of short-term rental operators, all while spinning a warm narrative of belonging and connection.

On Thursday, Airbnb sold investors on an even unlikelier story: that it is a pandemic winner.

The company’s shares skyrocketed on their first day of trading, rising 113 percent above the initial public offering price of $68 to close at $144.71. That put Airbnb’s market capitalization at $100.7 billion — the largest in its generation of “unicorn” companies and more than Expedia Group and Marriott International combined.

Just a day earlier, DoorDash, a food delivery start-up, also defied gravity by raising $3.4 billion in its first day of trading, when its share price surged 86 percent to a valuation of $68 billion. Both debuts followed a string of other hot I.P.O.s that together make 2020 the busiest year for U.S. public offerings since 1999, according to Renaissance Capital, which tracks I.P.O.s.

The hair-bending offerings this week have raised talk of a new stock market bubble in the midst of a pandemic-induced downturn, as more than 947,000 workers filed new claims for state unemployment benefits last week. With interest rates low and fiscal stimulus goosing parts of the economy, investors have chased ever-riskier bets, driving valuations of unprofitable start-ups to levels that seem divorced from reality. Robinhood, a stock trading app whose use has spiked in the pandemic, has also flooded the market with millions of day traders eager to get a piece of brand-name tech companies.

James Gellert, chief executive of Rapid Ratings, a provider of financial analysis, said the “absurd” valuations represented “the extreme exuberance and unprecedented liquidity in the market.” He warned that sentiment could quickly turn, bringing I.P.O. investors “a participation hangover in the coming months.”

Brian Chesky, Airbnb’s chief executive, said in an interview that he felt a “groundswell of enthusiasm” while pitching Airbnb to investors, but would not focus on the company’s short-term stock movements.

The exuberance is a sharp turnaround from last year, when a lackluster I.P.O. from Uber and a failed I.P.O. attempt from the office company WeWork humbled the tech industry, leading to caution and layoffs at the beginning of 2020. The dismay intensified with the onset of the pandemic, with many start-ups cutting back in anticipation of a slowdown.

But over the summer, the tech industry surged and the stock market came roaring back. A wave of tech I.P.O.s delivered gushers of cash to Silicon Valley start-ups, their investors, founders and employees. Airbnb’s valuation now tops Uber’s and approaches the level of Facebook’s at its I.P.O. in 2012. The e-commerce start-up Wish, the game maker Roblox and the home-buying company OpenDoor also plan to go public this month.

Unlike the other start-ups, which have seen demand for their products soar in the pandemic, Airbnb spent most of the year reeling as people canceled their bookings. In the first nine months, Airbnb brought in $2.5 billion in revenue, down from $3.7 billion a year earlier. It lost $697 million during that time, more than double last year.

In April, it raised emergency funding, closed certain side projects and shelved its I.P.O. plans. In May, the company laid off a quarter of its roughly 7,600 workers.

To convince investors it belonged in the same category as “Covid-winners,” Airbnb’s offering prospectus presented a grand vision. The financial document featured magazine-style spreads of guests and renters in beautiful settings. It argued that it had invented a new kind of travel while also providing economic stimulus, a cure for loneliness and spreading “healthy tourism.” And it unfurled a well-worn underdog narrative of resilience and redemption.

A letter signed by Airbnb’s founders — Mr. Chesky, Joe Gebbia and Nathan Blecharzyk — included talking points that Mr. Chesky has repeated in numerous interviews praising the clarity the crisis had given him. The company emphasized that its home rentals could cater to travelers taking road trips outside cities and that its bookings began rebounding two months into the pandemic. The prospectus even argued that the pandemic had accelerated Mr. Chesky’s bold prediction that people would someday “live anywhere.”

Those messages resonated with investors. “People are interested in the name, not the financials,” Mr. Gellert said. “This is a company that is going in the wrong direction today, from a financial strength perspective.”

The pandemic was especially difficult for Airbnb because it has largely had a rocket-ship trajectory that made it the toast of Silicon Valley. The company was founded in 2008 as a way to let people rent out an extra room and quickly expanded to a network of seven million home rentals around the world.

Airbnb embodies the last decade of highly valued start-ups that used gig work, smartphones and piles of venture capital to upend old industries, grow fast, put off going public and worry about profits later. Its rapid rise brought the idea of vacation homes — and tourists — into city apartments and residential neighborhoods. Its founders pitched messages of trust, community and living like a local.

“When we reflect back on meeting Brian, Joe and Nate, it was just their ability to tell a story of a world that is very different than what exists,” said Alfred Lin, an investor at Sequoia Capital and a member of Airbnb’s board.

Along the way, Airbnb has faced regulations and stricter rules for home rentals. The company has grappled with safety concerns over parties thrown at its rentals, guests who trashed their places, fraudulent listings, hidden cameras and hosts who racially discriminated against guests.

Those challenges have persisted as business has returned in the pandemic. Parties have proliferated, and neighbors of Airbnb listings have become more vocal in their complaints. Hosts have become angry with the company for overriding their cancellation policies during the pandemic. Cities have begun to explore stricter regulations.

Airbnb acknowledged those risks in its offering prospectus while emphasizing its ability to adapt in the face of disaster. In the interview, Mr. Chesky said that Airbnb did not expect business travel or mass tourism to bounce back anytime soon, but that the company was well positioned to cater to other kinds of guests.

He mentioned how Airbnb could cater to those seeking outdoor activities and longer-term stays, as well as college students who couldn’t return home.

“If there was ever a moment in time that we’d ever demonstrate we’re adaptable, it would be a pandemic,” Mr. Chesky said.